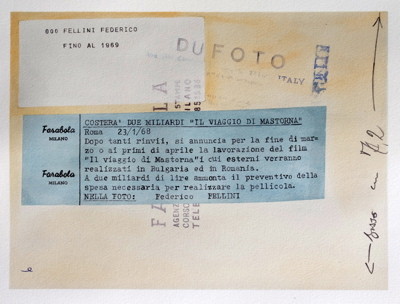 Magazzino is pleased to announce All I Remember, Elisabetta Benassiʼs second solo exhibition in the gallery, opening on Tuesday May 11th and on view through June 30th 2010. Elisabetta Benassi has chosen All I Remember, the title of an unpublished novel by Gertrude Stein, to bear witness to the realization of an endeavour begun three years ago. In that time, the artist has started to assimilate a library of images of the backs of photographs drawn from the annals of Italian and international press archives. These images contain, among other information, an abundance of captions, dates, archival references, and handwritten notes essential for the publication of the photographs.
The backs of these photographs—themselves images, though primarily textual—shape an archive-in-progress in which scenes of grand Historical importance are intermixed with others from everyday news. Together, they create an unusual portrait of the 20th century; one that can only be imagined via the words that describe it. The artist deprives the viewer of the photographic image, and with it, the value of the image as a imulacrum; the ʻimages without imagesʼ are presented via a modified microfiche viewer entitled Memorie di un cieco (memories of a blind man) and invite the viewer down a path through a new iconology of the 20th century.
In another room of the gallery, the artist presents Them, a series of watercolours portraying the backsides of a selection of these archival photographs. These images are reproduced manually in a manner that is both manic and exact. The method functions as a mechanism for reconstructing memory, detached from any iconographic aspect — a diversion within the formation process of our imagery.
Finally, a Morse-code lamp used to send signals between warships projects coded messages from the gallery to the street outside, reconnecting the exhibition space to an everyday space — the ʻaheadʼ that we left behind upon entering.

The exhibition is accompanied by an interview by Cloe Piccoli and a critical contribution by Andrea Cortellessa.