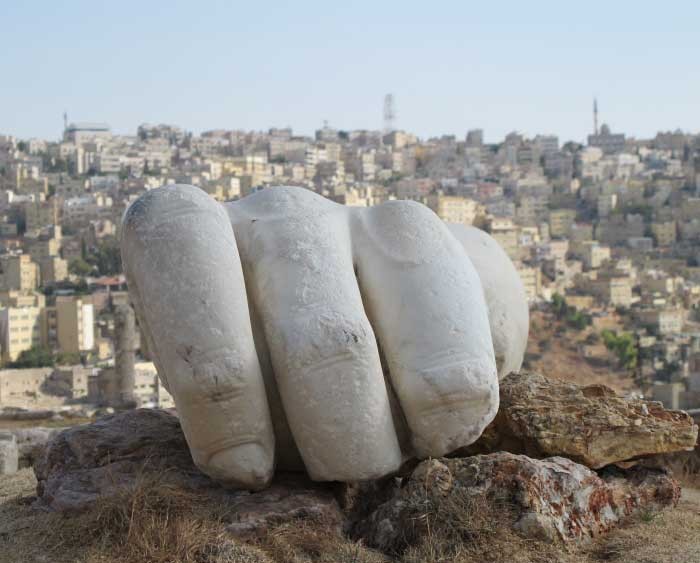 Magazzino is pleased to present a new exhibition by Gianluca Malgeri entitled Insha’Allah. For his second solo exhibition with the gallery, Malgeri will present the first formalization of a work in progress that has been developed throughout the last 15 months, during which the artist travelled between Jordan, Turkey and Italy.
The exhibition results from a reflection over the concept of mapping, intended as a formation and description of a non-physical space, transformed by Malgeri into a series of rooms connoted by an imagery that refer to a cultural territory in continuous oscillation. Within this territory and this mapping, there is a series of objects, images and testimonies collected by the artist and arranged in a path marked by constant tension between elements, within the exhibition and within the works themselves, where they coexist and overlap common polarities: East and West, male and female, rationalism and empiricism.
Thus the map is translated into a sign inscribed on the human figure, which is drawn with a sense of ambiguity between female characteristics and a constant suggestion generated – in turn – by iconic male figures in the history of art, such as San Sebastian, Adam, or Orpheus. The idea of presenting a collection without an order is one of the expedients that Malgeri uses to draw this map; the collection that Malgeri shows is not linked to the found object tout court: its contents are in facts projections, reconstructions, synthesis of information and images chosen by the artist to describe the territory of his orientalism, which excludes form but assumes the experiential datum as subjective and objective at the same time.
The odalisque, the eunuch, ancient coins, breads, flowers (just to mention some of the references) are objective translations of an abstract that comes before the image and its origin. As in a new mythology, Malgeri invites to reconsider the characteristics of what we commonly call "culture" that sinks its roots much deeper than the old rationalism tends to give.
Con un contributo critico di Rusen Aktas.
www.magazzinoartemoderna.com