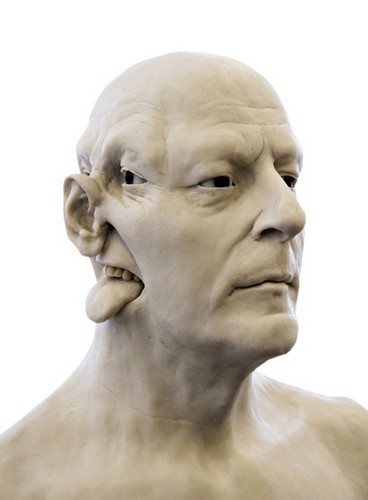 Magazzino is pleased to announce La Metamorfosi dell’Artista, Jan Fabre’s second solo exhibition at the gallery. Fabre will present new and recent video, sculpture, photography and drawings born from his enduring fascination with the body and, most directly, from his 2008 performance in the Louvre’s Galerie Daru entitled Art kept me out of jail / Homage to Jacques Mesrine.

Mesrine, the infamous French celebrity criminal, was as well known for his incredible escapes as he was for the scale and scope of his crimes. In the film ‘Art kept me out of Jail’ Fabre slips into the many guises of Mesrine as he sneaks and sprints through the Louvre, struggling to break free of ‘the greatest prison in France’. Through the figure of Mesrine, Fabre addresses the metamorphosis of identity – a human quality that endures, and yet is perpetually in flux – and the possibility for freedom after identity has fallen away.

From the time of the first presentations of his provocative ‘actions’ and ‘private performances’ in the 1970s, Jan Fabre has created an extraordinary, cross-disciplinary body of work to which the human condition is central. Fabre’s work is strikingly visceral, using every constitutive element available—wax, blood, clay, bic pen ink, beetle shells, the written word, installation, the stage and the artist’s own body – to name but a few – to elicit new models of perception.

A draftsman, sculptor, script-writer and dramatist, Fabre has presented his work at the Venice, Istanbul, São Paulo Biennales and at the Documenta; his solo exhibitions include the Louvre, the Kunsthaus Bregenz, the Stedelijk Museum Amsterdam, the Kunsthalle in Basel, the MUHKA Museum of Antwerp and the Schirn Kunsthalle of Frankfurt among others. Fabre’s theatre company, Troubleyn, was launched in 1986 and continues to appear at leading venues worldwide.