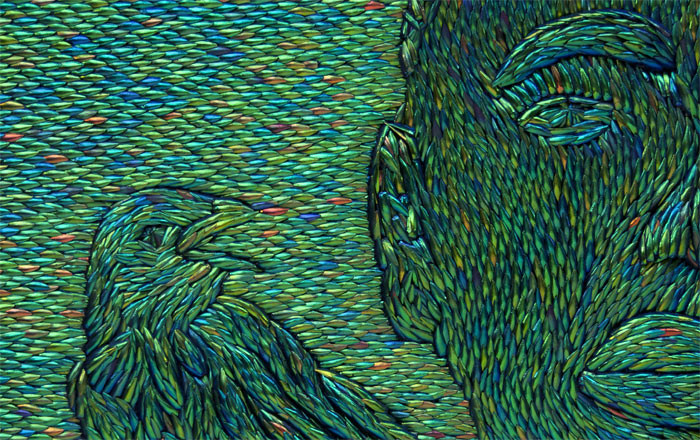 Magazzino is pleased to announce Tribute to Hieronymus Bosch in Congo, the third solo show by Jan Fabre in our gallery: the artist presents for this occasion seven new works of great visual impact.

Jab Fabre defines himself as a warrior of beauty, a knight of despair. Visual artist, theatre-maker and author, he has built up a sizeable oeuvre that is internationally acclaimed. Researching his own body, the environment and the social dynamics, he strives for answers through various disciplines and expressions.
The artist once again engages in a historic encounter, between the history of his native country, Belgium, its presence in the Congo’s colony and the iconography of Flemish art Master Hieronymus Bosch. The visionary Bosch, his monsters and fantasies meet the imaginary and symbols of the history of Congo, a story of the achievements and failures of Belgium during the last century.

Before the Congo became a colonial possession of the Belgian state, it could best be described as a rich and undeveloped private garden of the Belgian monarch Leopold II. At the end of the 19th century, this same Leopold decided to establish the Museum of Central Africa just outside Brussels. This Belgian ‘Petit Palais’, was a depository for the King’s colonial finds rather than a museum.
The black, golden heart of Africa is a dark page in Belgian national and colonial history. The geological and cultural wealth of that country was for decades the ‘locus delicti’ of dehumanized and patriarchal acts whose consequences are still to be seen in Central Africa today. (Philippe Van Cauteren, “Heart of darkness. Letter to Jan Fabre”).

Fabre’s work is like a skeletal exterior in which a new vibrating membrane of light has been added. Beetles carapaces which absorbs the light only to discharge it again, with a myriad of facets colored green, blue or orange according to the direction of the light and the perspective of the viewer, look just like late classical mosaic tiles, their strength of color undimmed, everlasting. (Jan Hoet, “A membrane of light”).

This new installation tells of human life and of metamorphosis, both natural and forced. The concept of metamorphosis is interpreted by the artist in many ways and always symbolizes the infinite desire of Jan Fabre to merge mind and body, animal and human, life and death.


Jan Fabre was born in Antwerp in 1958, where he lives and works. He has taken part in numerous international exhibitions including the Venice Biennale, Documenta in Kassel, the Sao Paolo Biennale, the Lyon Biennale, the Valencia Biennale and the Instanbul Biennale. Other serecent and leading exhibitions include Anthropology of a Planet at Palazzo Benzon, Venice (2007)), Jan Fabre au Louvre. L'Ange de la métamorphose, Musee du Louvre, Paris, (2008), From the Cellar to the Attic. From the Feet to the Brain at Kunsthaus of Bregenz (2008), From the Feet to the Brain in the Arsenale Novissimo, Venice (2009), Jan Fabre, Hortus/Corpus at Kroller Muller Museum, Otterlo (2011), The year of the Hour Blue at Kunsthistorisches Museum, Wien (2011).
www.magazzinoartemoderna.com