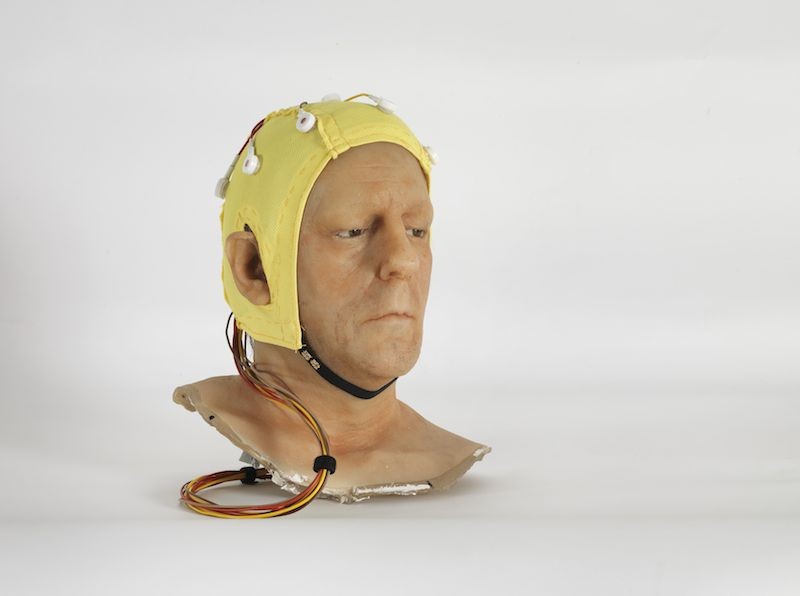 Magazzino is proud to announce the fourth exhibition by Jan Fabre in the gallery, three years after Tribute to Hiëronymus Bosch in Congo in 2011. For this occasion, Fabre will present for the first time in Italy the film Do we feel with our brain and think with our heart?, the result of a three year journey with the prominent scientist Giacomo Rizzolatti. In many of his recent works Fabre researches a dialogue between art and science, being inspired particularly by neurology over the last ten years, a time during which this dialogue was practically enacted through collaborations with several famous scientists. Do we feel with our brain and think with our heart? is the result of a dialogue between the artist and famous Italian neurobiologist Giacomo Rizzolatti, the man behind the major discovery of mirror neurons, which form the basis for our capacity for empathy.
In his quest to investigate the brain, Fabre realized a series of Carrara marble sculptures where, between the base lobes, veins and arteries, he creates startling associations with objects, fruits and food used in Rizzolatti’s experiments. In a deep, sincere but also surreal dialogue between the artist and the scientist, crucial themes to the artistic creation – imitation and empathy, the emotional and cognitive states, are explored. Fabre then turns out these arguments into sculptures and drawings (that very often draw from references to art history) that explore the poetic possibilities and the intrinsic beauty of the brain as a physical seat of creativity and thought.
In her text written for the exhibition, Melania Rossi notes that “the work therefore also offers a type of philosophical and aesthetic speculation, in the purest sense of the word. Moreover, the term ‘aesthetics’ originates from the Greek word αἴσθησις, which means ‘sensation’. In classical art the brain undoubtedly recognises the golden ratios, but how can one measure the beauty of chaos, or intelligence, in contemporary art? It is like a code without a key to decipher it. Science certainly cannot extract the content from its analysis, and the work constantly continues to evade us, remaining ineffable. It is therefore best to accept the circularity of comprehension and pleasure, and try to keep sensation, emotion and perception united.”
For over 35 years, Jan Fabre has emerged internationally as one of the most innovative visual artist, theater artist and author of his generation. With L’Ange de la Métamorphose in 2008, he was the first living artist to be invited to exhibit at the Louvre Museum in Paris. Among his most important solo exhibitions of the last years we can cite Hortus/Corpus at Kröller-Müller Museum in Otterlo in the Netherlands (2011) and The Years of the Hour Blue at the Kunsthistorisches Museum in Vienna (2011). Until February 16 of this year, the MAXXI Museum in Rome made the first retrospective about Fabre’s activities as a performance artist. Stigmata, Actions et Performances 1976-2013 will then be shown in other museums such as M HKA in Antwerp in March 2015. The PinchukArtCenter in Kiev presents a two part exhibition until October 2015 : Tribute to Hiëronymus Bosch in Congo (2011-2013) and Tribute to Belgian Congo (2010-2013). At the Royal Museums of Fine Arts of Belgium, are shown Le Regard en Dedans (l’Heure Bleue) (2011-2013) – a permanent installation created by Jan Fabre for the Royal Staircase of the museum – as well as the classical display Chapters I-XVIII. Waxes & Bronzes (2010), two of whose have been donated to the Uffizi Museum in Florence.
We are also happy to indicate the exhibition opening at RAM radioartemobile IS THE BRAIN THE MOST SEXY PART OF THE BODY? (Homage to Jan Hoet by Jan F. and Mario P. ) – RAM radioartemobile – Via Conte Verde 15 – Roma – tuesday 14 october 2014 – Round table 4pm; opening 5.30pm; until 28 november 2014
www.magazzinoartemoderna.com