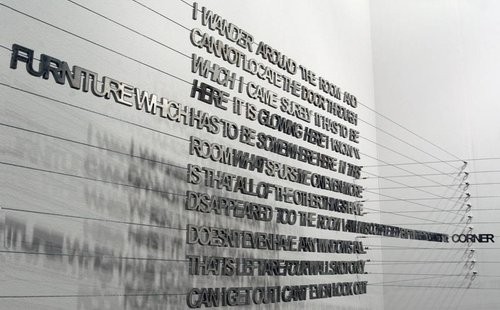 On 28 September 2010 Magazzino will inaugurate the new exhibition season with the show “Landscapes” / (confini in disordine) curated by Lorenzo Bruni, in the gallery space and simultaneusly in an offsite location in the Church of San Filippino in via Giulia n. 134. Landscapes / (confini in disordine) is the first of two shows that Lorenzo Bruni will curate for Magazzino, and centers upon the concept of the paesaggio. The second will open in September 2011 and the series will be documented in a comprehensive publication.

Roberto Ago, Slater Bradley, Pavel Buchler, Fernando Sánchez Castillo, Sabina Grasso, Dmitry Gutov, Yuki Ichihashi, Jiri Kovanda, Antony McCall, Ján Mančuška and Paolo Parisi are international artists of different generations and cultural provenances who present work that shares a common reflection on the concept of the landscape. To this theme, which appears almost banal in a time dominated by the continuous exchange of images and in which the sensation that what is far away may be kept close at hand, the artists respond with work that highlights the space occupied in a specific moment by the spectator or the temporal instant in which a particular image of the world is realized. Here, the term “landscape” in the classical sense is negated and deconstructed, as the space of a particular experience is represented rather than its image. These are not works to be observed passively, but to be processed mentally or physically. Indeed, the landscape for these artists cannot exist as an abstract concept but only in relation to the viewer.

At the beginning of the 20th century, George Simmel described a landscape as an image separate from the space inhabited at a given moment by its spectator. When the observer reaches a horizon, in other words, it ceases to be a confine or a limit and becomes a space in and of itself. The 20th century, as described by Rosalind Krauss while reflecting on the idea of sculpture, is the age in which art evolved, breaking time and time again the codification with which society recognizes any given product as art. This route is characterized above all by an attempt to make the space of the artwork match with the portion of the real occupied by the spectator, that is, two dimensions of space which are usually interchangeable, though indeed never co-existent, in the experience of the spectator (this aspect is evident when one considers figurative painting). Today with the progressive dematerialization of the real which we have been witnessing these past decades (the objects with which we comunicate and transmit images have become smaller and smaller) we should perhaps reconsider the relation between the observed and practical space.

The works included in the exhibition reflect, through different modes, the contradiction that exists between the observation and the experience of a place, thus introducing the idea of a constant construction of landscape as collective identity, and its possible planning. Pavel Buchler's paintings appear as abstract puzzles obtained by inverting and washing discarded landscape paintings rescued from junk stalls. A two-color panel by Roberto Ago conjures a specific image of nature with the phrase imagine if... that begins the story printed on it. The paintings of Fernando Sánchez Castillo reflect upon the common codes through which we recognize the dignity of the collective memory of certain episodes. They draw upon art historical tranditions ranging from landscape painting at the end of the 19th century to Post-War abstraction and address subjects such as scenes from the Spanish Civil War and the events of 1968. Paolo Parisi's image Under the bridge (Simeto) and his seat-sculptures are works that concern the dialogue between the bi-dimensionality of the drawing and the physical space between natural elements (sky-glass and sea-water) and the people who stop at their intersection. Ján Mančuška’s work Guided by the walls is an installation in which sentences in metal letters mark the space of a room by comparing the physical experience (the walk follows the course of reading) with the emotion (evoked by the text) of being in that place. The installation by Dmitry Gutov, A dog, is a tribute to man’s instinct to discover new territories to claim them as his own, evoking the simple act of a dog marking its territory. The work Untitled by Jiri Kovanda defines a horizon within the gallery space using plastic spoons, evoking the codes of minimalism while reversing them and creating an event via the dripping of vodka contained in the spoons.

The images of the world and the interventions in the exhibition spaces reflect on the concept of the landscape, relating it to the opportunity to map, to invent and to consider the landscape within the dialogue of “the other, the different”. These traditional methods of orienting one’s self strongly differ from those available today (GPS systems, for example, that facilitate movement in real space) because they establish a personal, subjective, shareable experience, rather than a detached and objective one, of a given time-space context.