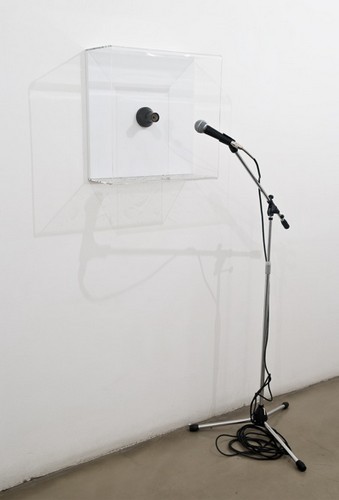 Magazzino is pleased to announce the opening of Three quarter-tone pieces, the new solo exhibition by Massimo Bartolini.
Bartolini’s creative path is focused on the study of perception and the conditions of the relation between man and the surrounding environment. For this reason his works – whether in installation, video or photography –involve the viewer in a full phenomenological experience. In this show, the most stimulated sense is hearing; the work in Three quarter-tone pieces is motivated entirely by Bartolini’s interest in music and in the relation between sound, space and the viewer.

Three quarter-tone pieces is the title of a composition by Charles Ives for two pianos, one of which is tuned a quarter-tone above the other. With this particular tuning, it is possible to have very unusual micro-tonalities and sounds that lie outside the tempered notation. The “temperament” consists in ordering sounds around a tone and dividing them into semi-tones, ignoring all the notes that are in-between the tone and the semi-tone. “The tempered system is the result of a long historical process of a particular civilization (ours) that has become the dominating one in the world, after a historical process as complex as it has been long, so long and complex, the whole, that its forms and structures appear as natural and eternal formations; so, melodic processes that have been implemented in various cultures (and in very different ways) dispersed throughout time and space become curious and laboratorial experiments.” (E.Marraffa)

Three quarter-tone pieces can be included in this category of experiments to which Edoardo Marraffa refers above. Bartolini’sThree quarter-tone pieces are a closet, a blanket chest and a kitchen wall unit, transformed into pipe-organ basses. The composition of the furniture and their geometric forms are broken by the organs’ pipes and by the sound that animates the form itself. The colors of the furniture visually identify the played note according to the system developed by Louis Bertrand Castel in 1725 for the realization of his ocular harpsichord. Each of the three pieces of furniture (whose name can be read also as “piece”, as a synonym of opera piece) is tampered with and modified into a three-pipe organ and tuned with a quarter-tone difference from the other. The three furniture-organs play simultaneously, forming a chord where harmony is not a usual harmony and resonances weave unpredictably.

In the room adjacent to Three quarter-tone pieces will be three small monochrome paintings from the Dew series.
In the gallery adjacent to the office, will be the work Ouverture per Pietro. The work is a light and sound-emitting device dedicated to Pietro Riparbelli, with whom the artist has already collaborated. There will be two performances on the opening evening: a concert by Pietro Riparbelli and Rosy Ninivaggi as part of the project Kaula and afterward, Concert with three pieces of furniture by Edoardo Marraffa.