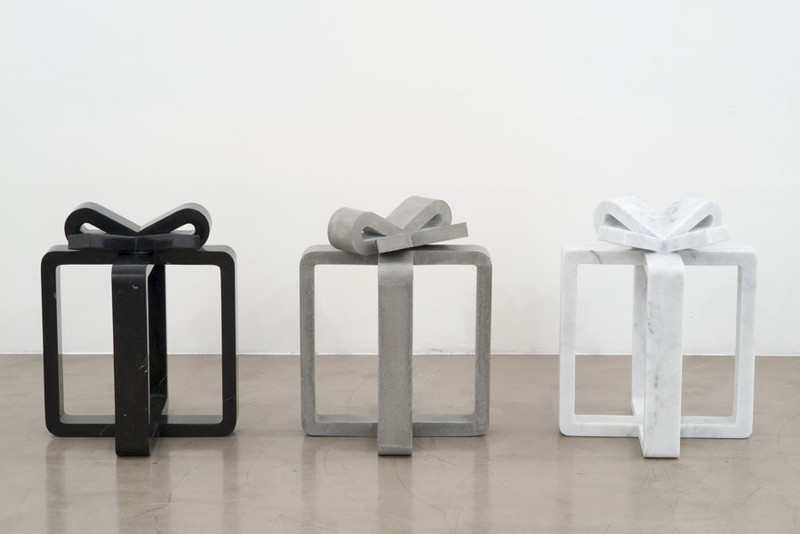 Magazzino is pleased to announce Ti do la mia giovinezza, a new solo exhibition by Mircea Cantor. Two years after his solo exhibition at MACRO in 2012, Cantor (b. Oradea, 1977; lives and works in Paris) returns with an exhibition project based on new works created specifically for the gallery.
Mircea Cantor brings a formal and aesthetic simplicity with strong poetical and political connotations, where “political” is understood as a capacity to act on the present and the individual (often referred to as a subject, namely, a person) through association with universal themes

Future Gifts is a work based on a large installation that he originally created in 2008 at the Kunsthalle Mucsarnok in Budapest, featuring seven concrete sculptures (all at different scales) portraying gift boxes, in which only the ribbon and bow were visible. The 2014 version of The Future Gifts are forged from three different materials to make a total of twenty-one sculptures scattered around the gallery space. As the play on words in the title suggests, Future Gifts generates a short-circuit in which the gift (that is, by its very nature, something given, ceded, extant) is exposed as a void that imbues the future with the possibility of it becoming real. Though this void seems to contradict the very nature of the gift, Cantor fills this void with positive and universal potential, with a genuine and natural aspiration towards fulfillment.
The numeric relationship between the various elements that make up the work (seven exemplars made from three different materials), as pointed out by Giacinto di Pietrantonio in his critical text, also looms large in the work Il A.M. della mia vita, in which an antique golden coin is balanced on a small iron fence (which has three horizontal and seven vertical bars). These works evoke the ideas of boundary (the ribbon that outlines the gift/void, the fence that isolates a portion of space made inaccessible) and aspiration (the coin, a precious object kept out of reach and in perennial balance between “our” space and a space we cannot access, as well as the gift, metaphor of desire and satisfaction, both of which are projected in a place that is both virtual (the void) and physical (beyond the fence), in any event in a place outside our sphere of sensation. Cantor undertakes an operation of subtraction whose product is a combination of voids physical and metaphorical that exist in an undefined further space where, in this negation, he suggests the positive gesture of future opportunity.
The third work in the show, which also lends the exhibition its title, is the neon sculpture Ti do la mia giovinezza (I give you my youth). This simple yet subtle statement conceals deep significance: youth as a state of mind, an aspiration to grand ideals, love, glory, life and the great beyond; youth as a commodity exchange, perhaps, but above all, youth as a matter of sacrifice, as a final (and perhaps unique) element we may truly own during the course of our existence.
The exhibition finds its perfect conclusion with the video Regalo, in which a kid repeats in an innocent and spontaneous tone the Italian sentence non posso darti nulla (“I can’t give you anything”). What is suggested as given or denied in the show finds its counterpoint – and ultimate completion – in this work: disarmingly simple, but again referring to a universal condition. Paradoxically, much as Ti do la mia giovinezza sounds like an epitaph, Regalo sounds like a eulogy: it is youth that negates itself, suspended in a present/future of which, at this stage, we as witnesses should be more aware.
www.magazzinoartemoderna.com