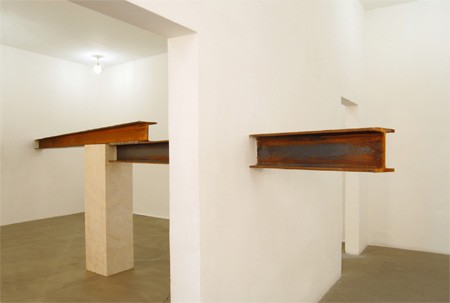 The solo show by Pedro Cabrita Reis is the next appointment with Altre voci, altre stanze/Other Voices, Other Rooms, curated by Cloe Piccoli at the Magazzino d’Arte Moderna.
Over the last few years Altre voci, altre stanze/Other Voices, Other Rooms has investigated, through site-specific works specially created for Rome, some of the most interesting aspects of the complex territory in which art and architecture converge.
Abstract or utilizable spaces, true works of architecture or virtual simulations, projects in miniature or interventions in real buildings, public and site-specific works produced for solo shows by Massimo Bartolini, Atelier van Lieshout, Vedovamazzei, Daniele Puppi, Jonas Dahlberg, Alberto Garutti, Darius Ziura, and Pedro Cabrita Reis have become part of a context of international research involving artists, architects and urban planners.
For Altre voci, altre stanze/Other Voices, Other Rooms each artist has created a work that focuses on space, calling into play the very concept of architecture in all senses of the term, from the political to the social to the anthropological, while also touching on poetic, individual aspects.
Some of the invited artists have established a direct relationship with urban and architectural reality (Atelier van Lieshout, Alberto Garutti), while others have reflected on space as a place of individual experience (Massimo Bartolini, Daniele Puppi). Vedovamazzei addressed the historical and anthropological sides of architecture, Jonas Dahlberg explored the relations between individual and shared spaces, while Darius Ziura tracked down historical and social architectural forms in the physiognomy of individuals. In each approach space becomes a tool of investigation and experience of the real, in which public and private intersect, and the line of demarcation between the personal and collective dimensions becomes variable.
Now Pedro Cabrita Reis, one of the most interesting artists on the international scene for his work on architecture, has created for Altre voci, altre stanze/Other Voices, Other Rooms Non è mai una questione di equilibrio (It’s never a question of balance), an important site-specific work in which the intervention in the gallery space evokes the memory and meaning of architecture, understood in Hegelian terms as the first art, the one that forms the basis for all the others. But the intervention in the gallery also makes precise reference to the context of the space on Via dei Prefetti and the history of Rome. One of the construction parts par excellence, a steel girder, pierces the void of the gallery and rends a wall, stopping in mid-air, in a state of apparently precarious balance. Cabrita Reis thus reflects on stability and risk, weight and lightness, and on an aptitude for construction as a metaphor for existence.
Since the early 1990s Pedro Cabrita Reis has made masterly use of the materials of architecture – concrete, bricks, wood, steel and other metals, as well as fragments of real works of architecture – combining them with elements of the visual arts like enamels, pigments and neon lights to create poetic, imaginative works of forceful political impact, narrating memories connected with the context in which they are placed and the context of their origin. Significant examples include I Dreamt Your House was a Line (2003), at the University of Massachusetts Dartmouth, Longer Journeys (2003), at the Antichi Granai della Giudecca in Venice for the Portuguese Pavilion of the Venice Biennial, and the work made in 2005 for ARCOS, the Contemporary Art Museum of Sannio in Benevento, Italy.