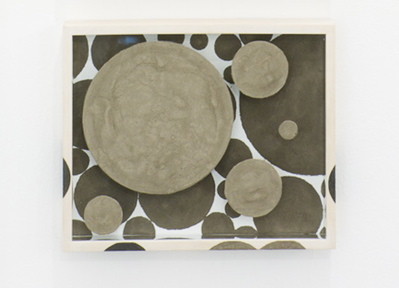 Magazzino is pleased to announce the new show by Vedovamazzei, which will open on Saturday December 18th 7pm, and will be visible until February 16th 2011.

For their fourth solo show in the gallery Vedovamazzei present a series of new works with different media, ranging from drawing to painting, from assemblage to installation. These works speak openly about the idea of tranformation, exchange of state, material metamorphosis.

Seven works by Vedovamazzei is a show on life, seen from the point of view of death, where decay and disintegration are necessary premises of the creative process: whereby ashes become pictorial substance, glue or assembling material, and whereby cigarette papers are aligned and transformed into a support – zero grade of creative process, but at the same time, final point of the artistic action. An action where, materially, the saliva used to melt the papers is the medium, the living substance that, disappearing, leaves the objectivity of a new being.

All these elements give the idea of artistic practice as a continuous process of manipulation and transformation, which can be endless or an end in and of itself., wherein the more minimal the gesture, the more exaggerated the result and vice-versa.

Thus, works become the many and possible reifications, stopped instants of an ineluctable cycle, which suggest death as an opportunity for a new life.

Vedovamazzei is the name of the artistic partnership founded in 1991 by Stella Scala (1964) and Simeone Crispino (1962). Their work is based on the use of different media like video, installation, sculpture, photography, manipulation and use of natural elements, as well as more traditional medium like painting, watercolour and drawing. The urge in vedovamazzei’s work is the necessity to look beyond appearances, observing the iconographical origin of objects and their symbolical value; the often implied absurdity of their works invites to a reflection over arts and its formal and intellectual premises.