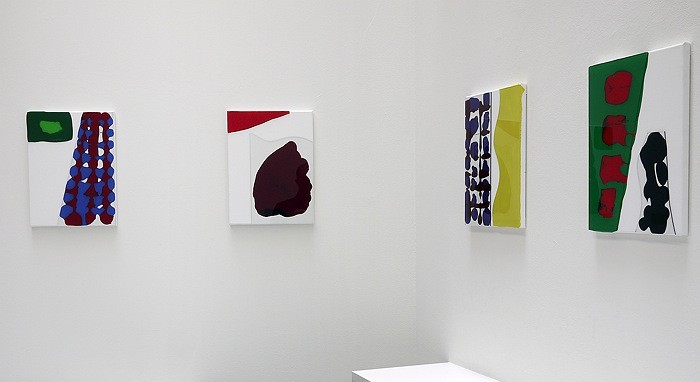 We are pleased to announce our next exhibition of Christoph Rütimann‘s Venice in a Boat – Zürich as well as his latest works. Rütimann, based in the Canton of Thurgau, is one of the most important Swiss artists of his generation. His work is regularly presented at home and abroad, notably his exhibition in 2008 at the Kunstmuseum Bonn, which had previously been on view at the art museums in St. Gallen and Thurgau.
The artist has been represented by Galerie Mai 36 since its inception.

Christoph Rütimann‘s wide-ranging oeuvre includes performance, word and sound installations, photographs and videos as well as drawing, painting, and sculpture. He explores the fundamental parameters of whatever medium he chooses to work with. Despite the diversity in means of artistic expression, unmistakable constants can be made out in this oeuvre: in addition to studies in line and color, Rütimann works with chance and gravitation and, in fact, with scientific knowledge in general. Investigation of the line as a basic formal element figures prominently in his drawings. Its potential is further developed in an extraordinary series of video works, the so-called Handläufe and Geh-Länder, in which he challenges our perception of places and their topography by propelling his camera along the tops of railings. The artist also repeatedly investigates the potential of painting as a place and vehicle of colour.

A boat from Lake Zürich has been moved into the gallery's largest space, with a monitor showing a camera ride through Venice inserted in a slot cut into the gunwale. The camera seems to pierce the screen and we approach a vanishing point that keeps receding into the distance. The video camera, mounted on four little rollers and propelled by an engine, loudly rattles through the canals of Venice and through Mestre along the railings and sterns of boats, on the walls of houses and along piers. Since the boat is tipped to one side, the horizon is inclined and the surface of the water slants towards the perpendicular. Watching the film almost makes one seasick. By moving Venice into gallery venues, Rütimann goes into reverse as it were. Zürich is the fourth and last city where he has laden Venice into a boat. In a joint installation at Kunsthaus Zug next year, the artist will present all four boats – from Lucerne, Berlin, Geneva and Zürich – each with their own films. In addition to a camera ride through San Michele Cemetery taken from a low angle, the presentation includes a video in the window of the gallery that catapults viewers at breakneck speed up and down the entire construction site of the Prime Tower in Zürich. During the wild, roller-coaster ride, viewers recognize bits of scaffolding, formwork, ducts and gigantic window elements. No one is likely to have ever toured a construction site in this way.

Rütimann has wallpapered the dark and light walls of the entrance to the gallery with words that repeat themselves at regular intervals and can be read in all directions. Colourful behind-glass paintings and Waschsalon pictures are mounted in the gallery. Collage-like masses of pressed paper, produced by washing art books in a washing machine, have been placed between two panes of glass. This ruthless and yet symbolic process is not only a means of thinking about the history of painting but, above all, a form of liberation.