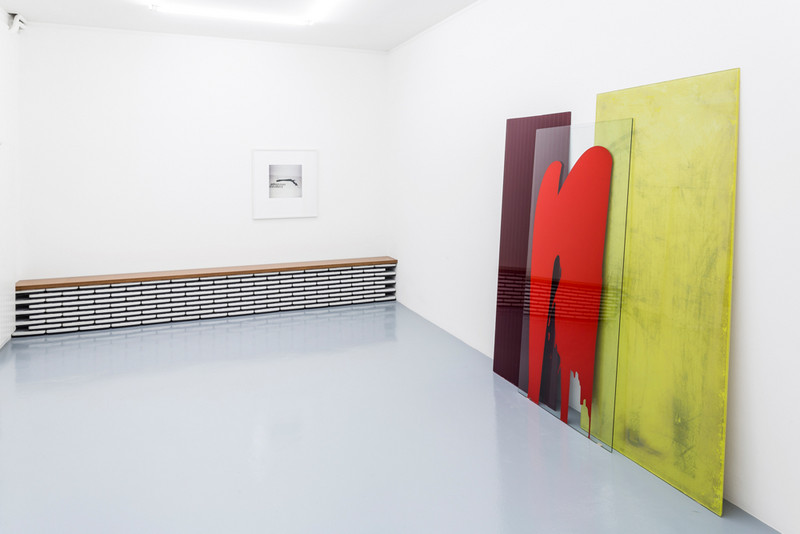 Christoph Rütimann was born in Zurich in 1955 and studied at the Lucerne School of Art and Design from 1976 to 1980. Today he lives and works in Müllheim (TG). His works are exhibited regularly in Switzerland and internationally, most recently in Prague and Schaffhausen. In 1993 Rütimann represented Switzerland at the Venice Biennale. In 2012 the Kunsthaus Zug devoted a solo-exhibition to him; in 2007/08 the Kunstmuseum St. Gallen, the Kunstmuseum Thurgau and the Kunstmuseum Bonn organised a large-scale exhibition of Rütimann’s works. Since it opened, the Mai 36 Galerie has represented Christoph Rütimann. We are now delighted to be presenting a survey exhibition of his multifaceted oeuvre, featuring works from three decades and in the most varied of media.

Most of Rütimann’s works involve a moment of reversion or even inversion. Small photographs of small objects are presented large-scale, the lines in his drawings do not so much delimit as give direction, suggesting courses and indicating rhythms; they are notations of a dynamic process rather than drawings of anything familiar.

Rütimann’s video works also follow a path of their own, tending to show directions and stretches. The camera travels along handrails and edges thus literally making these, as lines, the actual pictorial subject: a given line that always points forwards. Place becomes a pretext for a continued directional movement. Movement and direction are experienced. Places present occasions of artistic praxis. Rütimann’s willful way of seeing such places as London and Venice uses familiar givens for his own artistic purposes. In the frenzy of the camera tracking shot, the eye attempts to grasp the features of the famous places, to assure itself of them, but is repeatedly drawn on.

Sculptures with weighing-scales represent a work group of their own. As measuring instruments dependent on gravity, they weigh themselves, sometimes as a batch or else in combination, or else they are captured and solidified in plaster and the weight of that plaster.

Christoph Rütimann’s reverse glass paintings face into the space of the image, even more so into the space of the colour, from the back, enabling the colours to appear as material, as mass. They become the bodies of the colours in which viewers, mirrored in the glass, perceive themselves as part of the whole. Art history as manifest in art books undergoes a washing cycle. A mass, or also a pictorial mash, again becomes a product of emancipation from history – as part of his own artistic work, framed and behind glass.

Christoph Rütimann’s artistic approach to the world constitutes a performative measuring of that world. Colour becomes his counterpart, and his tracking shots travel through it along lines that are to be found everywhere. Rütimann’s drawings are also line works that point beyond the edge of the paper and, as a theme passing from one medium to another, find their way into the world of the videos, where they even reflect on the concept of a contemporary painting as they appear on the screen.

The exhibition highlights 30 years of Christoph Rütimann’s artistic praxis, which involves a transgression beyond media and spatial limits that can be immediately sensed by the viewer.
www.mai36.com