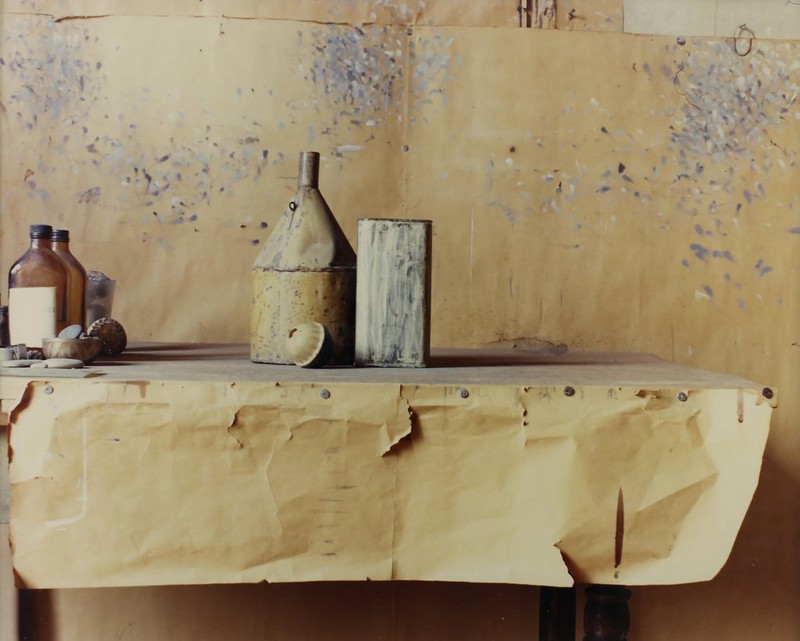 „An atlas is a book, the place where all the signs of the earth, from the natural to the cultural ones, are conventionally represented: mountains, lakes, pyramids, oceans, cities, villages, stars, islands. In this totality of symbols and descriptions, we locate the place where we live, and where we would like to go, the route to follow. (Luigi Ghirri, 1973) 1
For his series Atlante (1973) Luigi Ghirri photographed details from maps he found in atlases. The Italian photographer (1943–1992) understood this project to be an imaginary journey through an abstract cartographic depiction of the world. To a certain extent both reality and maps with their signs and symbols are congruent to him. “[The] formulation of the problem is shifted from that of signifying to that of imagination.” 2
Thus, for Ghirri imagination replaces an actual journey, his photographic details of maps of the earth and its oceans as well as of star constellations, become some kind of photographic logbook. In a poetic and subtle way he draws attention to the degree of abstraction captured by the (photographic) images.

In Ghirri’s second exhibition we will be exhibiting an extract from his Atlante project, together with a selection of vintage photographs made between the late 1970s and 1990.The exhibition allows an insight into a multilayered and influential body of work, that William Eggleston described as follows: „I am extremely drawn to the minimal and more sublime aspects of Ghirri’s work, as well as those images that are more confounding – those in which you don’t know exactly what you are looking at, in which he is gently teasing the viewer about what is real and what is not.” 3
Since the early 1970s when Ghirri started to photograph his home region Emilia, in Northern Italy, his work has since developed a fascination for the everyday and seemingly marginal things. Seeing for him was a way of thinking, and thus his photos are always an attempt to look behind the objects he was photographing in order to perceive their being and their beauty. On a more existential level his visually guided thinking always meant an interest in the relationship between the micro- and macrocosm. He wrote in 1978: „I am committed to seeing with clarity, which is why I am interested in all possible functions, without distinction, taking them as a whole and seeing and making recognizable the hieroglyphs encountered on each given occasion.“ 4

With a precise eye he selected single objects or arrangements of things at thrift stores or flea markets for his series Still Life. These images on the one hand have a documentary aspect. By directing his attention to them and choosing to frame the objects Ghirri enters them into an internal narration. These objects are evidence of the past, but in that very moment when photographed they seem anew, they begin a new dialogue with one another; especially his photographs that are images of images (e.g. when he photographed photographs, paintings or mirrors), which highlights the playful yet precise nature to which Ghirri questions the image and what it can reveal.
He wrote: „The sense I try to give to my work is that of verifying how it is still possible to desire and face the path of knowledge in order to finally distinguish the precise identity of human beings, of things, of life from the image of human beings, things and life.“ 5

Objects that tell a story even when humans are absent, are important for two series of work that Ghirri simultaneously worked on: Atelier Morandi and Studio Aldo Rossi (1989–90). In both series Ghirri took photos of workspaces, in Giorgio Morandi’s case it was the painter’s studio in Bologna, in which everything was left virtually untouched after Morandi’s death in 1964. The jugs and other containers that are so well known in Morandi’s painting appear on the photos, as well as other traces and marks left by the painter.
Though they are completely still, the easels, jars of paint and brushes; as well as marks of paint on papers, seem to make visible the process of painting itself. By doing so Ghirri’s photographs are a reflection on the relation of absence and presence, of painting and photography and again on the nature of images.

Besides the love for objects, architecture and landscape were other important subjects of Ghirri’s work. His series Paessaggio Italiano, forms a collection of images, which reveals the artists own visual topography of Italy; in another series In Scala (In Scale) Ghirri took photos of a park in Rimini, where miniature models of famous Italian monuments are installed. You can see the Colosseum, the Milanese Dome and even the Dolomite mountains. Similar to Atlante these photographic journeys put into question our view on this world.