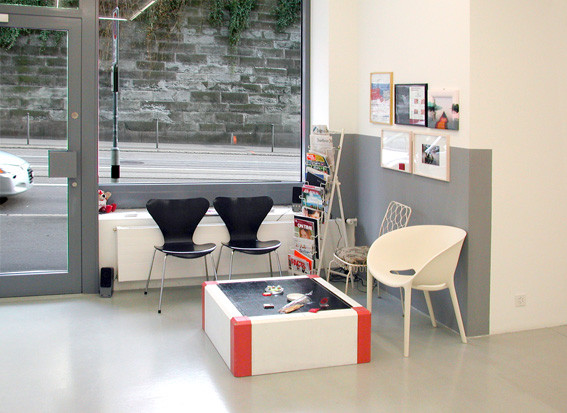 We have great pleasure in presenting new works by the German artist Manfred Pernice (*1963 in Hildesheim, lives and works in Berlin) at our upcoming exhibition. Ever since his brilliant appearance at the Berlin Biennale in 1998 with a main or central can that referred to Tatlin and Speer, Pernice has been regularly represented in international exhibitions, for example at the manifesta and the Zurich Kunsthalle in 2000, at the documenta in 2002, at the Biennale in Venice in 2003, and recently in the Museum of Modern Art, New York, in “Drawing from the Modern, 1975-2005”.
Now, with "Zweite Hand", Manfred Pernice is exhibiting some sculptural works on the premises of the Mai 36 Galerie – works concerned with conventional ideas of abstract sculpture, its presentation modi and its contemporary counterparts. As a contrast to his well-known objects, with which he likes to undermine the traditional concepts of dealing with art, he formulates here projections of sculpture that can also be read as serious proposals, as well as "sculptural no-go areas (for example Henry Moore, Bernhard Heiliger and Wieland Forster) that no longer exist in this way" (Manfred Pernice). Thus they are reminiscent of, for example, works by the Austrian sculptor Fritz Wotruba (1907 – 1975), who after 1945 abandoned figurative components in favour of geometrical abstraction with the cube as the basic form. The manner of the works exhibited here evokes an image of a sculpture exhibition while at the same time presenting the exhibition as a staging of an exhibition. The individual sculptural works include ideas about sculptures. In fact, it is difficult to describe Manfred Pernice's works as sculptures, in as much as although they can sometimes be interpreted as autonomous sculptures, at other times they are more like furniture or architectural models, whose possible functions elude every attempt at assigning them a purpose. We have only to think of his well-known pillar-like plywood sculptures, which represent an ironic commentary on our world, cluttered up by banal architecture and "encanned" – a dictum that he is fond of using.
On the basis of drawings in which Pernice sketches three-dimensional objects, he either makes hand-sized models from folded and glued cardboard, or creates voluminous sculpted works from wood or pressed chipboards. He uses these to allude to standardised forms customary in contemporary architecture and the furniture industry. They thus evoke associations with high-rise buildings, canals and containers, at the same time representing interior landscapes.
At times, the images are coloured or have photos, sketches, cropped sections from advertisement and newspaper cuttings stuck onto them, thus alluding to historic events or literary figures. The historical impression is enhanced by the fact that they are reminiscent of second hand objects that are temporary and fragmentary, familiar and alien at one and the same time, condensed into poetic metaphors for the inconsistencies of modern urban life.
Manfred Pernice is having his second exhibition at Mai 36 Galerie.
The vernissage is on Thursday, 8 March from 6 to 8 p.m. You are cordially invited to a personal meeting with the artist. Also, we will gladly send you relevant picture material on request.
We appreciate your interest, and we look forward to welcoming you to our gallery.
Mai 36 Galerie
www.mai36.com