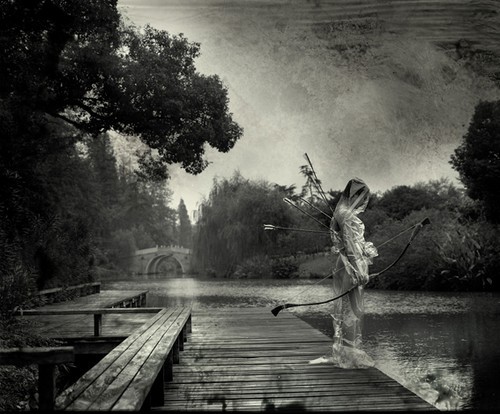 Tie Ying's photography work is arresting. Not solely due to its obvious implications of political criticism and irony, which mocks the malaise of ! chinese society of the past and the present, but the instant impact of the mass media appropriated image stills add on the immediacy and emergency of the work itself.

The beautified and romantisied violence of the actual tragic historical events amplfies and ripples his work. It inevitably makes one ponder, wonder and surrender, eventually.

The work 'blooming in a riot of colours' is a metaphor on human thought - life and death. It is a quote from the well known 1956 mao's slogan 'blooming in a riot of colours, let a hundred schools of thought strive'. Mao wanted to encourage the intellectuals to express themselves freely. This was soon followed by a struggle against rightist deviation. over half a million intellectuals were convicted as 'rightists'.

'blooming in a riot of colours, let a hundred schools of thought strive' the cultural slogan is in a sense still used and interpreted by every successive team of the ccp leadership.

Meng Jin explores the interaction between public and personal space, the lost memory and the re-found souvenir, the haves and have-nots, and the hidden agenda in the light versus the unspoken words in the dark.

Meng jin's work entails the struggle one faces daily in coping with one's personal and limited space and time against the vast and rather unknwon and unpredictable world. The feelings and delicacy are left between the two to be desired, constantly.

Maleonn's world of photography is a stage, where the artist experiments through self re-inventing by portraying his fantasy, fear and memory.

His series 'chinese stories'! probably illustrates best the essence of his oevres. It's a legendary tale about a six century military strategist. How he employed a smart tactic in sending ships of navy troops to attack their enemy at night, unexpectedly by surprise. In return, the troops came back to camp with their most lacking and desperately needed weapons - the arrows, which were smartly 'borrowed' from their own enemy and later were used against the same people.

Maleonn re-examines the legendary tale by poking the essence of meaning of self and foe, fiction and reality.

I am proud to present, curate and house the works of three talented and arresting chinese artists in the serene environment of Mai 36 Galerie's showroom on Raemistrasse 35 in Zurich.

I look forward to welcoming you to the exhibition and thank you for your interest.