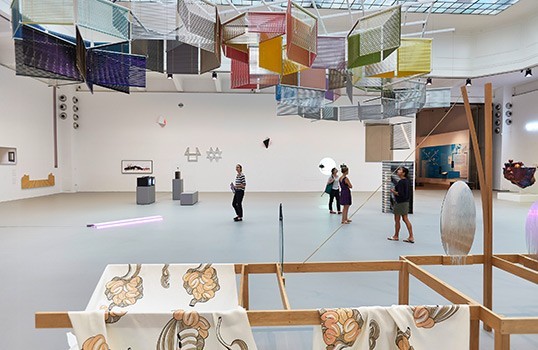 An exhibition by the MAK as part of Future Light

There is a widespread belief today that light will do away with ignorance, the abuse of power, and inequality. This trust in light is not unlike how “enlightening” operated during the old Enlightenment in the 17th and 18th centuries, shedding light on dark corners and getting rid of unawareness, mysticism, and other unruly phenomena. In both cases it is a penetrating light that creates transparency and visibility. Today it is put in practice as the light of surveillance, communication, and speculation. Transparency has even gone a few steps further nowadays and has come to be seen as a guarantor of many things, including accountability and trust, and by extension the free market and the stability of the capitalist system itself. The scholar Clare Birchall calls this “the contemporary transparency assemblage.” She argues that today transparency, through “the fervour for light,” has even become a pan-ideological democratic value that no one can afford to question. Thus, at the same time as “being transparent” remains important in any democratic context—we have the right to know a lot of things—it has taken on some characteristics of a dogma.

At the same time, light that creates reflections, abstraction, opacity, and shadow abounds in contemporary art. Some of it has migrated into Escaping Transparency in the expansive exhibition space at the MAK. This light is non-transparent, it is refracted and operates obliquely. It is relational light, a sort of trickster light, it is light that goes on and off. It is light as a carrier of commercial messages but also more obscure indications as to when and how something is visible and not. It is the light of reflection and endless reproduction in a condition where beingvisible is considered equal to being or to existing at all.

Perhaps Birchall is right when he says that each era gets the transparency it deserves. It is unclear what that will mean when, in the future, life is more likely to occur on planets with two small suns creating a saturated photosynthesis that makes vegetation black. For now it might be the moment to exchange the “right to privacy” for “the right to opacity.” We remember Eduard Glissant’s powerful call for the latter, which arose from colonial subjects’ refusal to be totally knowable and therefore able to be controlled by the colonizers. Here opacity is not the same as obscurity but simply that which cannot be reduced and contained.