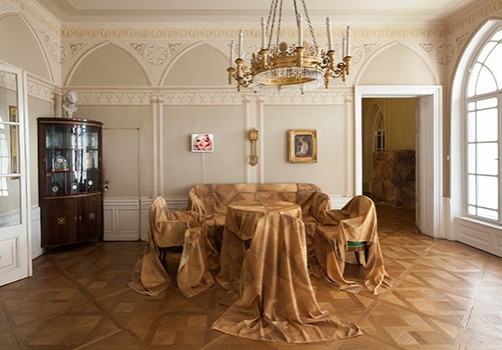 Before the backdrop of this venue’s changeful history leading all the way up to its present-day use as a museum branch, the MAK DESIGN SALON sets the stage for a dialog that encompasses multiple eras in order to highlight thematic relationships between past and present while also opening up new perspectives. The catalysts are provided by design interventions that temporarily transform this uniquely furnished Biedermeier and Empire-style atmosphere of study into a laboratory of the new. The interventions undertaken thus far, by London-based Cypriot Michael Anastassiades (Time and Again, 2012) and Italy’s Studio Formafantasma (The Stranger Within, 2013), have given rise to new contexts within which to encounter both the historical and the contemporary objects, which have to assert themselves differently at the Geymüllerschlössel than they would in a typical “white cube.”

This year’s contribution Back in 5 min by Paris-based designer Robert Stadler plays on the easy transformability of the Biedermeier interior by means of light pieces of furniture, which—depending on the situation at hand—can be grouped into functional islands to permit uses such as eating, reading or music-making in one and the same room. In doing so, Stadler reinterprets the simple furniture typologies of traditional rustic rooms—as suggested by this former rural summer villa—to create object groups consisting of “working furniture” such as stools and benches that contrast with this villa’s fundamentally bourgeois and opulent leisure idyll. This includes using surfaces and patterns in keeping with the Biedermeier-era material and decorative approach. In the process, deconstructive mechanisms give rise to a type of in-between phenomenon—as if the space had just reconfigured itself.

Subtle spatial effects and the shifting of quotations are defining elements in Stadler’s oeuvre, which extends over multiple artistic fields—whether as a performance for the Centre Pompidou (Tephra formations play, 2013) or as façade and urban furniture designs for the Ensemble Poirel in Nancy (Traits d’union, 2013). Stadler has also given Michael Thonet’s Chair No. 14 (Thonet Brothers, 1859, reissued as Modell No. 214) an alter ego (Chair 107, 2011). In his projects, Stadler—who was recently awarded the French Prix Liliane Bettencourt Pour l’Intelligence de la Main—goes beyond the categories of art, artisanship, and design to take up a tradition from his Viennese roots, to which he pays an artistic visit at the MAK DESIGN SALON with Back in 5 min following a long absence that has included stops in Milan, Paris, and Rio de Janeiro.
www.mak.at