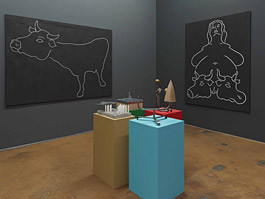 Aldo Walker who would have celebrated his 75th birthday this year, is one of the great Swiss conceptual artists, and one whose significance has not yet been fully appreciated. His œuvre was essentially divided into two maingroups: object-like experimental arrangements called logotyp, and figurative line pictures called pictograms. Today, impressively autonomous in their conception, expression and execution, these are among the undiscovered high points of 1970s and 1980s international art.


From the very outset Walker examined how the work and the viewer influence once another in a visual process of perception. For example, his early object Tisch 2 (‘Table 2’, 1965, Museum of Art Lucerne) consists of a table with a mattress that is pulled over the table top like a condom and is also bulging. Taking his cue from Duchamp’s Bicycle Wheel, Walker could be said to have linked an object from the culture of eating (a table) to an object from the culture of sleeping (a mattress), filling it with stuffing and so producing a metaphorical representation of gluttony. But the table could also be said to function as a mattress, a pillow, a bed and hence to symbolise sleep or its corollary — sex. The bloated appearance of the object suggests physical, animal urges .... Walker’s early works are essentially simple, metaphorical experimental arrangements taken from real life. In AW(1970, destroyed), for instance, he ‘hangs’ his initials on the wall, using electric wire heated up to his body temperature. The work is first of all a direct reference to him; it questions the author (who originally worked as an electrician) with the initials AW. But if we enter this process from the outside, it automatically becomes an issue between the work and the viewer. The letters AW, even though they are the artist’s initials, may also stand for thousands of other people (and things). In this way a biographical note becomes a work and, as a work, a generally available sign or symbol for existence. This markedly cerebral approach to art was radicalised by Walker in the early 1970s when he set out to eliminate traditional metaphorical patterns of relationship between the individual elements of his work and design his experimental arrangements so that it was up to the viewer to decide what their content might be. Among the initial high points, in 1975, were his logotyp. Logotyp, ‘as I understand them, have no meaning in themselves; they only create a meaning with, and through, the viewer.’

The best-known of the 25 logotyp is Logotyp VII (1976, Aargauer Kunsthaus collection). What we initially see is a dog, sawn or stamped from a piece of wood. According to Walker, it is a stylised fox terrier ‘sitting up and begging’ in front of a food bowl made of iron. Because of this familiar ‘literary’ scene, the object makes an immediate visual impression on us as viewers. We can communicate with it directly, for we think we know what we are seeing. But as soon as we engage in this dialogue, we are also confronted with the strange iron framework in which the wooden dog is confined. One of the metal tubes actually passes through its body, so that there is only way it can move: an up-and-down sliding motion that is quite absurd for a dog sitting up and begging. As viewers, we involuntarily begin to bring metaphorical elements into play. And so the framework, which prevents the dog from reaching the empty food bowl, could also be read as a sadistic gesture. Why should the fox terrier care about an empty food bowl? And why is the bowl made of heavy, cold iron rather than pottery or plastic....? Finally, around 1981, Aldo Walker again radicalised the path he had taken by paradoxically harking back to the ‘classic’ panel painting and starting to draw lines on canvases primed in a single colour, but without painting. The point here is not just whether Walker’s panel paintings are paintings or drawings, intermolecular pictograms or brush-drawn line pictures, but also his effort to trigger a cerebral process of perception through a signal-like craft activity, meanwhile exposing meaning as a perpetual construct of our own imaginations. The works by Walker are one great school of thought where we can learn how to read and are able to read with the eye and the mind, beyond traditional conventions, as a major aesthetic experience and an epistemological, practical adventure.