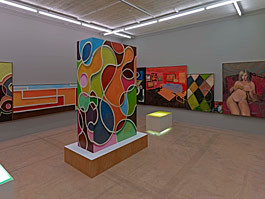 Anton Henning’s work frequently refers to art history, which he takes very seriously and yet approaches with light-hearted irony. His artistic world is a subversive one in which painting, even though the main topic of his work, is not its sole medium, for it coexists with sculpture, furniture and video.

His painting has a wide range of sources, borrowing from artists as diverse as Courbet, Picasso, Picabia or Arp, to name just a few. All the established painting genres, such as nudes, landscapes, portraits or still lifes, are usually approached in an absurd, grotesque manner. Although Henning does not actually disguise his sources, what he is really doing is interpreting them rather than borrowing directly from them. Each of his paintings is a new work which he treats as reminiscence or subjective commentary, and to which he often adds autobiographical details. His work reflects a wish to view art history in an unconventional way, as a means of incorporating various registers of painting. To Henning, this apparent eclecticism in both style and subject is an expression of his total artistic freedom — an attitude that enables him to develop a wide variety of formal idioms, thereby blurring the identity of the source. At first glance it seems hard to make the connection between a naturalistic landscape painting and a grotesque portrait, or abstract compositions which are often entitled ‘Intérieur’ and may have a simple geometric structure or, on the contrary, be full of arabesques. On the one hand, the artist seems to want to come to terms with the notion of beauty, in other words a kind of ‘good taste’; on the other, he appears to delight in developing a campy style. Defined in Susan Sontag’s famous essay Notes on Camp (1964), camp is reflected in Henning’s work not only as a predilection for exaggeration and special effects, but also as a tendency to foster bad taste or an ironic worship of kitsch. His titles also seem intended to disconcert viewers rather than help them understand the work. The aforementioned title, Intérieur, may refer to a living room with a couch, a coffee table and pictures on the walls, or may stand for various abstract compositions. A Portrait may indeed turn out to be a self-portrait, but it could just as easily be a Marcel Breuer chair. This deliberately confusing approach may be a way to keep viewers alert and give them an active role in interpreting the artist’s work. The multiplicity of styles and treatments in Henning’s painting is echoed in his approach to sculpture, furniture and video. This wish to be an all-round artist can also be seen in the way he arranges his works in space. He therefore treats installations as a true medium in which he acts as curator of his own exhibitions; these become settings not only for his works, but also for the viewer. Henning thus ‘stages’ his work with a combination of very different genres and sometimes conflicting aesthetics. His installations thus depend on finding a particular tone that will maintain cohesion between the various works. They are also designed as the ideal context for contemplating his works, in which all the elements are interconnected and the viewer becomes part of the installation. The artist thus creates settings that enable him take his viewers into a sphere which depends on experience rather than knowledge, and which, by virtue of its mobility, always creates an unusual situation — a Gesamtkunstwerk.

Anton Henning was born in Berlin in 1964, and now lives in Manker.