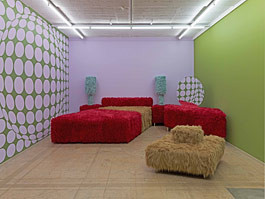 Whether it be a familiar room where dreams and inti- mate secrets can be projected or a ceremonial one like the famous Stanze that were decorated by Raphael in the Palace of the Vatican, the bedroom creates a special rela- tionship between the work of art and the viewer, forcing them into physical proximity in an everyday setting. Like a room of one’s own, each of the “bedrooms” in the Magasin des Panoramas is filled with an artist’s world, with works that are part of the museum collection.

In the museum setting, the bedroom, which is packed with information, forms a deliberate contrast to the White Cube, which cuts off the works from any potentially distracting context. And, because of this wealth of meaning, it is a room that many of the artists exhibited at Mamco, from Siah Armajani and Maria Nordman to Sarkis and G érard Collin-Thiébaut, approach. The rooms in Ghislain Mollet-Viéville’s L’Appartement (‘The Apartment’, permanently displayed on the third floor) are both public and private. In Paris’ Rue du Renard, the art agent was exposed to his visitors’ gaze; just like the artists he promoted, he too was on show. Echoing this, the Yoon Ja and Paul Devautour collection is a comfortable studio apartment full of heteronymous works of art that only become truly meaningful when arranged, as in Un cabinet d’amateurs, where the museum first displayed it. Tomás Espina and Martin Cordiano’s Dominio also shows a room that is arranged as a living space, but is devoid of human presence and, above all, hints at some unknown disaster whose scars are all that now remain for visitors to see. Only an audible memento of the catastrophe is left to trigger the imagination. The room is no longer a space in which works are displayed – it is a work in its own right. And when a painting such as the one by Nina Childress is installed there, the work becomes a room. Painting is first nature to her, and so it is perfectly natural that her Grande Chambre verte (“Big Green Room”) has an echo in the history of painting. In 1907, after paintng Kammerspiele (“chamber theatre”) scenery in Berlin, Edvard Munch (1863-1944) embarked on his series of paintings based on The green room, in which perspective and out-of-frame elements were organised so as to make the viewer part of the picture. Childress’s method is different. Opposite the small black mirror in her painting, large mirrors again bring the visitor and the canvas together as a single image and space.

Sylvie Fleury’s Bedroom Ensemble creates a more explicit link with art history by reinterpreting a Claes Oldenburg installation. Starting in 1963, the American artist recreated hotel bedrooms he remembered staying in. With its fake exotic animal fur, fake marble and false perspectives, his Bedroom Ensemble poked fun at the saccharine strangeness and artificial comfort of these places of transient intimacy. Fleury floods the room with her own vocabulary of texture and colour, taking Oldenburg’s idea to its extreme. In contrast to this unreal warmth, George Segal’s Motel Room presents a silent narrative in which we glimpse the violence and distress of the human drama. His plaster characters set in a real environment shift the register of emotions towards the artistic sphere.

As for the unoccupied, impersonal bedroom in Alain Bublex’s Quoddy Motor-Inn, it is depressingly dreary, with just the thinnest veneer of quaintness. This typically North American small-town motel bedroom is a collection of platitudes. But the Quoddy-Motor Inn will never welcome tourists from Glooscap, the city of three million people in New Brunswick that Bublex invented together with Milen Milenovich from 1985 onwards. For maximum realism, the artist gave his city a history and a number of celebrities (such as the writer Félicien Marboeuf), and in particular he documented its topography and layout in precise detail, even publishing postcards with photographs of its streets.

Finally, Amy O’Neill’s Pilgrim Boudoir also pays ambiguous tribute to American vernacular culture by reproducing furniture that Raymond Overholzer designed for the “Shrine of Pine”, his hunting lodge where no-one ever stayed. The link between bedrooms and dreams is reversed, the former now
reflecting the pursuit of the latter.