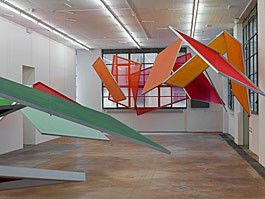 Since the late 1980s, Cécile Bart has been producing paintings that she calls peintures/écrans, or paintings/screens. A quick reading of the works might lead one to see only abstract monochromes there, except for the fact that the translucent aspect of the surfaces and their arrangement in space undermine that interpretation, suggesting other modalities and temporalities to the eye. Viewers are free to move around in a “multidirectional environment”, fascinated by a place teeming with visual information.

Suspens at Geneva returns to the Suspens show that was held at Frac Bourgogne in Dijon over the summer of 2009, although this latest version both alters and expands on the original exhibition. The thirty-one elements that now make up the series are alkyd paintings on “Plein Jour” terylene, the same synthetic fiber used in the curtains that filter the light streaming through our windows while shielding us from the indiscreet eyes of others. The look of Bart’s paintings/screens is the result of two distinct, succeeding gestures. First, the paint, which is fairly diluted, is applied in quick, irregular brushstrokes to a terylene support stretched over a frame, then the color is wiped away. The minute spaces in the weave, blocked by several passes of the brush, are freed of the surplus pigment in a gesture that restores the transparency, if unevenly, to the fabric which had been tinted with a denser color earlier. While a hint of the brush’s light contact persists in spots, at the end of the process, paint and the fabric support merge. Strung from thin metal cable, the pieces seem to levitate, forming diaphanous screens that the eye encounters and looks right through; they are surfaces sensitive to variations in the light that mask nothing of what they are hanging in front of. As if struck by a kind of double vision, viewers move about in a polymorphous, multicolor environment that they activate themselves. In this theater, the paintings/screens create the setting, which is altered by the viewer’s every move. Hanging down or balanced in place, the paintings/screens are freed from both the wall and the conventional straight-on view of pictures. Some viewers are sure to recall their precursors, the exhibitions of the Russian Suprematists, Lissitzki’s Proun Room, or the abstract room in the Art of This Century Gallery in New York (1942).

The exhibition adheres to a partition that was elaborated in the artist’s studio with the help of a scale model of Mamco’s Sculpture Plateau. Bart has composed a kind of visual ballet in three movements. Featuring warm colors, the first movement, “Les Volants” (The Flying Ones), dances an arresting pas de deux with the windows of the Plateau. The second movement, “Les Nageurs” (The Swimmers), in blue and green tones, conjures up a waterline. Finally the third movement, “Les Acrobates” (The Acrobats), an alternating array of shadows and light, plays a subtle game with the floor of the space. The works flirt with the gallery’s walls without touching them, and surprise the eye with the juxtapositions and listing, teetering arrangements of the various colored pictorial planes. The display is total, the work dances throughout the whole of the space. Visitors’ movements around the venue animate this motionless choreography. They can remain on the edge of the installation, contemplating the floating screens, which play with the large windows of the Sculpture Plateau. Or they can choose to immerse themselves in the display and discover the focal points and the teeming number of perspectives.

What makes an image in Bart’s works is the dual function the paintings/screens fulfill. They are simultaneously cameras, displaying what they frame and recording, but without setting anything down permanently, the complete range of fleeting variations that affect the screens’ surfaces: the variations of light, the visitors’ movements, and so on. But they are also surfaces for projections that are haunted by the memory of beloved paintings, like the detail from Matisse’s 1947 canvas Le Silence habité des Maisons (The Inhabited Silence of the House), projected on terylene and, for Bart, transformed into both a source image and an experience of the fusing of image and support through projection. The shadows cast by the paintings/screens are also an integral part of this display, where the way in which the pieces are hung constitutes the work strictly speaking. Viewers familiar with art history may recall here the hand-drawn shadows of certain ready-mades that Marcel Duchamp placed in his final painting, Tu m’.

Cécile Bart was born in 1958 in Dijon; she lives and works in Marsannay-la-Côte (France).
www.mamco.ch