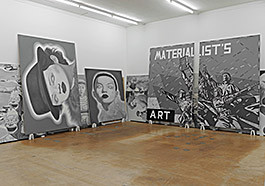 Originally from the Naples area but now based in Milan, the painter Gabriele Di Matteo has exhibited at Mamco many times, and one of his small paintings is on permanent display on a staircase at the museum. The exhibition China made in Italy is a new exploration of the production processes he regularly uses, often involving repetition, delegation and a choice of motifs that are very often deceptive.

Produced in 2009, the series of paintings shown at Mamco this summer consists of some sixty canvases that may either be classically hung on a wall or else left lying on the ground, resting on a picture rail. Visitors to the exhibition thus get the feeling they are in the artist’s studio, or rather in a factory full of pictures that are stored there until they can be sent elsewhere—very much in keeping with the spirit of Gabriele Di Matteo’s work, for he is basically an image maker. In producing these paintings he has once again turned to a Neapolitan painter who specialises in certain kinds of motif (such as flowers or the sea) and then processes them systematically and mass-produces them for the general public, especially tourists. In short, Di Matteo has had the paintings made by a practically unknown painter who normally turns out entire series of images devoid of serious artistic pretentions. These are genuinely hand-painted each time, in large numbers. In terms of their execution, they thus reflect a view of the artist that has been fully developed by Modernists and such present-day artists as Warhol, Manzoni, Angela Bulloch, as an incarnation or instigator of a painting machine, even if their aesthetics ignore Modernism and its history. As their titles make clear, they are reproductions of paintings by contemporary Chinese painters, paintings that can be seen as photographs in art catalogues or journals (the word ‘after’ in the titles recalls its use by Sherrie Levine to describe her own copies of major works of Western Modernism). A total of fifteen artists have been picked for this series, based on a selection of four or five specimens of their work, according to a specific criterion: they are the Chinese painters who are currently most successful on the art market (such as Yue Minjun, Shi Xinning and Zhao Bo). Rather than an aesthetic approach, this is a sober assessment of commercial value as a driving factor in the production of images. The often large paintings are all black, white or grey, unlike almost all the originals, which are mainly in garish colours. This allows Di Matteo to give the series a visual uniformity beyond the pronounced difference in the motifs, and to appropriate the originals (this grey-tinted world recalls The Blind Man, a series of paintings by the artist that are part of the Mamco collection). The copies may include slight, even tiny variations, for the issue here is the possibility of perfect reproduction, of absolute repetition, on the understanding that the difference between the original and the copy of it is unbridgeable. And if every painting is unique, this is because the hand that paints, regardless of its skill, is always a hand that invents, and produces variations. There is a great deal of freedom and irony in China made in Italy: whereas old Europe is in the throes of an economic crisis that is partly due to the relocation of its industrial production to China, Di Matteo has relocated the production of Chinese painting to Naples; whereas the originals are made by the new stars of the globalised art market, the copies are the work of an almost unknown image-maker from a local market; whereas the originals often celebrate a joyful, charming, almost carefree use of colour, their Western version is visually attenuated, and incomparably more serious. And whereas Mamco usually collects what is supposedly art, great art, Gabriele Di Matteo shows us that this category is as questionable as the strident—and typically Western—celebration of originality.

Gabriele Di Matteo was born in the Italian town of Torre del Greco in 1957, and now lives in Milan.
www.mamco.ch