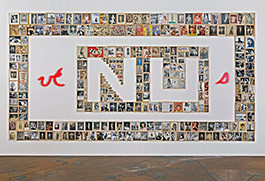 Soulèvements II (’Risings II’, 1951-2013) is not so much a retrospective on the work of Jean-Jacques Lebel as a non-exhaustive overview of more than fifty years of creation reflecting the various directions the artist has taken (collages, happenings, drawings, paintings, installations, assemblages and so on) through a process of exploration of the limits of art and the institutions that exhibit it. The title echoes the retrospective of the artist’s work at La Maison rouge in Paris in autumn 2009, Soulèvements (’Risings’).

Occupying the whole of the second floor at Mamco, the exhibition shows Jean-Jacques Lebel’s first paintings, produced in 1951. This process was marked early on by a wish to break away from the standard framework of art and open up the plastic world to new, radical explorations. Thus, in Venice in 1960, Lebel produced the first European happening L’Enterrement de la Chose (’Burial of the Thing’), the ’Thing’ being a Jean Tinguely sculpture on its way to its final resting place in a procession through the city and along its canals after the work had been killed (the execution of art for art’s sake). Up to 1968 Lebel was to produce numerous happenings around the world (more than seventy of them), and these would be the main facet of his work. But thereafter he decided to abandon happenings, considering them too common in the art world to still be relevant. Soulèvements IIdisplays on a wall (in A3 and A4 size) almost a hundred photographs of these happenings—transient, collective moments that are never lost as such, and seen here through the archives signed and titled by the artist. The images reveal the predominant position of the body and the Dionysian expression of its urges in an artistic practice that the art market cannot cope with. Another stage in this process, Les Avatars de Vénus (’Avatars of Venus’, 2003), is in Lebel’s view one of the key items in the exhibition—images of womanhood projected on four screens that can be seen from both sides within a cube. ’Viewers can walk through it in their own way, while a constantly changing random collage unwinds. What we are seeing is a morphogenesis of Venusian beauty. Each clash of images produces new ’morphs... this isn’t cinema, but painting in motion, “in the process of becoming”’, the artist confides. Here again we see a wish to move beyond artistic categories, turning the viewer into the walker through an installation that is also a walk through the history of the depiction of desire and the female body. Among the most striking works in this vast presentation, the Grand tableau antifasciste collectif (’Great collective antifascist painting’, 1961) by Erró, Camilla Adami, Peter Saul and Jean-Jacques Lebel, which at the time was displayed throughout Europe, illustrates the artist’s political commitment and the collective dimension of his world. Another prominent moment in the process is the maze of images created to mark Soulèvements II: thirty-eight pictures of torture taken from the Internet, printed in colour on strips that one of the sides of the maze, whereas on the walls we can see in black and white the results of the disasters caused by warfare, without the victims being present. Lebel believes art is there to express what is repressed and to display the unbearable—even if that means forcing us out of our moral and intellectual comfort zones.

Deleuze and Guattari’s ideas and procedures regarding the rhizome are clearly at the heart of Lebel’s work : they imply that artistic activity produces proliferating links, juxtapositions, non-hierarchical relationships between beings and things—friendships—which expand everyone’s living space and open up new sides of the subjectivation process, which must constantly be explored. And hence Lebel’s work and life are also marked by companionships (including with André Breton, Marcel Duchamp, Gilles Deleuze, Félix Guattari, Allan Kaprow and Allen Ginsberg) which are an integral part of his artistic world and a way of seeing the artist as a purveyor of forms, ideas, and intensities, an activator of encounters. And thus Soulèvements II, and their rebellious
identities, are a set of juxtapositions and links.

Jean-Jacques Lebel was born in Paris in 1936, and still lives there.
www.mamco.ch