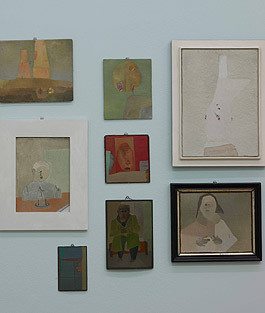 Julius Kaesdorf was born in Hungary, and in 1950 he emigrated to Biberach in Germany, where he made a name for himself as a lawyer and a painter. In 1953 he married Romane Holderried, whose graphic work was presented at Mamco in 2012. Whereas her drawings revealed an impatient creative impulse, her husband’s paintings displayed restraint and concentration. Although the couple discussed the progress of their work, their artistic worlds barely overlapped. The Julius Kaesdorf exhibition, totalling some fifty paintings, covers almost half a century of solitary endeavour.


Although a self-taught artist, Kaesdorf was eclectic. He enjoyed the landscapes of Guardi, Turner, Morandi (some of whose original works he was able to see), Giacometti and Jawlensky; and even though Mondrian’s work often remained beyond his grasp, he appreciated its abstract compositions. He was familiar with Modigliani, Soutine, Renoir, Rousseau and Utrillo, the artists of the Musée de l’Orangerie in Paris. As for sculpture, he liked Greek and Roman statuary and adored the decadence of the Roman Empire, untiringly wandering the Louvre until closing time in order to absorb these works.

Working as a lawyer to keep his father happy and his fam ily alive, Julius Kaesdorf was a weekend painter, and this could have made him a ‘Sunday painter’ but for the ability of his work to catch the visitor’s eye — for instance Joseph Beuys was charmed by the paintings of the man he called the ‘little master’ — no mean compliment coming from him.

Kaesdorf painted what was within range of his eye; it was his wife-to-be Romane Holderried who encouraged him to go ahead and paint whatever he could from his window. His first paintings were stylised, naïve, sensitive. Around 1960, seeking a visual language of his own, he produced geometric compositions into which he inserted figures that gradually became anecdotal in space. What was impressive about his pictures was not their size, or their style, but the ambiguity of his figures – weird faces with blurred, truncated features diluted into the faded fields of their clothes and backgrounds. The features were reduced to weaving lines, coloured squiggles and dots in which the features were hinted at rather than seen. These subtly executed oil portraits were devoid of individualism — almost archetypes.

Like Morandi, Julius Kaesdorf adopted a reduced visual field. His formal world was confined to the study of a small number of motifs. His lean, silent painting was misted over with a subtle interplay of browns, ochres, greys and whites. Over the years his palette of muted tones brightened to the point where figure and background merged in thickly applied outpourings, in which the trace of movements that were no longer restrained can still be detected. Ironically, the public discovered his sombre paintings just as he was developing a predilection for brighter tones. Aside from this change in style, the human figures that had occupied most of his 1960s canvases would make way for large patches of colour that dominated the backgrounds, as the figures diminished in size. Yet Kaesdorf never ceased to be a figurative painter. His canvases were small, and had to be completed in just two days. They remained small even after he retired, for any change would have involved a way of thinking and doing things that was quite alien to him. The paintings he produced during the weekend were put into a satchel and taken to a completely empty room at his lawyer’s office to be assessed after the event.

Julius Kaesdorf was a daydreamer who loved telling stories that were a blend of personal experience and invention. Just like his stories, his pictorial world was full of recurring elements: angels, architecture, landscapes, portraits that flirted with abstraction. His most accomplished canvases were the ones produced after 1990. Figures returned in force, easily filling up the available space. Angels spread their wings before being blown away in a fanciful blur. The angel figures in Kaesdorf’s latest paintings were portraits of saints produced from memory after visiting the Baroque churches of southern Germany. They summed up the artist’s ideas about painting in general, and his own painting, as expressed in a text entitled Damals im Barock (‘In the days of the Baroque’).