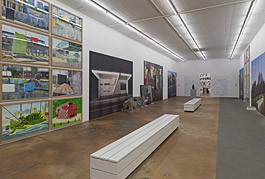 The exhibition Publicly commissioned art on a Paris tram route along the Boulevards des Maréchaux in the east of Paris (from Porte d’Ivry to Porte de La Chapelle) were submitted by Mamco. It covers all these projects, including ones that were eventually rejected. It is a combination of original works, many of them relating directly to the construction sites, sketches, scale models and documentary records. Just like urban space, it offers the visitor a multifaceted route spanning imagination and feasibility, project and reality.

1. Public space — however, and however broadly, the notion may be interpreted — is now largely privatised, mainly by commerce and the advertising on which it relies for its development.

2. In public space, the installation of a contemporary work of art is widely perceived as unnecessary public expenditure that deprives users of more urgent, and above all more useful, investment. Even when it is acknowledged as legitimate, it is felt to be inappropriate.

3. In public space, works of art, even when they are perceived as art, are often considered out of place, eccentric, condescending or downright weird — in other words, as unacceptable privatisation of public space.

4. In public space, contemporary works of art are often not even perceived, let alone acknowledged, as such. Thus, if they are recognised at all, it is not necessarily as works of art, but rather as things with no status, authority or raison d’être — in short, as encumbrances.

6. Whether we like it or not, users of public space are entitled to judge whatever the authorities put there. In advance of this democratic assessment, publicly commissioned art goes through numerous stages of appraisal at which the various parties express views that have little to do with artistic judgement. The main criteria used to appraise works of art in public space are unconnected with their artistic worth. Hence, for both artists and curators, public art commissions are a gruelling assault course full of rejection and disappointment. And yet, for denizens of the art community, this may be their only direct experience of the real world.

7. Having had to deal with all this for many years, I have drawn up a five-point plan which I believe can help tackle some of the main problems associated with publicly commissioned art:

(a) Choose sites according to how strongly they motivate and challenge the artist, then look for an artist who is best able to rise to the challenges and work on the basis of what is revealed by an analysis of the site.
(b) Ask for drawings, don’t hesitate to ask for more, and don’t be afraid to say no, or to look for another artist, unless you are completely convinced. Don’t get trapped in the legal-bureaucratic straitjacket of tenders and competitions.
(c) Give preference to works that do not assume prior knowledge of contemporary art, and hence to ones whose value does not depend on their being thought of as ‘art’.
(d) Avoid works that arrogantly confront the user with their impenetrable authority. But don’t be afraid of works with, say, a sense of humour.
(e) Finally, give preference to works that include an element of practical use. Replace the notion of art in public space with that of art in public use.