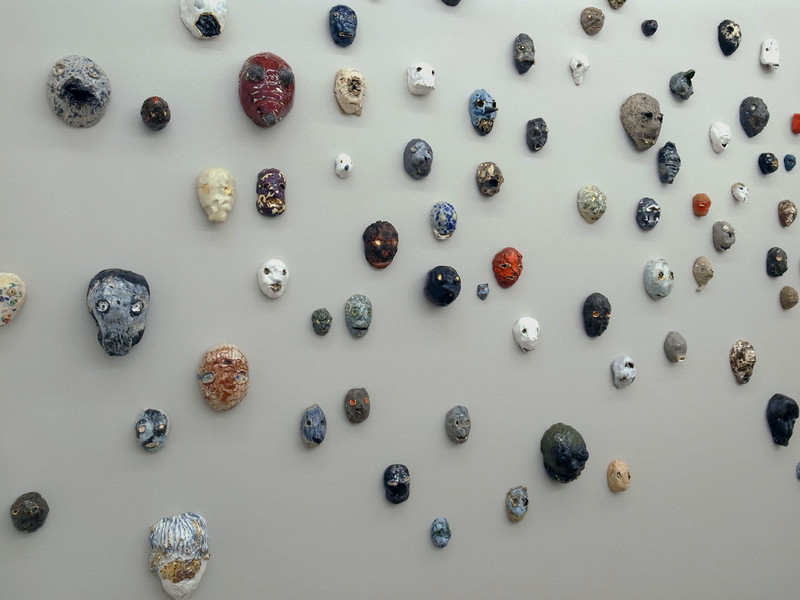 With a varied background that has included a brief period at the Montpellier School of Fine Arts and a course at the City & Guilds of London Art School, plus a spell in the fashion world, Sylvie Auvray has built up a broad range of skills and artistic techniques (including oil on canvas, Indian ink, stoneware, ceramics and faience coated with enamel or glycerophthalic paint) that might lead us to think she is just another well-trained young woman — were it not that, on closer inspection, we are struck by the disturbing strangeness of her familiar-looking figures.

After taking part in a group event to mark the opening of London’s Blue Door Gallery and producing printed fabrics and accessories for fashion designers Gaspard Yurkievich, Sonia Rykiel, Martine Sitbon and Bernhard Willhelm, Auvray has pursued her career as a visual artist whose daily practice brings her into contact with all kinds of new media (her latest venture is moulded concrete). In 2007 she was invited by Delphine Coindet to join the group exhibition ‘Sweet and Extra Dry’ at Lausanne’s Circuit art centre. In what is her first solo show in Switzerland, she now presents her most recent work: masks, sculptures, paintings and drawings.

Unlike ‘ordinary’ masks, Sylvie Auvray’s are not necessarily meant to be worn. They are human, animal or hybrid faces in all kinds of shapes and sizes, with expressions ranging from smiles to grimaces, from terror to compassion. Whether zombies or mummies, colourful, drab, daubed, sallow, toothy, hairless, hirsute, wolfish, equine, ratty, bearlike, avian, reptilian or simian figures, symbolic, fantastic or quite simply wolves, these hollow-eyed surrogate figures conjure up all that is primitive and repressed within us.

Following in their wake, Auvray’s bestioles (‘critters’) are extras in a weird parade, passengers on an ark which, contrary to expectations, has only taken withered, misshapen, monstrous creatures on board, each of them worthy of display in a cabinet of wonders, alongside the ‘natural fantastic’ that is sometimes produced by nature, or more deliberately fantastic curiosities such as ‘boîtes trembleuses’ and mermaid skeletons, made specially for the gullible minds that delight in such wondrous things. Rhino, Phoque (‘Seal’), Gossip, Elephant, Tête de Morse (‘Walrus head’), Singe (‘Monkey’), Emmanuel, Deepo 1 & 2, Raton + Brioche (‘Baby rat + Brioche’), Pepita and Petite tête orange (‘Small orange head’) could just as easily have stood alongside the star-nosed mole whose waving appendages make our skin crawl because they combine to form such a uniquely repulsive figure.

Our shock on first seeing the bestioles gives way to ‘a sympathy without which there can be no relationship between the work and the viewer’, as André Breton wrote in The Magic Art; for these insignificant creatures, hastily produced by empirical rather than well-defined methods, in which chance and experimentation play a far from negligible part, arouse empathy in the viewer. And yet, however touching and droll they may be, these ‘critters’, remote as they are from the reproduction of reality, create a sense of strangeness, and their seemingly innocent familiarity becomes challenging. The artist’s treatment of surfaces — plain and sober despite the pictorial overload of some of her sculptures — prevents her from lapsing into kitsch. There is an intense contact between the bestioles, which appear to be conversing, so that it would come as no surprise to hear them speaking just like the animals in the works of Lewis Carroll — if only because we cannot help but notice their anthropomorphic features.

Auvray’s paintings are a no less striking element in this world of hers. Pied (‘Foot’) is above all comical and incongruous, but Portrait 2 is frankly strange. Its gaze, intensely absorbing that of the viewer, recalls the picture of Dorian Gray, reflecting the darkness that lurks within us. Some of these works, produced at one go in cold, even murky tones, oscillate between dream and nostalgia. With their echoes of childhood, disguise, the American Dream, these are images of a world that can no longer be reached except through the imagination.

Sylvie Auvray was born in Paris in 1974, and now lives there.