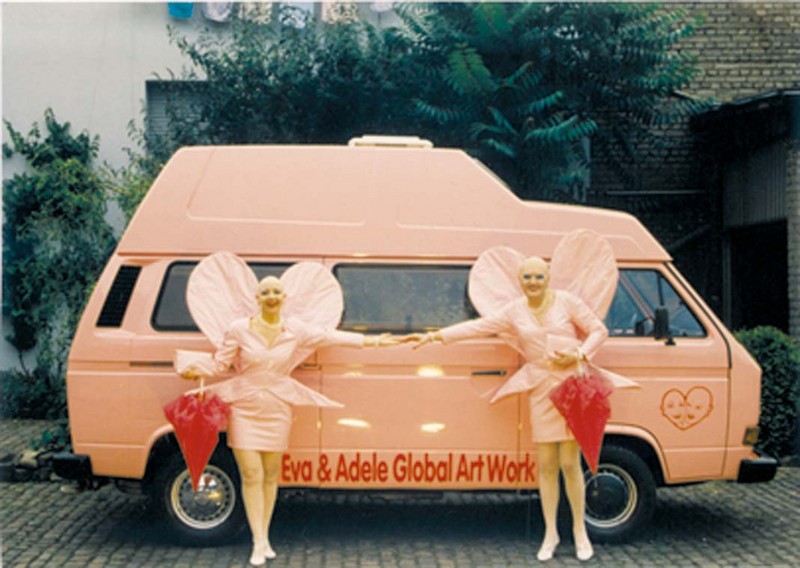 EVA & ADELE, self-proclaimed as The Hermaphrodite (sic) Twins in Art, are an iconically atypical pair of artists on the current art scene. Making no secret of their transgressing of gender boundaries – always identically dressed in an improbably ultra-feminine vein, but with their heads shaven man-style – they are bent on demonstrating that sexual identity is no simple matter. While remaining discreet presences in terms of the art market, for the last 25 years or so EVA & ADELE have been regular features of the gallery openings and other venues they see as "launch pads for their message". Their appearances, each one an "event within the event", offer not radical chic but authentic performances in which every detail has been meticulously prepared and rehearsed.

"Wherever we are is museum" (E&A)
Since for them everything they do is a work of art, EVA & ADELE base their creations on ongoing exchange with their audience and a thoroughgoing symbiosis between art and mass culture and between the public and private domains. Underpinning this modus operandi is a focus on the role of the artist in today's society.

"Coming out of the future" (E&A)
Refusing all references to their past prior to their meeting in 1989, EVA & ADELE describe themselves as having come from the future. Under the logo "FUTURING" they aim to initiate new lifestyles and gender approaches.

The exhibition YOU ARE MY BIGGEST INSPIRATION has its origins in a gift EVA & ADELE made to the Musée d'Art Moderne in 2013: two video installations, two sculptures and a publication.
- Hellas (1989/2001/2007). Involving seven simultaneous video projections, this installation harks back to the artists' very first meeting and retraces their gradual shift towards an ever more closely shared sexual identity.
- Wings I, II and III (1997/98). These videos explore repetition as a form of moving ahead.
- Non rien de rien (1991) and Biographische Skulptur no. 7 (1993/2006). These two autobiographical sculptures incorporate items of personal significance.
- Polaroid Diary (1991/2005) comprises 1500 polaroid self-portraits taken daily by the artists as part of a highly codified ritual preparatory to letting themselves be photographed by other people.

The exhibition is rounded off by a selection of works representative of their output over nearly 25 years, among them the pink camper van (Biographische Skulptur n°2, B-EA 5800, 1999/2006), the first "double" costume (Red Vinyl Costume, 1991) and a number of paintings from the MEDIAPLASTIC series, in which EVA & ADELE investigate the way the media transmit their image.

There will be a performance by the artists at the opening, and at various times throughout the exhibition – notably during the FIAC.