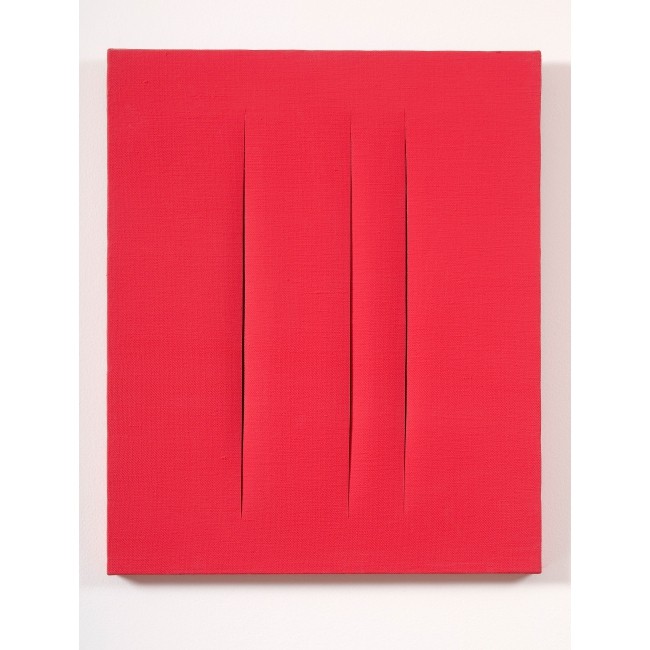 The Musée d’Art moderne de la Ville de Paris presents a major Lucio Fontana (1899-1968) retrospective. Considered one of the greatest visionaries of the 20th century, his work deeply influenced several generations of artists, from Yves Klein to the present. For the first time in France since 1987, more than 200 sculptures, paintings, ceramics and installations provide an overall view of his atypical path and his ever changing styles.

Born in 1899 in Rosario, Argentina, son of an Italian-born trained sculptor, Fontana would spend most of his life in Milan. Exploiting all the possibilities offered by sculpture (terracotta, ceramic, mosaic) and extensively collaborating with architects, he was one of the first Italian abstract artists in the 1930’s. During World War II he sought refuge in Argentina. Back in Milan in 1947, he became the leader figure of the Spatialist Movement, which he extensively defined and explained in his Manifestos. Light and real space (in opposition to virtual space) are the two essential elements of this movement that intended to create a new kind of art, alluding to the Space Age but actively connected to the world around it. The artist is embodied in his ceramic sculptures, his perforated canvases and his installations. In 1949 he creates his first Concetti spaziali (Spatial Concepts), a series of punctured canvases which he later intervenes using different materials and bright colors. Following a retrospective show at the Venice Biennial in 1958 he conceives the Tagli series, incisions on canvas. This works became a key reference for artists in the 1960’s.

The exhibition, presented in collaboration with the Fondazione Lucio Fontana, highlights the diversity of his work, between abstraction and figuration, metaphysical quest and incarnation, utopia and kitsch, technological fascination and amorphous materials. His slashed canvases, iconic works of modern art, are brought into confrontation with least-known pieces, in particular his 1930’s sculpture and his ceramics, most of which are exhibited inFrance for the first time.