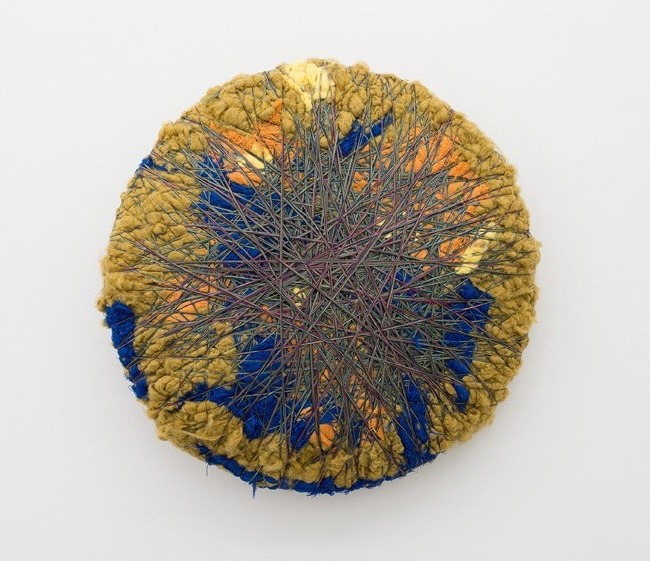 "Pull on this fibre: it unfurls into an extraordinary line that you can write with in two or three dimensions. For a long time now this idea of a line travelling through space has been haunting my imagination and carrying me with it." (Sheila Hicks)

Sheila Hicks began this project with a lengthy exploration of the museum lobby. Drawn to Lucio Fontana's 1951 neon work in the reception area, she felt a connection between its luminous line and her own creative investigations: "My work is based on lines, which form sculptures in space." Fontana's line describes the trajectory of the planets, while Hicks adds satellites which she composes on the wall like an interplanetary constellation. As she sees it, the language of threads is universal and forges a link between human beings. This is why, in shaping her projects, she studies not only the specific features of the site, but also the characteristics of the viewing public that becomes her principal accomplice. The artist creates colours which are rarely found in nature. With an understanding of the subtle manner in which they are perceived, she invents original mixtures by associating unexpected tints, textures and light.

Born in Hastings, Nebraska in 1934, Sheila Hicks has been living and working in Paris since 1964. Initially a painter, she broadened her creative field to include soft and flexible materials, drawing on the age-old arts of textiles. Wrapped, woven, embroidered, knotted and braided, her works – made of natural and experimental industrial fibres – fluctuate between the sculptural, the pictorial and the spatial. Since 1956 she has been interested in the highly complex weaving techniques of pre-Columbian civilisations and proceeded to employ them to her own artistic language. For her each creative venture represents a fresh, intense colour experiment that generates an infinity of poetic associations.