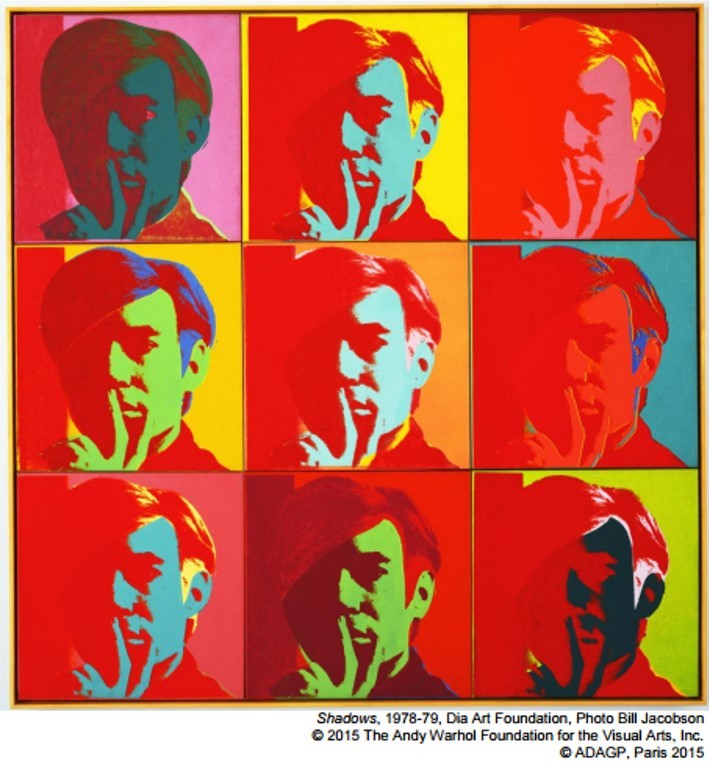 As a setting for the first European showing of Shadows (1978-79) in their entirety, the Musée d'Art moderne de la Ville de Paris is devoting a remarkable exhibition to Andy Warhol (1928-1987). Comprising over 200 works, Unlimited highlights the serial side of the Warhol oeuvre – a crucial aspect of his work – and his ability to rethink the way art should be exhibited.

Housed at the Dia Art Foundation, Shadows is a striking group of 102 silkscreened canvases of 17 different colours whose length totals more than 130 metres. These works are a commanding reminder of Warhol's flouting of art's conventions, from the conception of works through to their presentation. Asked if these pictures were art, Warhol said no: "You see, the opening party had disco. I guess that makes them disco décor." His art represents a challenge which the Musée d’Art moderne de la Ville de Paris extends to include series like the Electric Chairs (1964–1971), the Jackies (1964), the Flowers (1964–1965) and the Maos (1972–1973).

The often controversial way Warhol staged his own work is a core part of the concerns driving this exhibition. Here we find a constant engagement with space and time as means of reshaping our modes of perception. Unlimited invites viewers to let themselves be submerged by the sheer quantity of works ranging from the Brillo Boxes (1964) to the Self-portraits (1966–1967, 1981), from the Screen Tests (1964–1966) to the Cows wallpaper (1966) and from the Flowers groups to the Mao friezes, not to mention experimental film (the famous eight-hour Empire of 1964), the Silver Clouds (1966) and the spectacular environments created for concerts by the Velvet Underground (Exploding Plastic Inevitable, 1966).

As lauded as he was criticised, Warhol – despite the virtually permanent media overkill he was subjected to – never lost his ability to destabilise the viewer. And notwithstanding his superficial "King of Pop Art" image, he endlessly reinvented the interrelation between spectator and work. Constantly breaching the codes he was saddled with, he compelled recognition as a master of excess: in all the many forms he explored, his relationship to the artwork always tended towards the breaching of boundaries.
www.mam.paris.fr