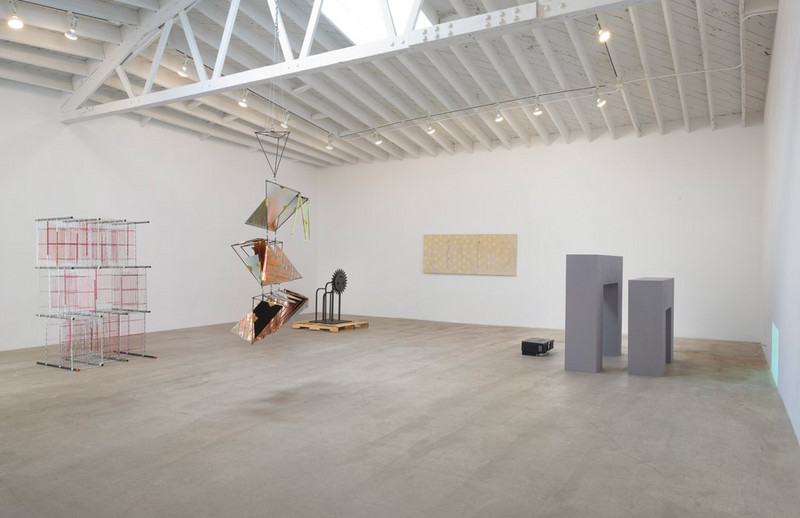 MARC FOXX is pleased to present 8 DAYS A WEEK, a two person exhibition by Los Angeles based artists Jason Meadows and Mateo Tannatt.

8 Days a Week is the result of an informal exchange between Jason Meadows and Mateo Tannatt regarding their local practices and the cross-overs and differences in their approaches towards their projects, and in particular, their sculpturally based works. Both artists have a strong R&D based studio practice, an environment of exploration and experimentation for the artists producing fusions of form and materials providing very different results. Art historical precedents, craft, theatrical props and ideas of narrative all present themselves within the exhibition.

Meadows, a 1998 graduate of UCLA has a strong knowledge and love of modernism and incorporates this information along with references to his interests in popular culture, systems and virtual space. Jason Meadows’ technical skills are abundant and his athletic studio process is very specifically and skillfully DIY. Meadows’ total control over material decision making in order to produce a “found” effect can often times necessitate the engineering of every element of an entire work from raw material to fastenings. In addition, Meadows is highly regarded for his work with systems and the ready-made, evident in Cipher & Moonrise, where his manipulation and reorganization of industrial Metro shelving into optical works that play to the idea of transparent Judd space & Ansel Adams’ photographic oeuvre of cosmological time, respectively.

Tannatt, a 2008 UCLA graduate, has a poetical and fluid relationship to materials and to the studio. Tannatt’s studio approach includes painstakingly making prototypes, models & molds in service of transforming the qualities of initial materials into other materials through the dialogue, cooperation & close collaboration with industrial producers colonizing their spaces into his studio.

On view is Happy Sunflower, a work in welded steel & aluminum, which began with a sculptural scale model and dozens of studio plaster molds of the “face” of the flower then cast into aluminum. The artist decided during the process with the aluminum producer to show the back of the cast and then finally take away the alumium-ness by patinating the entire steel and aluminum sculpture in gunmetal black.

Meadows and Tannatt have on exhibition works citing other artists. Copperhead considers Ellsworth Kelly’s sharp space that becomes, in Meadows hands, a deep virtual, pixelating, tactile field hanging in space from the ceiling (also possibly a Gucci handbag?). Tannatt, while working on predetermined “hanger” forms he was translating into glass elements for wall mounted sculptural/painting work, re- remembered an aspect of Mike Kelly’s “Uncanny” project and incorporated the reference into his intention of “breaking in” and how we now “break in” in virtual ways i.e. codes & “watermarks.”