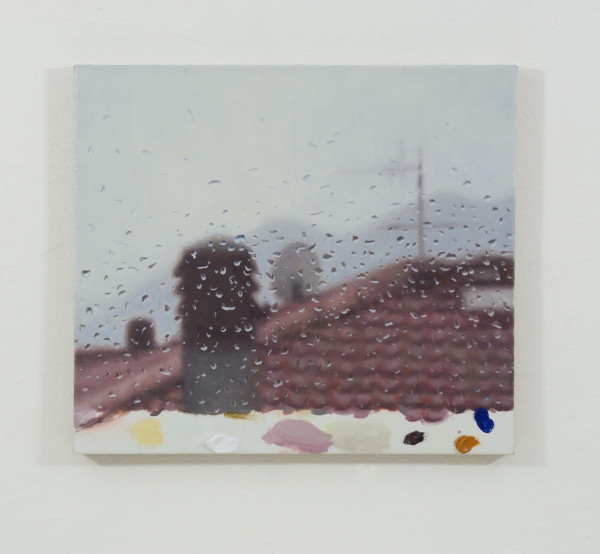 The gallery is pleased to present in his first American exhibition the work of Italian, Tuscan based artist Luca Bertolo. The 2015 paintings on exhibition are comprised of works from the artist’s Guerre Pace project and new paintings in reflection.

In his Guerre Pace (War’s Peace) body of work Bertolo sought to consider the contradiction between the “willingness of human beings to inflict suffering on their neighbors and the evident pointlessness of history” and concurrently, “the serenity and quiet joy of family intimacy.”

In reference to his intentions, Bertolo has excerpted Curzio Malaparte’s, Kaputt, 1944:

“There are countless families of beautiful birds in Ukraine. Thousands fly chirping through the leaves of the acacia trees, perch lightly on birch branches, ears of wheat, and the golden rims of sunflowers, pecking seeds from their big black eyes. They sing in flight with the roar of howitzers and the stutter of machine guns in the background, warplanes screaming high over the immense Ukrainian plain. They alight for a moment on the backs of the soldiers, ride in the saddles and the manes of the horses, on artillery mounts and rifle barrels, the turrets of the Panzers, and atop the boots of the fallen. They have no fear of the dead. They are minute, swift, cheerful birds. Some are gray, some red, some yellow. Only the chests are red or turquoise on some. Only the neck or tail on others.“

The act, materials and time of painting are directly addressed in Bertolo’s work. Finished and highly rendered areas of Bertolo’s painting are offset by unpainted and painted out portions and in several cases the paintings contain drips and dabs of paint in the unfinished areas formatting the time, potential and decision making of the process. The intimacy, hopefulness and meditation of flower arranging is contrasted by the direct war reference in, Untitled 15#02, a depiction of a camouflaged helmeted solder whose face is mostly obscured by colorfully painted netting, which could be more like beekeeping than war making. The beautifully trompe l’oeil painted folds and the somber and bright tones in Flag, 2015 disturbs its modernist composition and brings together Bertolo’s interests in quiet intimacy and the pointlessness of history.