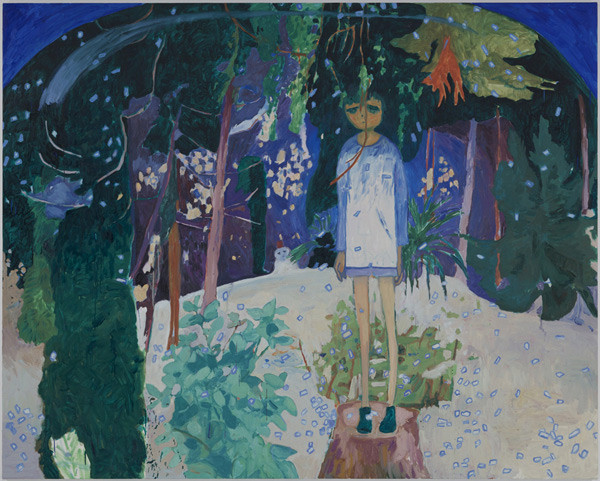 Makiko Kudo’s paintings are inspired by traditional Japanese imagery of plant and animal life as seen through a contemporary filter. Kudo has been linked to a young generation of Japanese artists in a movement termed “Micropop”, an after-burn of its forbearer, “Superflat”. Micropop and its proponents are interested in interior life and self mythologies, with the world constructed in the intimate and private spaces of its practitioners using low and humble materials, separate but not disassociated from the technological world.

Midori Matsui, the art critic who coined the term, has written that, “The expressions of this new art thinks up new ways to use abandoned things, such as old legends and empty spaces, creating venues for communication... The term "Micropop" is used to describe the attitude or approach to life that creates an unique and original path of living or aesthetics by combining fragments gathered from various places, without relying on institutional morals or major ideologies.”

The nine new paintings in the exhibition occupy space with both figuratively familiar imagery as well as dream-like abstraction. The combination of the artists’ masterfully expressive brushwork and vibrant, almost fauvist pallet, are unusual in contemporary Japanese painting, yet are engaged in the intimate and private worlds of the “here and now” of the Micropop dialogue. While the girls in all of her paintings are not direct self-portraits, they each illicit sympathy from Kudo as well as the viewer, inviting a personal connection, a place where each of the girls can meet again, inside the viewers consciousness. Kudo’s paintings offer an individualist look at a moment that is intimately imbued with emotion, opening up a texturally imaginative and animated world.

Makiko Kudo was born in 1978 in Aomori, Japan. She graduated from Joshibi University of Art and Design with a specialization in oil painting in 2002. Kudo’s recent solo exhibitions have been at Tomio Koyama Gallery in Tokyo as well as at the TOMODACHI Takahashi Collection. She was included in Winter Garder: The Exploration of the Micropop Imagination in Contemporary Japanese Art at the Museo Universitario del Chopo and Takashi Murakami’s book, Tokyo Girls Bravo. lives and works in Kanagawa, Japan.
www.marcfoxx.com