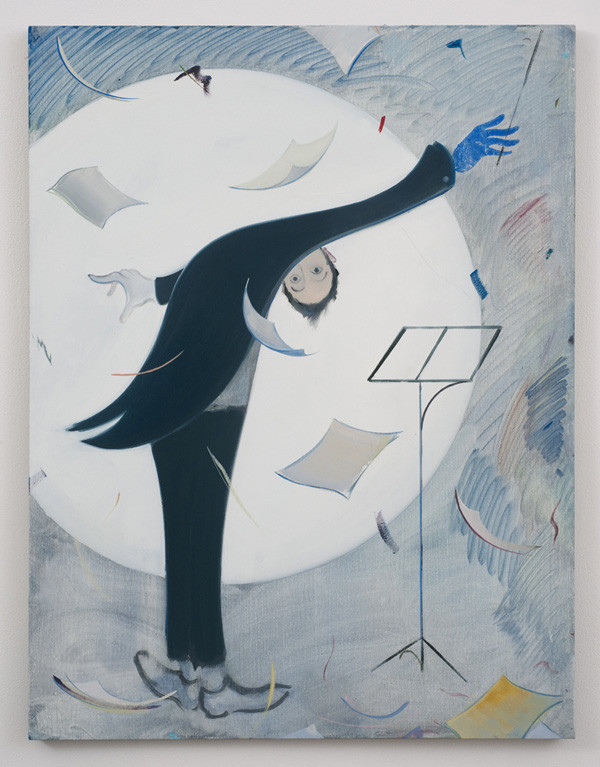 The title of the exhibition is adopted from the above poem penned by the writer Daniil Kharms in 1937, a few years before his arrest and execution at the height of Stalin’s repression. A vanishing portrait of a “redheaded man”, Blue Notebook No 10 offers an absurdist negation of physicality and form. Avoiding a potentially nihilistic position, Kharms establishes an ontological presence that persists through physical erasure, briskly probing the limitations of our material and linguistic conditions.

Kantarovsky’s paintings, sculptures and video dwell within the same interstices of presence and absence, of figuration and abstraction. Through visual puns and gestural traces, the figures in Kantarovsky’s paintings draw attention to their framed environment and pictorial confinement. The compositions that approach abstraction always retain a tether to the body, echoing the questions that emerge out of The Blue Notebook. Kantarovsky imbues the figures in his paintings with an affect that evokes a legacy of symbolism and allegory. These paintings, which all take their titles from Kharms poems, look towards and echo episodes from the poet’s work and life. The Man in the Black Coat, 2012 for instance, portrays a pair of ominous black-booted figures flanking a barefoot man clad in pajamas, a pipe (Kharms’ signature accessory and ex-libris) dropping from his limp hand, suggesting the beginning of an end.

The language of figuration and analytic abstraction in Kantarovsky’s project are reminiscent of Russian Modernist cartoons, illustration, and design, is reframed in the more hermetic and programmatic strategies central to western contemporary art. At times poetic and at others bordering on constrained, Kantarovsky’s works reflect on the divergent methodologies of east and west and mine personal and collective history, language, and memory.

The central grouping of sculptures function as an architectural compass in the exhibition. Their transparency reveals the processes of drawing and looking, at once fragmenting specific paintings and bringing others together.

At times, the sculptures draw the threads of peripheral narratives together with the paintings, appearing as familiar, nearly generic stand-ins for constructivist assemblage, reminiscent of El Lissitsky or Naum Gabo. The steel sculpture Shabolovka, 2012, a freestanding pair of steel ovals, one patterned and the other empty—borrows its name from the Moscow neighborhood where Kantarovsky spent his childhood. The pattern is drawn from the window grate of his pre-school, while its mirrored, empty counterpart suggests an absence and the distance of memory.

The two channel video installation in the west gallery pairs two cinematic gestures. On the left monitor, a languid pan of a seemingly infinite multitude of scattered blank pages is eventually interrupted by a black rectangle in the center of the screen, evoking both Malevich’s iconic Black Square and the marks of omission, censorship, or amnesia. The right channel plays a faithful reconstruction of the title sequence to a Russian television program for teenagers that aired in the Soviet Union throughout the 1970's and 1980's. The installation shares its title with the program, Before 16 and Older. This sequence of a young boy running down an infinite open road toward a perpetually receding camera was aimed at illustrating youthful freedom, hope and exuberance. The message was certainly a false promise under the Soviet Regime, yet ultimately became an icon for a new generation of Soviet youth in the era of perestroika. The black rectangle reappears over this sequence, preventing the viewer from identifying the boy as he approaches the camera. As the boy comes closer still, his hands and feet peek out from beneath the box, creating an odd anthropomorphized rectangle. Here, as in much of the work in the exhibition, tragedy and loss imbricate optimism and humor. The location of the shot, an empty California desert road, is a nod to the artist’s current city of residence, Los Angeles, and its own paradigm of vacancy and potential. A blank page.

Sanya Kantarovsky’s group exhibitions include a screening at Lost and Found at the New Museum in New York, and recently Phases, curated by Wallspace and Kelly Taxter at Wallspace, New York. He studied at the Rhode Island school of Design, participated in the Skowhegan School of Painting and Sculpture residency, and received his Masters in Fine Arts degree from the University of California, Los Angeles in 2011. He lives and works in Los Angeles.
www.marcfoxx.com