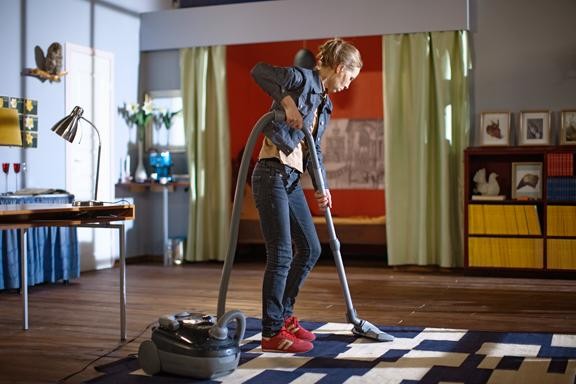 Marian Goodman Gallery is pleased to announce an exhibition of new work by Eija-Liisa Ahtila presenting the North American premiere of The Annunciation (2010) in the North Gallery, a new series of drawings, Anthropomorphic Exercises on Film, in the North Gallery Viewing Room, and a multi-screen video work, Horizontal, in the South Gallery.

Eija-Liisa Ahtila has long been considered a master of the multimedia form. Her work is conceptually organized around the construction of image, language, narrative, and space, and she has often probed individual identity and the boundaries of the subject in relation to the external world. Using the visual language of cinema, Ahtila presents large-scale installations with split-screen projections on multiple panels. These viewing conditions, with their simultaneously charged vantage points, break the idea of cinematic perspective and construct an experience of several coexisting times and spaces for being.

In her most recent works she critically examines the cinematic mechanisms for perceiving and presenting the world and looks at the dramaturgy of the moving image from the posthumanist point of view. Instead of creating a coherent character subject, she aims at decentering the human in relation to the other creatures and surroundings depicted in the work. She poses the question: how will the dramatic narration be transformed if it is not based on human centered action? What will the character subject form into and what implications will it have on “acting” or being in the image?

The Annunciation is an installation of three projected images in which one of the central motifs of Christian iconography is constructed and re-enacted through moving image. It is based on the narrative in the Gospel of Luke (1:26-38) and on paintings of the Annunciation in which artists have, in various periods, depicted their visions of the gospel’s events. In this Annunciation the events are set in the present. The installation of three projected images consists of material made during the film’s preparation and an actual reconstruction of the event of the Annunciation. The footage was shot mainly during the frosty winter season of 2010 in the snowy Aulanko nature reserve in southern Finland and on a set depicting an artist’s studio and the scene of the Annunciation. All human actors, except for two, are non-professionals. Most of them are clients of the Helsinki Deaconess Institute’s women’s support services. The animal actors are a trained raven, two ordinary donkeys and a group of carrier pigeons from a bird farm. Although based on an existing script, the events, roles and dialogue were adapted during the filming process to the actor’s individual presence.

An underlying viewpoint to The Annunciation is Jacob von Uexküll’s idea that the different worlds of living beings all exist simultaneously. The idea is used as the approach for an exploration of the nature of miracles and the possibilities of perception and knowledge. In the work, the actors are engaged in a process of reconstructing the sacred and redefining the human through the divine and the animal.


Extract from A Stroll through the Worlds of Animals and Men, Jakob von Uexküll (1957) :
“ We are easily deluded into assuming that the relationship between a foreign subject and the objects in his world exists on the same spatial and temporal plane as our own relations with the objects in our human world.
“This fallacy is fed by a belief in the existence of a single world, into which all living creatures are pigeonholed.
“This gives rise to the widespread conviction that there is only one space and one time for all living things. Only recently have physicists begun to doubt the existence of a universe with a space that is valid for all beings. ”

Ahtila leads on this idea in Horizontal, which centers upon a detail from The Annunciation, one of the tall Spruce trees in the Aulanko nature reserve as well as in her new set of drawings, Anthropomorphic Exercises on Film. In both works she approaches the idea of human centeredness, how we perceive nature, how the medium of film articulates the world around us, how it guides our perception, and affects the knowledge that we receive and our resulting sense of perspective. Ahtila’s drawings act as the very key to her singular approach to film making.

Eija-Liisa Ahtila studied at the University of California, Los Angeles, at the London College of Printing and at the University of Helsinki. An important retrospective of her work was shown at the Jeu de Paume Paris and travelled to K21 Kunstsammlung Nordrhein-Westfalen in Dusseldorf in 2008. Her work has been exhibited in solo shows at: DHC/Art Foundation for Contemporary Art, Montreal; The Museum of Modern Art, New York; Parasol Unit, London; Museo d’Arte Moderna e Contemporanea, Bolzano, Italy; Dallas Museum of Art, Dallas, TX; Dundee Contemporary Arts, Dundee, Scotland; Kunsthalle Zurich; Tate Modern, London; Kiasma Museum of Contemporary Art, Helsinki, and more.

Her work has been included in many international group exhibitions, including the Venice Biennale (2005 and 1999); Documenta 11, Kassel (2002); Biennale of Sydney (2002); Kwangju Biennale, South Korea (2000); Istanbul Biennale (1997), as well as numerous international film festivals and screenings.

Ahtila has been honored with numerous prizes over the past two decades that include, most recently, becoming an Academician of Arts in Finland (2009); The Prince Eugen Medal for Outstanding Artistic Achievement, Sweden (2009); Artes Mundi, Wales International Visual Arts Prize, Cardiff, Wales (2006); The Vincent van Gogh Bi-Annual Award for Contemporary Art in Europe, Maastricht, The Netherlands (2000); the Coutts Contemporary Art Foundation Award, Switzerland (2000), among many others.

The Annunciation has been presented as an installation in Helsinki and Paris, and in September its film version had its premiere as the official closing film of Orizzonte series at the 68th annual Venice Film Festival, 2011.
www.mariangoodman.com