Equal, That is, To The Real Itself 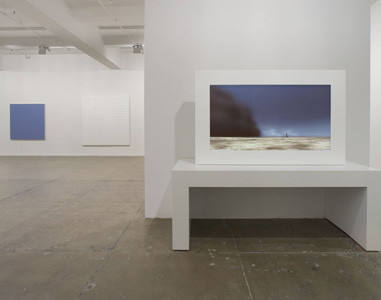 EQUAL, THAT IS, TO THE REAL ITSELF

EQUAL, THAT IS, TO THE REAL ITSELF takes its title from the maverick mid-20th century poet, Charles Olson, but the larger idea at play is a rethinking of the Brechtian, avant-garde assertion that every urgent circumstance requires its own form. Olson’s source for the essay to which he gave this title, however, was not Brecht, but John Keats, whose celebrated notion of “negative capability” and disparaging of what he described as the “irritable searching after fact” incited Olson to lobby instead for “congruence” between art and experience. Each of the artists in the exhibition conveys through their work a palpable sense of urgency provoked by some direct, lived experience or close observation of the world. Each artist, that is, posits a correlate, something made and shown which feels “equal,” that is, to a “real.”

Steve McQueen’s self-proclaimed interest, circa 2002, in moving from his intensive formal and structural experiments with film and video to an art “in the service of the real” was a starting point. But Roni Horn’s attention to “the necessary inclusion of circumstance” in her work, and the opportunity to juxtapose her 1988 Asphere, a dense, cast copper analogue for her androgynous sense of self, to John Wesley’s 1990 New Work, a cartoon-calamity allegory for a collective American experience of the “made-for-TV” first Gulf War, were equally central to the exhibition’s genesis.

Charles Ray’s Puzzle Bottle, 1995, may be more obviously self-referential than Horn’s cast copper “androgynous self-portrait,” but its intimations of containment, literal and figurative, are also oblique and abstract. McQueen’s contribution to the exhibition, his 2006 installation Escapologist, comprises an entire wall of prints featuring the artist posed like Warhol’s Elvis and outfitted in “Bruce Nauman’s black and white.” Reconfigured by the artist for the South gallery, Escapologist responds, on the one hand to both Horn’s and Ray’s expressions of self and of containment and on the other hand to the self-referential “studio exercises” of David Hammons’ 1995/1998 Phat Free and Bruce Nauman’s 1967 Walking in an Exaggerated Manner around the Perimeter of a Square.

Other works include Ed Ruscha’s saturated 16 mm color film, Miracle, 1975, a surreal period piece in which the efforts of a mid-70’s car mechanic to purge the exhaust of a cherry-red Corvette by recalibrating its carburetor prove profoundly paradoxical; a triad of protracted, real-time Sheep Rushes in which anthropologist filmmakers Ilisa Barbash and Lucien Castaing-Taylor capture the routine breeding, shearing, and pastoral containment of thousands of sheep on one of the last operative, commercial American sheep ranches; Pierre Huyghe’s account of the copyright restitution for the singer source of Walt Disney’s Snow White, Blanche Neige Lucie, 1996; and John Gerrard’s efforts to re-enact the effect of widely circulated web footage documenting debilitating dust storms in Bazra and conflate these with vintage photos of the equally devastating waves of sand that barreled through the American west during its “dust bowl” years. Leslie Thornton’s Let Me Count the Ways, Minus Ten, Minus Nine, Minus, Eight, Minus Seven...2004, conflates audio testimony from a Hiroshima survivor with aerial views of post-911 Manhattan. The segment featured here, one of four, confounds the distant cityscape imagery by superimposing a blinding halo of blue. Less obviously urgent or engaged with an observable external world, Rudolf de Crignis’ meticulously applied layers of variously colored pigment, which somehow always add up to grey or blue, make palpable another evidence of emotion. De Crignis, who died suddenly this past fall, always insisted that an intensity of personal experience could be brought into an abstract painting.

The show unfolds over the full space of the gallery, opening in the North Gallery with John Gerrard’s expansive, sculptural digitization of an endless dust storm, which he’s sited onto scanned data gathered from the Texas panhandle and from archival photos of one of the nation’s most extreme human-induced “natural” disasters, the 1935 so-called “Black Sunday” storm that devastated huge swaths of the midwest dust bowl prairie, in this case, a farm owned by the Grice family.

Behind this entry wall, the North Gallery is quiet. Only one video work, Huyghe’s Blanche Neige Lucie, hangs in the room, though the voice of “Lucie” permeates its space and makes the miniaturized Charles Ray, standing alone in his Puzzle Bottle, 1995, a captive audience of one. The rest is painting: Wesley’s hilariously, deliciously menacing Horses and Clouds, 1988; Bridget Riley’s coolly controlling optical grid, Static 4, 1966; and de Crignis’ luminous untitled canvases from the early 2000s.

In the South Gallery, Bruce Nauman’s relentless circumvention of the taped “square” in his studio, choreographed by Meredith Monk, opens onto the 160 printed McQueen poster portraits, which in turn face off against Hammons’ not entirely laconic stroll, kicking a can along and across a Bowery intersection. Between these galleries, in the long hall, Thornton’s personal video memoir jostles with Chris Marker’s more distant critique and medium-driven declaration of the link between form and circumstance, a single channel segment of his first experiment with video, Quand le siècle a pris formes (Guerre et Revolution) [When the Century Took Shape (War and Revolution)], from 1978. Originally conceived for the Pompidou, and virtually unseen in the U.S., the videos feature “colorized” archival footage from the Russian Revolution and First World War and a soundtrack by Hans Eisler. In the screening room off the long corridor, the Sheep Rushes of Barbash and Taylor, and Ruscha’s Miracle, convey more environmental and occupational hazards and efforts to contain.
www.mariangoodman.com