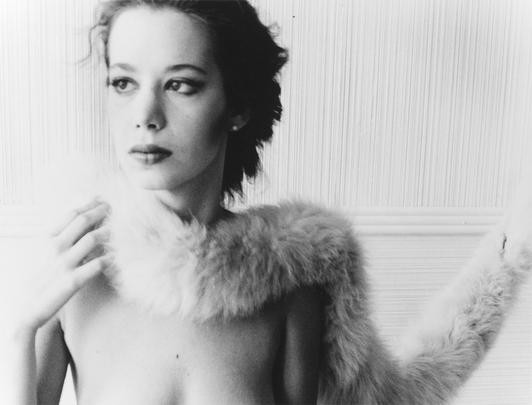 Marian Goodman Gallery is pleased to announce a solo exhibition of the vintage work of Francesca Woodman. I’m trying my hand at fashion photography will be the fourth solo exhibition in the New York space dedicated to Woodman’s vintage photographs, following our inaugural exhibition in 2004 and sequels in 2008 and 2012.

The show will focus on a selection of approximately thirty works following the successful survey exhibitions held at the Museum of Modern Art San Francisco, and Guggenheim Museum, New York, and will be on view in our third floor Project Space from February 12th through March 13th, 2015.

This group of pictures is dedicated to Woodman’s fashion photographs which she pursued and developed in the later years of her life, between 1978 and 1980 primarily while living and working in New York City. Most are shown here for the first time. The works form a finite chapter within Woodman’s oeuvre when she was continuing to explore the female subject both through self- representation and the positioning of models within the image, but with an eye toward the commercial realm.

Francesca Woodman’s fashion photographs had many precursors during her formative years in Colorado, Italy, Providence, and New York City and antecedents can be found not only in her images, but also in her working notebooks, drawings, and artist’s books. As Alison Gingeras writes, “fashion had become a vital tool for both Woodman’s emerging artistic practice as well as for her self-definition. More than just providing props, fashion was a creative catalyst in her life and in her image making.” From an early age, she had a “conceptual understanding of fashion as a powerful signifier and performative tool. ”

Early inspirations for this body of work, as noted by scholars, included Surrealist traditions as well as Gothic proclivities that had previously infused her work. However the fashion pictures also suggest the influence of such photographers as Deborah Turbeville, who was aptly navigating a balance between commercial and critical success with her melancholic, narrative images, and Guy Bourdin, whose fetishized female subjects may have been objects of Woodman’s fascination. “Mirroring the paradigms pioneered by the triumvirate of fashion photographers that ruled the pages of Vogue in the late 1970s—Helmut Newton, Guy Bourdin, and Deborah Turbeville—Woodman’s approach to the genre shunned the simple foregrounding of clothes and accessories. Emulating this Seventies fashion editorial archetype, Woodman’s images were deliberately constructed to entice the viewer into consuming a complex story rather than the products that might be featured in the pictorial. ” (Alison Gingeras, Francesca Woodman: Another Almost Square, A Fashion Photograph, New York: Marian Goodman Gallery, 2015.)

A new catalogue published on the occasion of the exhibition, with an essay by curator and writer Alison Gingeras titled Francesca Woodman: Another Almost Square, A Fashion Photograph, examines the images, their circumstances and influences. The text, devoted to this group of photographs largely unknown to the public, considers the fashion pictures within historical and biographical contexts, and offers a new perspective on Woodman’s widely respected body of work.

Woodman will be the subject of a forthcoming solo exhibition at Moderna Museet, Stockholm in September, which will then travel to other European museums. Important recent solo exhibitions include Francesca Woodman: Works from the Sammlung Verbund at the Sammlung Verbund in Vienna, Austria (2014); the aforementioned retrospective which traveled from the San Francisco Museum of Modern Art, California (2011) to the Guggenheim Museum, New York (2012), for which a monograph Francesca Woodman was published (2011: San Francisco MoMA). Other solo shows include; Artist Rooms: Francesca Woodman, Tate Modern (2007) and Scottish National Gallery of Modern Art (2009); Francesca Woodman, Espacio A.V., Murcia, Spain, which traveled to SMS Contemporanea, Siena, Italy (2009) and Palazzo della Ragione, Milan, Italy (2010); dating back to the Fondation Cartier pour l'art contemporain, Paris, France (1998) and a subsequent European tour; and Francesca Woodman: Photographic Work, Hunter College Art Gallery, New York (1986) and Wellesley College Museum, Wellesley (1986).