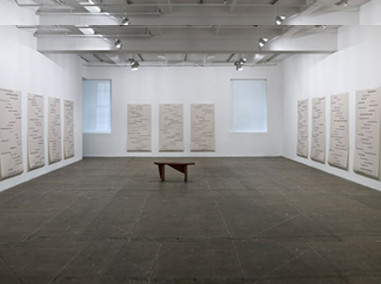 Marian Goodman Gallery is pleased to announce an exhibition of recent work by Gabriel Orozco which will open on May 6th and run through June 14th, 2008.
Orozco presents a new work based on obituary headlines of individual notoriety and accidental fame taken from The New York Times. Extracting anecdotal aspects of the identity, cause and date of the deceased, he cuts and pastes the remains to reveal the poetics, wit and drama of the perception of public life in the press. Orozco, whose work has been known for the use of the symbolic as a recyclable material and for the fragmentation and removal of cultural entities as an ongoing artistic practice, gives us a reflection on the semiotics of the news as a potentially poetic object.
Presented for the first time is a wooden bench whose prototype, made in December 2007, was built up from the ephemera of scraps of wood found and recycled from the construction site of the artist’s observatory-house in the ocean shore of Oaxaca. Initially assembled by the artist as a functional piece of furniture from the leftover materials of the workers, this remake of the original piece was specially fabricated for the exhibition.
The terracotta based sculptures Torso (2005), Pelvis (2005), and Head (2007) are bodily fragments from an ongoing series begun in 2005. Made by rolling and pressing masses of clay which sometimes have an equivalency to a corresponding weight of the artist, as in Torso for example, Orozco’s actions with clay can be seen as a continuation of his research started with pieces like My Hands Are My Heart from 1991 and the Yielding Stone of 1992. About this series, created with the gravity and pressure of the artist’s own body, Benjamin Buchloh writes in the catalogue for the retrospective exhibition at Museo del Palacio de Bellas Artes, Mexico in 2006:
”Nothing would appear more improbably, if not outright impossible, than a perfect fusion of sculptural chance operations and a perfectly rendered bodily morphology. Yet we could argue that this is precisely what Orozco’s sculptures... achieve in an utterly stunning bravura act, walking the tightrope between a totally amorphous regression of form, the mere result of process and chance, and a bodily representation bordering on a surrealist, if not neoclassical authoritarian, resuscitation of the traditionally modeled body part.... Paradoxically it is an intensity that results from a total suspension of sculptural intention, and from the total absence of mimetic modeling in Orozco’s terracottas. This paradoxical synthesis of supreme chance and sublime bodily representation is almost inadvertently attained. Not surprisingly, it can occur only in the fragment, spatially defined as the part object of the body, temporally defined as merely one arrested moment from a continuous flow of processes of production, all equally valid”.
A series of drawings on notebook paper drawn with the ink traditionally used in ornamental body painting were made during a stay in a remote village in Amazonas and are accompanied by the shards of broken pottery found on the mud floor’s site and used as paper weights while the ink was drying. Related to the drawings, a group of new photographs provides a sustained discourse between Orozco’s image and object making. Photographs like Bubble on Stone, Showerhead, Lunch in Amazonas, Palm Root, Meat Cross, and Iguana Grid, among others recently shot in Mexico and Ecuador, are shown alongside a series titled Black Kites Sequence, a set of nine recently printed black & white photographs of Orozco’s seminal sculpture of a cranium with graphite shot immediately after the work was finished in 1997.
A new series of plaster and wax drawings created by dipping paper into liquid plaster and sometimes drawn with graphite or acrylic paint, are accompanied by a series of Galaxy Bowls made in plaster, concrete, black acrylic paint and paper made from molds of half-spheres and containing vessels and concentric forms expressing both rotation and enclosure.
The use of the canvas as a container or an envelope is conceptually present in the Dépliages (2008, oil on linen). Orozco’s process entails depositing oil paint directly from the tube into the center of a square piece of linen, folding and compressing the fabric, then unfolding it and generating a flow of liquid inside the pocket of material which results in a final image, ‘map’, or imprint. “The moment you fold the paper to become an envelope, it is an object, but then when you unfold it, it becomes an image, hidden in the envelope. There is a circular movement between an object and a picture, folded and unfolded.”...(G. Orozco).
The new large scale paintings continue an exploration of Orozco’s ongoing interest in spatial, geometric and organic processes. The works present complex geometrical drawings in which the focus is on the remains and the leftovers, the interstitial spaces between circles, the movement of bodies colliding and intersecting and generating new areas in between. Included are large scale gold-and-tempera works on canvas; new Samurai Tree works on canvas and wood; as well as the Troncos, the geometric ‘icon’ paintings on blocks of wood.
Important future projects include a solo exhibition planned for The Museum of Modern Art, New York which will open in late 2009, and will travel to Kunstmuseum Basel; Centre Pompidou, Paris; and the Tate London through 2011.
Orozco’s work was recently on view in Gabriel Orozco: Inner Circles of the Wall, at the Dallas Museum of Fine Art, Texas, through the end of March. Over the past few years, one-man shows of the artist’s work have been shown at the Museo del Palacio de Bellas Artes, Mexico City; the Museum Ludwig, Cologne, 2006, in conjunction with the prestigious Blue Orange Prize awarded by the Deutsche Volksbanken and Raiffsisenbanken that same year; Palacio Cristal, Museo Nacional Centre de Arte Reina Sofia, Madrid, 2005; Serpentine Gallery, London, 2004; Hirshhorn Museum and Sculpture Garden, Washington, D.C, 2004; Douglas Hyde Gallery, Trinity College, Dublin, Ireland, 2003; as well as MoCA Los Angeles; Museo Tamayo, Mexico City, and Museo de Arte Contemporaneo de Monterrey, Mexico, 2000-2001.
Please join us at the opening reception on Tuesday, May 6th, from 6 to 8 pm.
www.mariangoodman.com