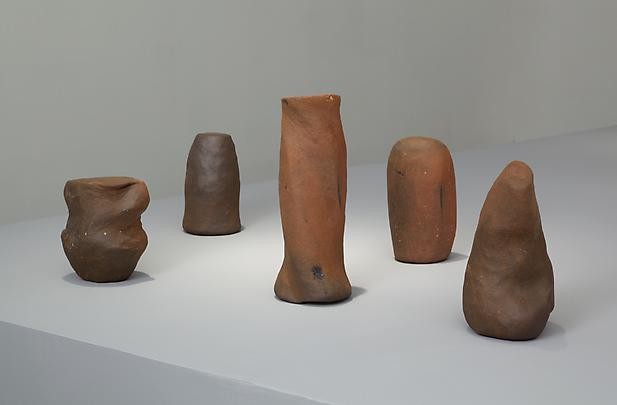 Marian Goodman Gallery is delighted to announce an exhibition of new work by Gabriel Orozco which will open to the public on Wednesday, September 14th and be on view through October 15th.

This is Orozco’s first solo exhibition to follow his recently completed retrospective tour that began in December 2009 at the Museum of Modern Art in New York and traveled to the Kunstmuseum Basel, the Centre Pompidou, Paris, and ended at the Tate Modern, London, in May of this year.

Two new bodies of work will be introduced in this exhibition. In chronological order, the first, titled Corplegados, is a series of large format drawings realized over the course of the last four years as a private, intimate activity amidst busy preparation for his retrospective. The Corplegados, or literally ‘folded-bodies’, are all purposefully life-size. Orozco folded the paper four times in halves to become portable documents which accompanied him on his many travels. Orozco would work with the paper sometimes hung, sometimes flat on the floor, or sometimes folded on his desk in sections like pages of a book. Over time, the paper amassed numerous layers of ink and gouache, as well as writing and sometimes pasted photographs. Orozco has referred to the Corplegados as a kind of “expanded notebook” and they share the same components with his known notebooks in that both serve as a companion to the artist over long periods of time and relate directly to the environments in which they are created. Similar to earlier works like Havre-Caumartin (1999), the Corplegados are the manifestation of imprints of the body while interacting in specific situations. The relationship to his surroundings is an important element in all of Orozco’s work and the shift from natural to urban habitats is visually evident in the series as each drawing transitions from bright, colorful, painterly gestures to linear, geometric shapes and a more muted palette. These alterations reflect the different psychological and/or environmental changes to which the artist and his drawings have been exposed to over long periods of time.

Similar to his earlier Dépliages (2007), the artist is again playing with the three dimensional aspect of folding in this new project, dropping the color liquids while the paper is hanging and then folded, staining both sides of the paper randomly. Orozco has decided to present the drawings in double-sided glass frames which allow the viewer to turn - like a page - from the front; the “conscious” image, to the back; the “unconscious” image, which has been completely untouched by the artist and "made” only from the accumulation of the residue of materials seeping into the paper.

Orozco began the Particle Paintings almost a year ago in November, 2010. They continue his ongoing geometric research of the past twenty years using circular shapes inserted with rectilinear axels to explore behaviors of form and construction. The images used in the paintings are photographic reproductions of Orozco’s own photographs, found postcards, news images from the internet, as well as some of his favorite paintings from art history. Orozco utilizes the digital tools of vector and raster computer graphics to deconstruct, divide, and open up the images in circles of varying color, creating a data structure based on a grid but divided in dots. These dots are adjacent to each other and their order is rectilinear, not diagonal or spiral as is usual in offset photo reproduction. This resulting structure functions as a platform to execute Orozco’s interventions with new dots of color that are manually applied on top and/or juxtaposed in new grids over the digitally constructed structure. This process becomes a sort of particle game as the artist uses strategies of extraction and insertion to manipulate and develop a new topographical space. Grids appear frequently in Orozco’s work and precedents of the new paintings can be seen in early drawings such as, First was the Spitting (1993), and Puddles (1996-1997), where Orozco used graphs and computer generated templates to create a space in which to investigate the relationship between geometry and organic forms. More recently we see the exploration of this relationship in Orozco’s Samurai Tree paintings (2006-2011).

In the Particle Paintings the layering of the dots, in linear axels, creates pulsations of color that optically form larger grids establishing a filter that “burns” color into the brain. Orozco’s paintings dissect our perception through this filter, breaking apart and then reassembling the structure to create a new reading of the image without losing the original makeup. Orozco used similar techniques in earlier photographic based works, Lights through Leaves (1996, Parkett no.48), and in the Katagami series (2001), in which Orozco applied a visual filter of circles and axels to make the image behave differently, interrupting our memory and reconfiguring the interpretation of the image.

Along the corridor between the two galleries the artist has displayed the plates containing the tools used in the dot application for the Particle Paintings; the "leftovers" amassed during the process.

Also on view will be a new series of terracotta work. This work continues Orozco’s exploration of the medium that has been a part of his practice since 1991.

A fully illustrated catalogue will be published on the occasion of the exhibition and will include a new text by Benjamin H.D. Buchloh, Andrew W. Mellon Professor of Modern Art History at Harvard University.

Important upcoming projects include a commission at the Guggenheim, Berlin and New York in 2012-13 and a new exhibition at the Kunsthaus Bregenz, Austria in 2013. Recent solo exhibitions include the aforementioned retrospective, as well as at the Museo del Palacio de Bellas Artes, Mexico City (2006); the Museum Ludwig, Cologne (2006), Palacio de Cristal, and the Museo Nacional Centre de Arte Reina Sofia, Madrid, (2005).
www.mariangoodman.com