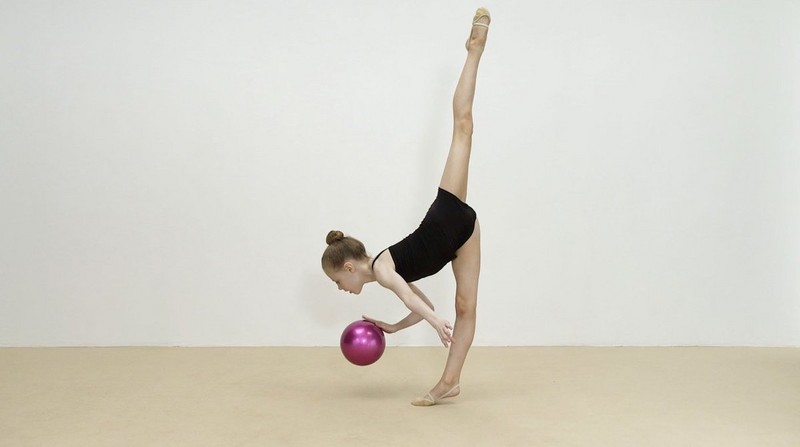 In the South Gallery Dijkstra will present The Gymschool, St Petersburg, 2014 a three channel video installation originally commissioned for Manifesta, the European Biennial of Contemporary Art 2014. This will be its first U.S. presentation.

Beginning with her photographic portraits in 1991 and video portraits in 1996, Rineke Dijkstra’s work has often captured transitional moments within stages of identity formation from childhood through adolescence and has been marked by an intimacy and empathy with her subjects. Highlighting these qualities and others in her new work The Gymschool, St Petersburg, 2014 Dijkstra reveals how physical gestures and forms allow us to decipher the emotional composition of young gymnasts in training at a school in St. Petersburg.

In The Gymschool, Rineke Dijkstra’s new three-channel video installation at the Marian Goodman Gallery , New York, the fundamental concept is rehearsal. We see eleven young pupils at a prestigious gymnastics school in St. Petersburg, Russia, preparing for a competition by bending their bodies into the most improbable shapes. Elements resurface that have fascinated Dijkstra throughout her career, since her earliest beach portraits: control, the line between posing and being yourself, and ways of showing human emotion through abstract forms. These fascinations were already in evidence in Dijkstra’s famous photograph Hilton Head Island, S.C., U.S.A., June 24, 1992, which portrays a girl in an orange bikini searching for the right pose (her hand on her hair, her footprints in the sand). They also came to the fore in her video The Krazyhouse (Megan, Simon, Nicky, Philip, Dee), Liverpool, UK, 2009 in which young people search for the ideal steps so that they can lose themselves in the music and dancing—but how do these people relate to the viewer, and when are they being authentic?

To film The Gymschool, Dijkstra went to the Zhemchuzhina Olympic School in St. Petersburg, where girls are trained in rhythmic gymnastics, an Olympic sport that is like a cross between gymnastics and ballet. Rhythmic gymnastics has five components (or “apparatuses”): rope, ribbon, hoop, clubs, and ball. In each component, the girls are expected above all—even more than in ballet—to show technical mastery. They are expected to assume extreme, almost inhuman poses while suppressing all forms of emotion. This creates a unique tension; the gymnasts must make their bodies as expressive as possible, but they are not supposed to have personal emotions.

Dijkstra opens her film with eight-year-old girls, whose abilities are still fairly limited, and ends with a twelve-year-old who is so physically flexible that she almost transcends her own humanity. The structure of the work reveals a remarkable progression; as the film goes on and the poses become increasingly implausible, the girls seem gradually dehumanized. Sometimes their suppleness makes them seem like animals—the girl in the opening shot twirls like a young spider, and there are moments when other girls resemble a crab, a seahorse, or an awakening caterpillar. At other times the gymnasts look most like abstract sculptures, a fact that Dijkstra underscores by showing them from three camera angles at once and filming them in a white, gallery-like space. That makes The Gymschool much like a visit to a museum where works by Eadweard Muybridge, Henry Moore, and Francis Bacon have suddenly begun to live and breathe.
Meanwhile, perceptive viewers of The Gymschool will notice the continual small irregularities that betray humanity; a leg that will not lift, a stubborn ball, a face that turns a shade too red, a girl’s flash of pride after a superbly executed routine. For Dijkstra, these moments not only reveal potent dilemmas of humanity, beauty, and perfection; she also emphasizes in The Gymschool that the greatest art always emerges where the surface begins to burst open, where perfection shows a crack, where contradictory emotions converge in a single, compelling image. At moments like that, life is captured in all its elusive grandeur—and that is exactly what Dijkstra impressively achieves in this film.

Rineke Dijkstra, born in 1959 (Sittard, The Netherlands), currently lives and works in Amsterdam. She studied at the Gerrit Rietveld Academy in Amsterdam. Her work has appeared in numerous international exhibitions and biennials such as the 1997 and 2001 Venice Biennial, the 2005 Sharjah Biennial, the 2003 International Center for Photography’s Triennial of Photography and Video in New York and the 1998 Sao Paulo Biennial. In 2014 her work was presented in solo shows at the Guggenheim Museum, Bilbao and at the Corcoran Gallery of Art, Washington D.C. A major retrospective exhibition of her work was organized in 2013 by The Solomon R. Guggenheim Museum, New York and the San Francisco Museum of Modern Art, San Francisco. In 2005, The Stedelijk Museum in Amsterdam presented a large overview of her work, which also travelled to Jeu de Paume in Paris, La Caixa in Barcelona and Fotomuseum Winterthur. She is the recipient of several international awards including The Citibank Photography Prize in 1999.
www.mariangoodman.com