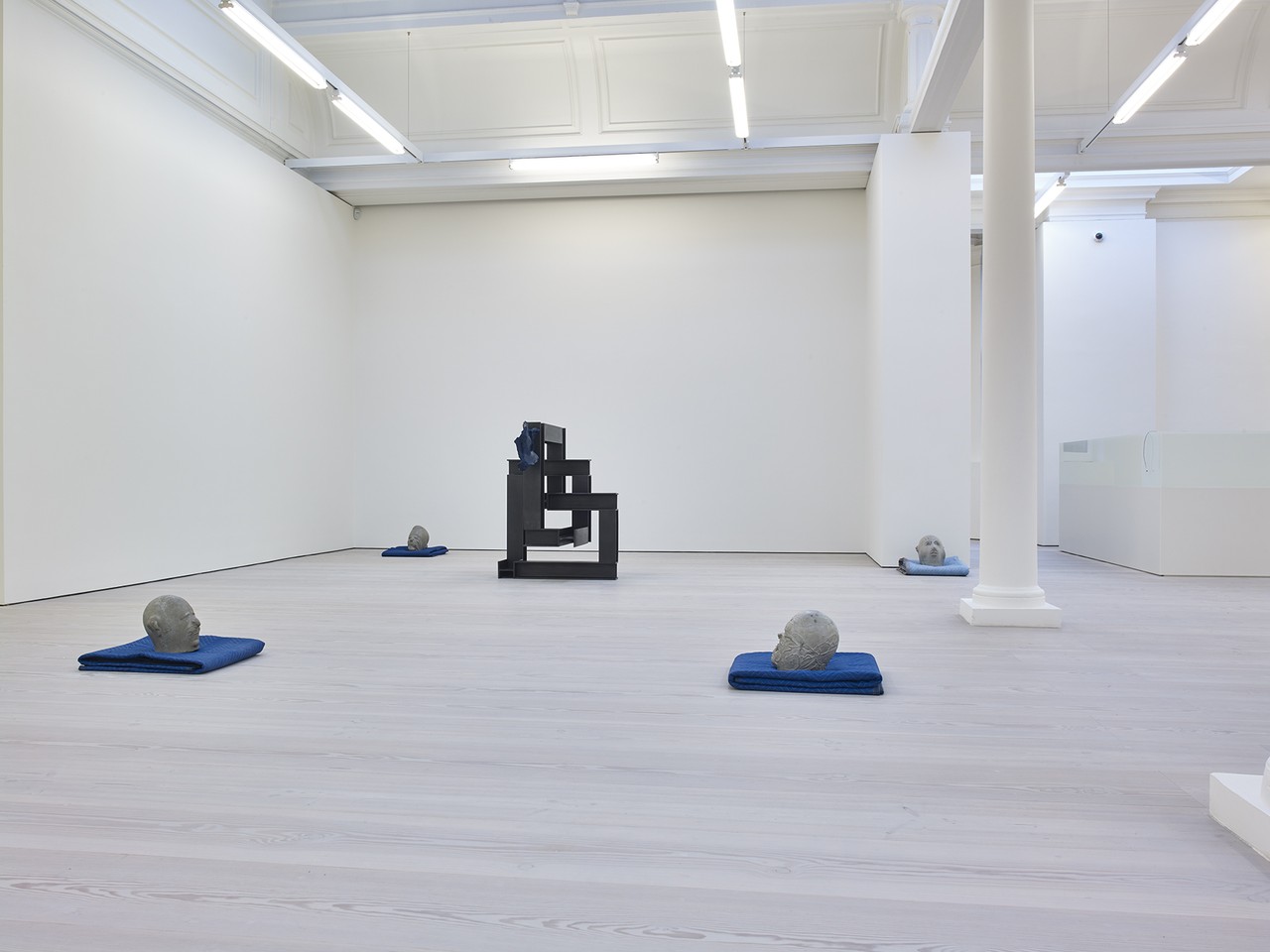 And how can certain contemporary artworks benefit from a critical reflection on the ancient term, ‘sculpture’?

Bringing together the work of four artists from different backgrounds and generations, it is this question that the exhibition Sculpture 4tet poses. To retain the name ‘sculpture’ for the works that comprise the exhibition is to insist on the multiple effects of memory that they deploy. Each of the artists, in their own way, can be considered an enemy of amnesia: mythology, history of art, personal memory and rumours of past events are as much materials as the marble, metal or neon with which they work. The human figure, often taking fragmentary or more metaphorical forms, pervades the works and it is thus the even older concept of the ‘statue’ that echoes in the back and forth of associations of the exhibition.

Luciano Fabro captures the myth of Sisyphus through unprecedented sculptural techniques that bring together inscription and etching. Meanwhile, in homage to Michelangelo, the artist has reimagined the façade of a famous Palladian church as his own musée imaginaire. Jean-Luc Moulène combines the ancestral genre of the mask, notably in its more grotesque manifestations, with the imago clipeata (Latin: ‘portrait on a round shield’). These partially enigmatic and partially frightening portraits refer as much to popular entertainment as they do to the guillotine. Bruce Nauman revisits the silent art of mime, paradoxically in a sound installation that combines wax sculpture and film. Danh Vō inserts a medieval wooden Madonna into his work, in a gesture that simultaneously upturns the logic of the readymade and revives the immemorial practice of reuse, an act that moreover symbolically inscribes her within the heterogeneous nature of the horror film genre.

Drawing, photography, moving image and electric light here complement the three-dimensional objects. The musical connotation of the title of the exhibition evokes a counterpoint of four voices: a colourful baroque fugue whose subject is the idea of sculpture.’

Jean-Luc Moulène
(Born 1955, Reims, France. Lives and works in Paris, France.)
Important solo exhibitions of Moulène’s work have been presented at the Musée d’Art Moderne de la Ville de Paris in 1997, and again in 2009; the Jeu de Paume and the Musée du Louvre, both in Paris, in 2005; the Carré d’Art - Musée d’Art Contemporain, Nîmes in 2009; Dia Art Foundation, Beacon, New York in 2011; Modern Art Oxford in 2012; the Villa Medici, Rome and the Kunstverein Hannover, both in 2015. The artist participated in Documenta X in Kassel in 1997, the São Paulo Biennial in 2002, the Venice Biennale in 2003, the Taipei Biennial in 2004 and the Sharjah Biennial in 2010.

Bruce Nauman
(Born 1941, Fort Wayne, Indiana, USA. Lives and works in New Mexico, USA.)
Survey exhibitions of Nauman’s work have been held at the Museo Nacional Centro de Arte Reina Sofía, Madrid in 1993-94 (travelled to the Walker Art Center, Minneapolis; the Museum of Contemporary Art, Los Angeles; the Hirshhorn Museum and Sculpture Garden, Washington, D.C. and the Museum of Modern Art, New York until 1995); Dia Art Foundation, Beacon, New York in 2002; Deutsche Guggenheim, Berlin in 2003; the Unilever Commission, Tate Modern Turbine Hall, London in 2004-05; the Hamburger Bahnhof, Berlin in 2010; the Art Gallery of Ontario, Toronto in 2014 and the Fondation Cartier pour l'Art Contemporain, Paris in 2015. His work has been included in the Whitney Biennial, New York in 1977, 1985, 1987, 1991 and 1997 and in the Venice Biennale in 1978, 1980, 1999, 2005, 2007 and 2009, when he represented the USA and was awarded the Golden Lion for Best National Participation.

Danh Vō
(Born 1975, Bà Rja, Vietnam. Lives and works in Mexico City, Mexico.)
Recent solo shows of Vō’s work have been exhibited at the National Gallery of Denmark, Copenhagen and the Art Institute of Chicago, both in 2012-13; the Solomon R. Guggenheim Museum, New York and the Musée d’Art Moderne de la Ville de Paris, both in 2013; Nottingham Contemporary, UK and the Museo Jumex, Mexico City both in 2014; and the Museum Ludwig, Cologne in 2015. His work is currently on view at the Palacio de Cristal, Parque del Retiro, Museo Nacional Centro de Arte Reina Sofía, Madrid. Vō represented Denmark at the Venice Biennale in 2015 and participated in the International Exhibition of the 55th Biennale in 2013.

With thanks to “la Caixa” Collection of Contemporary Art for the loan of Bruce Nauman, Shit in your Hat - Head on a Chair, 1990.
www.mariangoodman.com