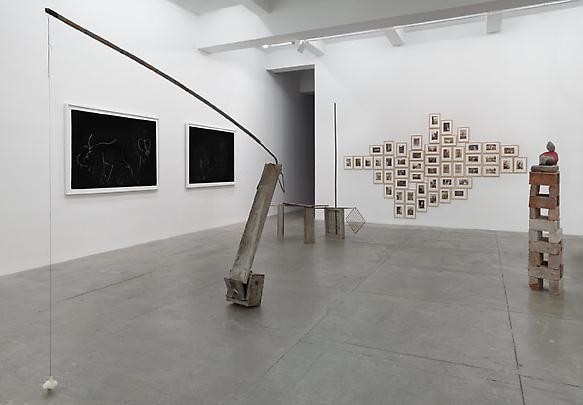 Marian Goodman Gallery is pleased to announce Some Artists’ Artists, an exhibition selected by gallery artists. The exhibition brings together 23 artists of different generations and from diverse geographical areas ranging from Albania, Argentina, Cuba, England, France, Germany, Holland, Kosovo, Portugal, Taiwan, Ukraine and the US.

The artists were chosen according to an open spectrum of criteria, which ultimately rested with the selectors and led to a multitude of voices in which resonances and dissonances emerge.

Information about who has chosen whom will be available at the front desk.

The Albanian painter Edi Hila, the young Kosovar artist Petrit Halilaj, and the South African painter Vivienne Koorland take the realities and recent histories of their respective countries as starting points for their work. Hila, now in his seventies, often portrays loaded structures in Tirana - erected in one political and ideological period and erased in another - that bespeak of a desire to forget history exemplifying what was perhaps only a veneer of democracy. Petrit Halilaj, explores the remnants of the former Natural History Museum of his native Kosovo, a formerly remarkable place before splintered nationalisms disintegrated Yugoslavia, and turned Halilaj and his family into refugees. His animal sculptures, made out of soil and cow excrement are based on the Museum’s former specimens that were replaced by a nationalistic display of folk traditions. Vivienne Koorland’s burlap paintings, SA Farm Map: Settlements and SA Farm Map: Deportations (located on the 3rd floor) contrast historic white settler-owned Farmsteads, dependent upon African labor, with black-owned farms from which the farmer-owners were deported in the 20th century and then appropriated by white farmers.

Boris Mikhailov’s Crimean Snobbism photographs from 1981 were shot in Gursuf, a 19th century resort on the Crimean Peninsula that was once a gathering place for Russian intellectuals. Parodying the activities of the leisure classes, Mikhailov depicts his friends frolicking in a timeless summer idyll, far removed from the harsh everyday realities of his native Ukraine and post-communist Eastern Europe that he has so often portrayed.

Employing a more absurdist kind of humor, Abraham Cruzvillegas’ Self-Portraits are made of “leftovers” from his homeland, Mexico, and any number of international locales. The mass-produced, handmade, manufactured and organic materials are joined together in constructions whose inspiration seems drawn as readily from art history as from the collaboratively-built homes of his childhood neighborhood. Cuban artist Wilfriedo Prieto’s playfully theatrical Piedra iluminada y piedra sin iluminación might be read as a comment on the situation in his home country but ultimately transcends any narrow interpretation, following the best tradition of Latin American conceptualism.

Stanley Brouwn, the legendary conceptual artist whose practice centers on walking, measuring and direction, is showing two of his seminal This Way Brouwn, made between 1960-64 by asking passers-by to sketch for him on paper the way from A to B, then appropriating their drawing by adding his stamp ‘This Way Brouwn’. When the directions were only verbal, the paper remained blank.

In their different ways, Kerstin Brätsch, Jacqueline Humphries, Ian McKeever and Analia Saban probe the vocabulary of (abstract) painting or painting at large. Taking a cue from her own bi-lingual reality, Brätsch employs the language of craft like glassblowing to “shatter the brushstroke”. Her gargantuan marblings are executed with the help of the imported hands of a master paper marbler, pushing one set of hands with another and one language with the help of another. For over three decades, Jacqueline Humphries’ commitment to abstraction has focused on creating paintings that are purposefully “unfinished and unresolved”. On view will be a new silver painting from a series she began in 2000, whose reflective paint constantly destabilizes the viewer’s ability to capture a fixed image. Analia Saban’s The Painting Ball (48 Abstract, 42 Landscapes, 23 Still Lives, 11 Portraits, 2 Religious, 1 Nude) reveals her ultimate deconstruction of painting, constructed like a playful ball of yarn. On the third floor, Ian McKeever’s Assembly Painting, made in response to T. S. Eliot’s poem Four Quartets, is the most classical abstraction on view, with its masterfully rendered elliptical veils and subtle spatial effects.

David Claerbout’s 36-minute long black and white film, The Quiet Shore, shot on the coastline of Brittany, with its famous low tides, has the stillness of photography. The viewer experiences, frame by frame, a single moment from a multitude of different perspectives and viewpoints in what has become Claerbout’s uniquely contemplative style.

Recently, Melissa Dubbin & Aaron S. Davidson’s collaborative practice has centered on actions of recording. Record of activity, made out of high-tech polyester fiber, is placed on the floor in ‘record’ mode, registering the movement of individuals and specific occurrences initiated by the artists in performances, and in ‘play back’ displayed on the wall. Making a Record (Diamond, Ruby, Sapphire, Emerald), takes as its starting point interviews with the gemologist and jewelry designer, Karen L. Davidson, about the stones used to record her voice. The gemstone styli used for the recording were then incorporated into four unique gold pendants. The pendants are worn by different individuals who have, in turn, recorded their experiences while wearing the works.

Kitty Kraus’s Untitled precarious glass constructions, composed of two balancing rectilinear panes of glass, perform an ethereal balancing act with the walls and floor of the gallery, and with each other. As much as you may want to approach these curious constructions more closely, their tenuous transparent forms and sharp edges require you to navigate them cautiously and from a respectful distance. Like someone who unwittingly blocks your path, they serve to remind you that you might be too big for this space, or might be moving too quickly within it.

On view on the third floor is George Balanchine’s seminal ballet Agon (1957), a collaboration with Igor Stravinsky, which is one of the corner stones of modernist dance. Without plot, it caused a wild reaction from the audience when it first debuted with Marcel Duchamp famously saying that he felt the way he did after the 1913 performance of “The Rite of Spring”. Continuing the subject of movement, Etienne Chambaud’s series of collages La Danse is based on a postcard of Irma Duncan, the foster daughter of the American dancer Isadora Duncan. The dance motif is set in motion through numerous cuts and repetitions, creating an illusion of what it represents rather than being a document of a performative moment. An actual kinetic work, Antoine Catala’s Logo to Enhanced Communication (2014), slowly inflating and deflating, seems the logical next development in the age of the omnipresent logo – after logos on fruit and vegetables, a logo for everything and everyone.

Often employing the modernist grid as an ordering principle, Leonor Antunes’ work engages with specific design objects and architecture from the 20th century. The tangle of handmade black leather straps tumbling from her ceiling-based construction references horse bridles and a memory of Carlo Mollino’s 1937 equestrian school in Turin. The delicate hand-knotted net is based on the ancient craft of the gradually disappearing fishing nets in the artist’s native Portugal.

Argentinian artist Mariana Telleria’s work starts with images that “come from the adaptation of a story built between the softest logic and the hardest fantasy”. Often employing found or natural materials, her objects seem to point to a reality that doesn’t always quite seem like ours.

Lastly, Jessica Rankin’s most recent drawings take as their starting point specific night-sky constellations of particular significance. Combining the universal with the personal, the drawing becomes the background for Rankin’s cut-up and reconfigured words. They are, as somebody playfully remarked, her “coming out as a poet”.
www.mariangoodman.com