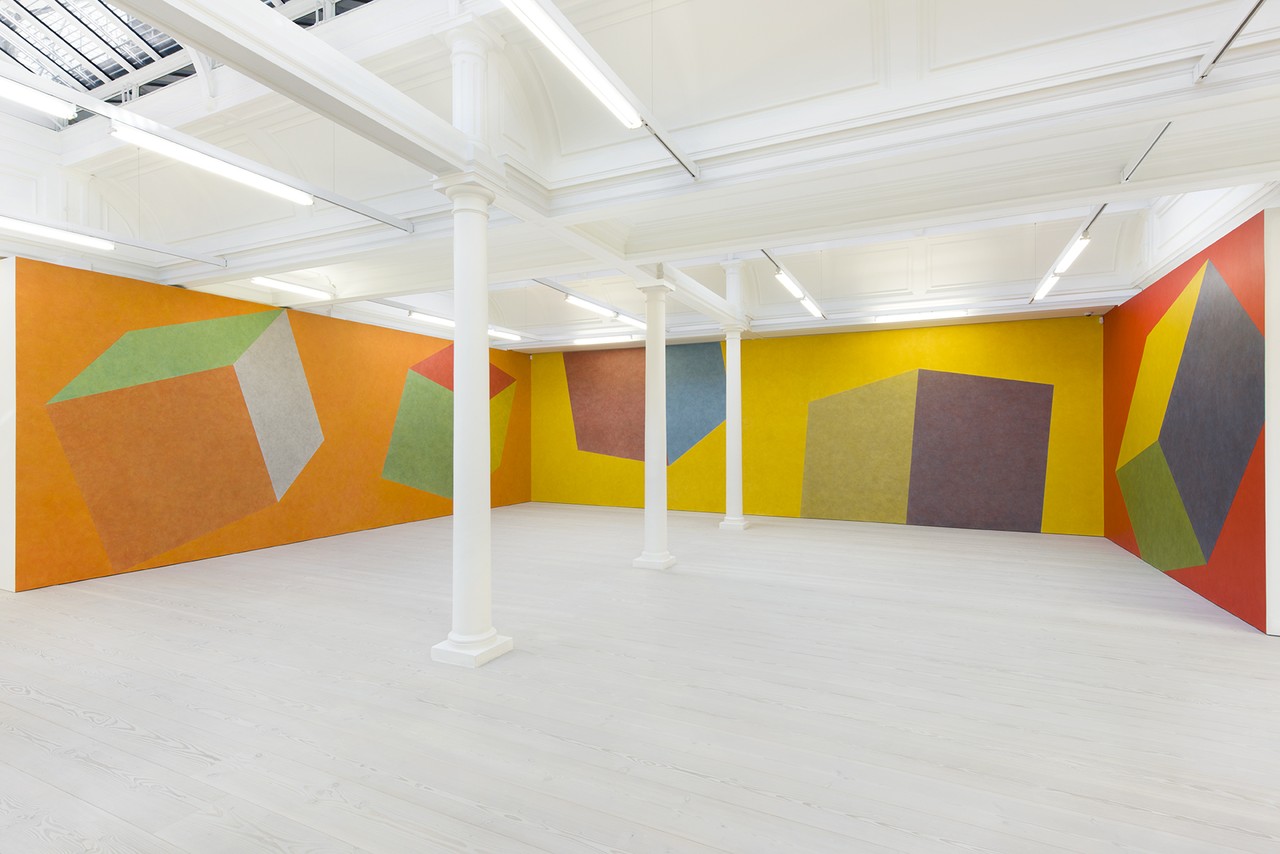 The gallery asks me for a title for the exhibition of five artists – Sol LeWitt, Gabriel Orozco, Gerhard Richter, Ettore Spalletti and Niele Toroni. For some reason, titles really bother me. The finality of fixing something by giving it a name...how on earth can one title cover these five artists?

Sol LeWitt’s rules to be followed to make shapes and lines on the wall, which can never be quite predicted or controlled given the material contingencies of the surface, like the unruliness that the diary attempts to order but ends up revealing. In Gabriel Orozco’s paintings, circles introduce the potential for a flipping into the grid, at once cut-out and cover-up, as if an intersectional flicker, which is a byproduct, had taken over the process. The combination of the machinic and the hand-made, of system and scale, departs from and returns to the body, which is nomadic and displaced but also situated just where it is. Gerhard Richter’s colour strips resulting from the processing through a camera of an abstract painting, digital images fixed between aluminium and Perspex. What painting has become fully absorbed by technology... the “Bride laid bare”. The end result on an axis between abstraction and something to come creates an optical baffle teetering on an edge where they can no longer be grasped by the human eye, as if data visualisations anticipating a techno-being as their reader. Ettore Spalletti creates a chromatic depth though powdery pigment surfaces opening up space as volume as well as placing volumes in space so that the one experiencing this is at once inside, held or suspended, and outside, the two together making a mystery in the strict sense, gentle and tremendous. Niele Toroni’s evenly spaced brush imprints on wall, paper and other materials, measuring its own situation, a reduction of painting to an industrial, de-skilled gesture of the hand that is used to un-frame art and make us think again.

Looking at images, going through catalogues, and knowing the work of most of the artists pretty well, I have some sense about what holds the show together. Early discussions with the gallery circled around the word “immersion.” The exhibition is going to be a sensuous experience, but then there is also a sense of structure to all the work. So... “immersion and structure.” But “immersion and structure” sounds a little too dry, a little too abstract. It’s not wrong but feels a bit misleading, a bit academic..., and it doesn’t capture the sense of relation, which is not really a matter of structure, more of conversation, both internally with themselves and between the works and the artists.

So... there is structure, and there are rules, but also something in much of the work that while rigorous in its application resists being given an identity. In some of the works there is a physical, intensely material occurrence that is contingent, caused by something that just happens to happen but turns into a condition for the work which could just as well, if it hadn’t happened, be otherwise...the bump on the wall, the way the hairs on the paintbrush fall or the flick as it’s lifted off. So what about “structure and contingency”? No, that title is too static, it doesn’t capture the becoming or, for that matter, the extremes. It’s too well behaved.

OK...the show seems to call for poetry, not in some vague and evocative way, but quite specifically: being able to hold the multiple, things that rub up against each other and separate, to acknowledge the abyss beneath it all, and the flights, the order and the disorder, the subjective and the impersonal, the conditions of life and the living of it. But what poetry? After days of coming to nothing, I find my Mallarmé volumes there in my office, collected for writing because for me he is the key to almost everything that has happened in art since he wrote. Maybe he will save me from failure in this title hunt...

I pick up a small white paperback of Mallarmé in Prose edited by Mary Ann Caws. It falls open on page 49, “Mystery in Literature”: “The supreme rifts produced by instruments at play, and flowing from short-lived whorls, explode more truthfully, more directly, in light-bathed argumentation, than any stretch of reasoning ever pursued...” YES... “The supreme rifts” ... the physical spaces between the works...but also the abyss...and the height, the blue, the night sky, constellations, the exhibition as constellation, relations that make a figure. “The supreme rifts” is not quite enough to describe the show, which is not, after all, all rift...how about the relations? What about “proximity”? One thing next to the other...but that seems to neutral, too flat, as if the works are just proximate without really affecting each other, as if they don’t become moments in the narrative that the mind and the senses tell each other as you walk through the spaces, remembering the experience of one work and anticipating another as you give yourself to what you are currently looking at...the relations matter, but in a rigorous way...intuitively but also as thinking.

“Propinquity” comes to mind, a beautiful word, a word to savour in the mouth. It means more than proximity, even if that might be the closest, speaking of an attraction, a besideness that has consequences that might be more than neighbourly. The word seems to combine delicacy with the potential for lust, proper and improper at the same time. I think it needs a little bit of restraining...we’re not talking about fusion. Structure, order needs to come back...and the gap...they might be close, but they are also very, very far from each other...How about measure? YES, FINALLY: “The supreme rifts...a measured propinquity”.

A few days later, I make a trip to the Raymond Poincaré hospital at Garches on the outskirts of Paris to see the Salle des départs created by Spalletti in 1996, a place where, for the last time, the bereaved may be close to their deceased loved ones. I think now I know how to begin...

EXHIBITION DETAILS
A fully illustrated catalogue with texts by Prof. Michael Newman will accompany the exhibition .
The upper gallery presenting Sol LeWitt works will remain on display until May 27, 2017.

Gabriel Orozco
(Born 1962, Veracruz, Mexico. Lives and works internationally)
Following his first exhibition in 1983, Orozco has had solo exhibitions at the Musée d'art moderne de la Ville de Paris in 1995 and 1998, the Serpentine Gallery in London in 2004, the Museo del Palacio de Bellas Artes, Mexico, in 2006, the Guggenheim Museum, New York in 2012, and the Kunsthaus Bregenz, Austria in 2013, as well as traveling retrospectives at the Kunsthalle Zürich in 1996-97, the Museum of Contemporary Art in Los Angeles in 2000–01 and more recently at the Museum of Modern Art, New York; the Kunstmuseum Basel, Switzerland; the Centre Pompidou, Paris; and the Tate Modern, London (2009-2011). He has participated in the Venice Biennale in 1993, 2003, and 2005, the Whitney Biennial in 1997, and Documenta X (1997) and XI (2002). He has received numerous awards, including the Seccio Espacios Alternativos prize at the Salon Nacional de Artes Plasticas in Mexico City (1987), a DAAD artist-in-residence grant in Berlin (1995), and the German Blue Orange prize (2006).

Gerhard Richter
(Born 1932, Dresden, Germany. Lives and works in Cologne, Germany)
Since the 1960s, he has shown internationally and has had a number of traveling retrospective shows including most recently Panorama at the Tate Modern, London, the Neue Nationalgalerie, Berlin, and the Centre Pompidou, Paris (2011-2012). He has been the subject of numerous important solo exhibitions, most recently at the Museum Frieder Burda, Baden-Baden, Germany; the Staatliche Kunstsammlungen Dresden, Germany (2015), the Foundation Beyeler, Basel, Switzerland (2014), the Kunstmuseum Winterthur, Switzerland (2014), and the Museum Ludwig, Cologne, Germany (2013). He has been the recipient of numerous distinguished awards, including the Staatspreis of the State Nordrhein-Westfalen, Dusseldorf, in 2000; the Praemium Imperiale Award, Japan, 1997, the Golden Lion of the 47th Biennale, Venice, 1997, the Kaiserring Prize der Stadt Goslar, Germany, 1988, and the Oskar Kokoschka Prize, Vienna, 1985.

Niele Toroni
(Born 1937, Locarno-Muralto, Switzerland. Lives and works in Paris)
Niele Toroni's numerous international exhibitions include those at the Swiss Institute, New York (2015), the Villa Pisani Bonetti, Bagnolo di Lonigo, Vincenza, Italy (2012), the Museum Kurhaus Kleve, Germany (2002), the Musée d`art moderne de la Ville de Paris (2001), Musée d’Art Contemporain de Bordeaux (1997), the Gwangju Biennale (1997), the Stedelijk Museum (1994), and the Centre Pompidou, Paris (1991). Toroni has also participated in major international exhibitions, including Documenta 9 (1992) and Documenta 7 (1982); the Venice Biennale (1972, 1976); and the Sao Paulo Biennale (1991). In February 2016, the city of Siegen in Germany awarded him with the Rubenspreis and in April his work will be presented at the Punta della Dogana as part of the new exhibition of the Fondation Pinault collections. Niele Toroni is the recipient of the Meret Oppenheim Prize (2012), of the 2003 Wolfgang-Hahn Prize awarded by the Museum Ludwig Cologne, and a French Vermeil Medal awarded by the City of Paris in 2001.
www.mariangoodman.com