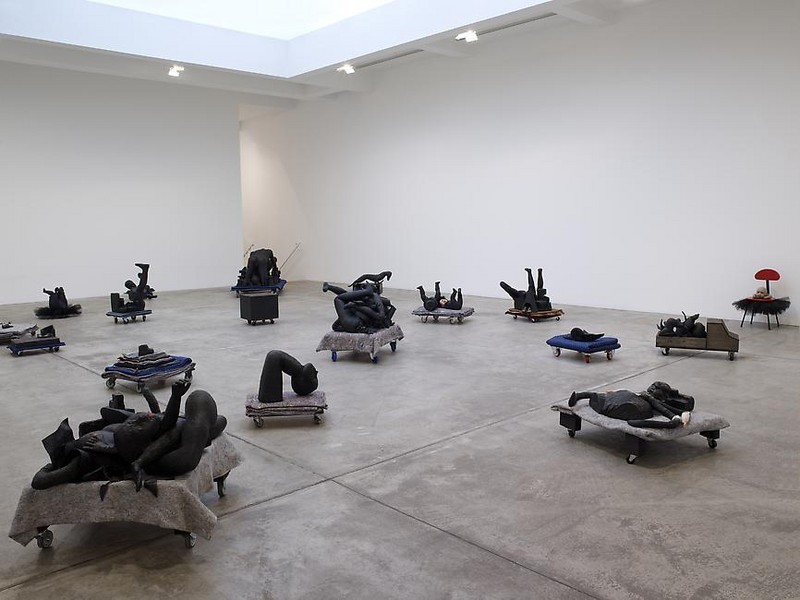 Paris, 26 October 2013 - Marian Goodman Gallery is delighted to announce an exhibition of new works by Annette Messager on view at the Paris Gallery from 13th November to 21st December 2013.

“Mes transports” is composed of twenty-one elements. Sculptures made from various combinations of body parts, geometrical forms, animals and various objects are wrapped in black mat foil. These elements are displayed on wooden trolleys cushioned by folded removal blankets. These transports are in essence as real as they are metaphorical: showing the transportation of goods, of love, of blood, and joy etc...

“They are protected by blankets used by transporters to soften their journey. Some of them are playful, some sinister but together they create a dark humor. Even as separate interties, isolated on their own transports, there is a dialogue between the works. Human body parts, animals, and grotesque characters regress to their own childhood.” explains Annette Messager.

Scattered and static on the gallery floor these islands are in a latent state of mobility allowing various scenarios to arise: “They are all waiting. Have they just arrived? Are they about to leave? (...) Will they be dispersed?» , such are the questions that the artist asks without giving any answer, and explains: “I’m working like a sleep walker; sometimes I feel like a receiver, I’m receiving things, messages (I am a messenger...) and things happen” . We find, once again, this islets idea and equivocal mobility in the “Continents noirs” , presented in the lower space. These fragments, which move in various geometrical forms are erratic, stuck together and evoke the fantastical cities inspired by Jonathan Swift in his Gulliver’s Travels.

These continents don’t drift, they are turned upside down, they may fall. Static above our heads, also covered with mat aluminum foil, their black shadows dance on the wall to the rhythm of the pendular motion of the lights which illuminate the room.

With humor and derision both works explore some of the paradoxes and tensions of our contemporary world. Opening her work to a multitude of readings, Annette Messager concludes without concluding: “ (...) I like various and multiple interpretations, that I have myself, and of course those of others....!”.

In the showroom are some smaller new works: “Pulsions” , an installation of about forty ink drawings, “Icone” , the word written with wire and net, “Le Tutu échelevé” with a fan and “La Colonne du petit chien” .

In 2012, the Musée d’art moderne et contemporain de la ville de Strasbourg organised a substantiel exhibition. The artist is currently preparing a solo exhibition at the Museum of Contemporary Art in Sydney, which will open summer 2014.
www.mariangoodman.com