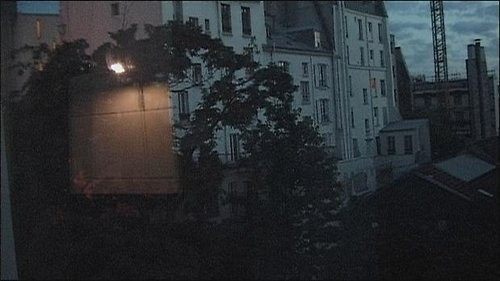 Galerie Marian Goodman is delighted to announce an exhibition of work by Chantal Akerman which will open to the public on Saturday 5th December and will be on view until 9th January 2010.

For this exhibition Chantal Akerman has filmed images and sounds in Paris during the summer of 2009. These sounds and images are installed in the basement gallery; a triptych without bounds.

On the ground floor: An orphan film
Nightfall on Shanghai / Tombée de nuit sur Shanghai, a prelude to Maniac Summer, occupies an area between the movie theatre and the gallery space.
.
Downstairs: from one orphan film to another, constantly evolving.
Without subject or object.
Without beginning or end.
A film that implodes.
Between Eden and catastrophe.

Constantly evolving. Fragmented. The fragments of catastrophes.
A film which multiplies itself at least four times, sometimes five during moments of disaster, when the speed of light seems to be surpassed. Like in Hiroshima. And like in Hiroshima, traces are left but are still appearing.
A film which explodes and slips before dying.
Next to it, ghosts are restless. Continuing their dance of death.

A film which reorganises itself in a landscape,
separates itself.
From black and white to white and black.
Almost unrecognisable.
In often almost abstract forms.
This is what an orphan film can become.
Without author, without subject, nor object. Mute.

Chantal Akerman's work has been part of many retrospectives, the most recent in 2008 -2009 is her exhibition Moving through Time and Space which was shown successively at the MIT List Visual Arts Center, Cambridge, Massachussets, USA; at the Blaffer Gallery, Art Museum, University of Houston, Texas, at the Miami Art Museum, California and the Contemporary Art Museum Saint Louis, USA. In 2009 The Cultural Centre of Brazil Bank, Sao Polo, Rio de Janeiro, Brasialia, Brazil presented a retrospective of her films as did SF Moma, San Franscisco. In 2004 she had a solo exhibition at The Centre Pompidou, which then travelled to SF Moma, San Francisco, USA, to Malba Museo de Arte Latino Americano de Buenos Aires / Coleccion Constantini, Buenos Aires, Argentina in 2005 and in 2006 at the Tel Aviv Museum, Israel.

Her work will be shown at the São Paulo Biennale and an exhibition is planned for MUHKA, Antwerp, Belgium, 2010.
www.mariangoodman.com