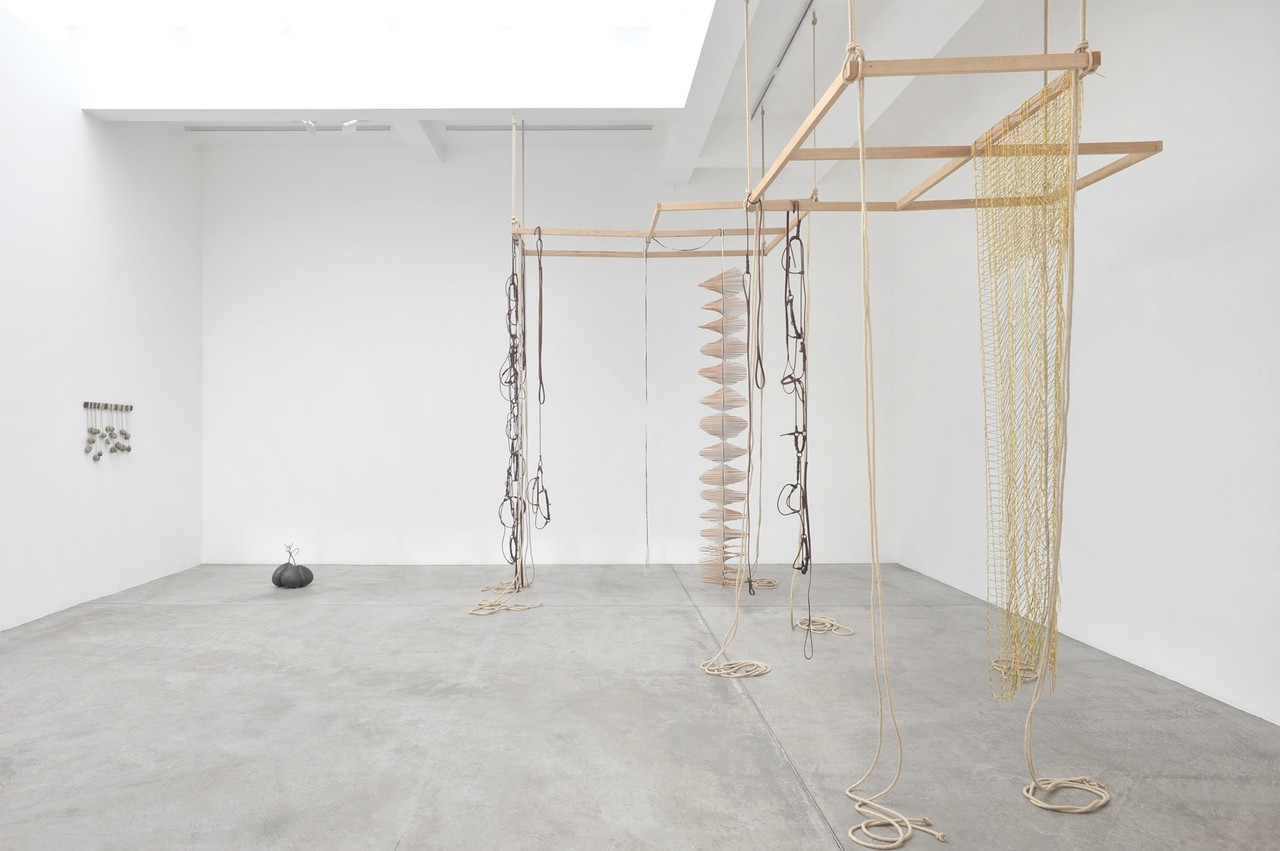 If nothing usually evokes an absence, a lack or a void, it is often at the frontier of nothing in which these artists excel. Through an apparent simplicity, their works both move and impact on the viewer. The pieces displayed in the exhibition (drawings, photographs, paintings, sculptural objects, sculptures or 16mm film) share a similar aesthetic; one that is at once minimal and refined.

By sticking together and painting tiny matchboxes whilst recovering from a serious illness in the 1960s, Lygia Clark (b. Belo Horizonte, 1920 – d. Rio de Janeiro, 1988), created the first of her Estruturas de caixas de fósforos. Alongside the Bichos series, these modular structures are among the most iconic of Clark’s works. Made in aluminum, the Bicho Linear (1960) (a bug or creature in English) is a unique three-dimensional and polymorphic object that, according to the artist, is deeply organic.

Christian Boltanski (b. Paris, 1944) employs salvaged materials such as found photographs and worn-out clothes. The Scratch series (2010), made with images of the Album de la famille D., is covered with a sheet of painted glass that is partially scratched, a metaphor for the fragmented memories of a family. Characteristic of Boltanski’s visual language, the small frames made out of tinplate are softly illuminated, adding a mystical dimension to the work.

Combining recovered objects of various natures and eras, Carol Bove (b. Switzerland, 1971) creates delicate arrangements, which often blur the boundaries of time. Triangles (2015), both monumental and light, is a chain curtain comprised of thousands of small silver beads.

Acclaimed for his ‘non-sculptures’ or ‘anti-sculptures’, Seung-Taek Lee (b. North Korea, 1932) is considered to be one of the leading artists of the twentieth century Korean avant-garde. Influenced by the religious and popular traditions of his country, he has developed a body of work derived from natural phenomena (such as wind and fire) or materials such as stone, rope or wood, as found in Godret Stone (1958) and Tied Stone (1960).

Cord and wood but also brass and leather reworked using traditional crafting techniques are the preferred materials of Leonor Antunes (b. Portugal, 1972). For this exhibition, she presents two suspended sculptures, Anni #14 (2013) and Discrepancies with X (2013).

Nina Canell (b. Sweden, 1979) designs sculptural objects from building materials (concrete, nails, cables, neon) that she meticulously decontextualizes. Mid-sentence (2014) is composed of a concrete base on which lies a piece of telecommunication cable, connoting a lost connection.

Richard Tuttle (b. United States, 1941) is internationally known for his sculptures composed of various elementary materials that defy classification or interpretation. His drawings such as Cognition (2010) reflect the same spirit: “To make something which looks only like itself”.

Some works in the exhibition involve a simple and subtle artistic gesture. Since 1966, painting by Niele Toroni (b. Switzerland, 1937) represent nothing more than their own materiality. For Presque rien, he has made imprints of paintbrush no.50 repeated at regular intervals of 30 cm on three white sheets of paper pinned to a wooden frame on which one can read « Presque rien, c’est tout » (“almost nothing, that’s all”).

Equally, for several decades François Morellet (b. France, 1926) has developed a practice which conforms to a continually renewing system. The neon sculptures from the Lamentable series are the result of the decomposition of a suspended circle in several segments, deconstructing the geometric form. Untidily arranged at first sight, the arcs in fact form a perfect circle.

Rayyane Tabet (b. Lebanon, 1983) executes in situ Waiting for a Manifestation, a single gesture repeated thousands of times. The wall drawing which consists entirely of tally marks ; an ancient symbol which is universally recognizable and easily reproduced.

Le Désir n’est presque rien et pourtant... (Desire is almost nothing, however...) (2015) by Marine Hugonnier (b. France, 1969) is a 16 mm film about L’hermaphrodite endormi, a well-known antique sculpture from the collection of the Louvre. The film would be a simple sequence-shot except for its surprising and subtle special effects.

The imperceptible is one of the main traits of the work of Koo Jeong A (b. South Korea, 1967). At the gallery, the artist uses crystal powder to reproduce the outlines of a drawing in Gravittaya (2015) and creates a low wall composed of hundreds of small magnets in Cedric & FRAND (2014-2015), a tribute to the architect Cedric Price.

The work of Cerith Wyn Evans (b. Wales, 1958) draws its inspiration from literature, philosophy and music and deploys light and sound as well as language. The chandelier We are in Yucatan and every unpredicted thing (2012/2014) subtly flickers to the rhythm of a soundtrack, which includes amongst other sounds the twittering of birds.

Masks (Merkel) (2015) is a series of rose and flesh-coloured abstract paintings by Simon Fujiwara (b. England, 1982). Made exclusively with the high definition make-up products of German Chancellor Angela Merkel, each painting depicts a blown-up image of her face, in which we only perceive the ‘mask’.

Sin título (muy ocupado hacienda nada) (2014) by Gabriel Sierra (b. Colombia, 1975) is a series specially created for the exhibition which explores the frontiers between art, design and architecture. Sierra continues his experimentations into the potential of everyday objects, they are here partially recognizable, almost abstract.
www.mariangoodman.com