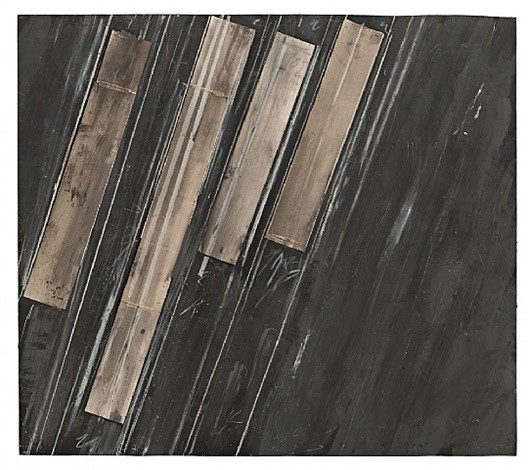 Galerie Karsten Greve is pleased to present the exhibition On Paper devoted to Cy Twombly, one of the most fascinating and indescribable artists of the 20th century. With this extraordinary event the gallery is celebrating the paper works of this major figure who has made drawing the direct expression of the word. Comprised of a rich series of works produced since the end of the 1950’s, the exhibition is the opportunity to pay homage to an absolute protagonist of the history of contemporary art, so hotly contested at the beginning of his career but who lived to see himself definitively accepted. Cy Twombly was one of the first artists supported by Galerie Karsten Greve, which gave him his first one-man show in 1975. Today, with the exhibition On Paper, Karsten Greve is offering the public an opportunity to rediscover the work of a many-sided artist of astonishing sensitivity.

The works of Cy Twombly are at the frontier between drawing and words, to such a degree that the limit between them becomes vague, before disappearing completely. In search of an immediate and intuitive visual language, the artist produces works of abstract composition in which an absolutely touching expressive conscience is hiding. The word and the text, especially that which is fragmented, illustrating ancient poetry, is integrated into the surface through spontaneous letters and signs of gestural calligraphy. Thus the verb that is drawn becomes the sign pronouncing the word. Sappho, Rilke, Keaton as well as Mallarme and Vaughan, whose words Twombly redraws on the surface of his works, resonate in a chimerical composition that leads us back to the roots of the word. With an artistic practice that is anticipated each time by a long emotional preparation, Twombly gives shape to the silent space that exists between words and all that is around them.

Cy Twombly is among those artists who lived through the most important movements of their period, without however definitively becoming part of them. On the contrary, Twombly was able to draw upon the techniques that influenced him and then develop them in an entirely personal manner. In 1950 Cy Twombly arrived in New York, the absolute capital of art and a real field of experimentation at the time. By going through action painting and pop art, which were among the most celebrated movements of the moment, Twombly followed an apprenticeship devoted to exchange and experimentation that lead him to rub shoulders, among others, with John Cage and Robert Motherwell. It was in this context that a real friendship with Robert Rauschenberg was born, with whom Twombly shared a New York studio for a while. Cy Twombly’s American sojourn ended in 1957, the year when the artist moved to Rome where he remained for the rest of his life, though still travelling regularly.

It was in this eternal city, in his studio with a view of the Coliseum that Cy Twombly began the most intense period of his entire career. The exhibition offers several examples of this period – the period in which Twombly produced the leading works of his career. Twombly completed these works on paper dedicated to the sea on the Sperlonga Coast, situated between Rome and Naples: here in compositions that evoke graffiti as much as they do abstract expressionism, the sea is reproduced with horizontal lines and words, most often reduced to signs. The work Notes From Sperlonga, completed in 1959, is emblematic of the tension that is expressive of this period: rapid, nervous lines that seem at first to suggest the incompleteness of the drawing / painting, are in reality the manifestation of a tension that is more profound, this trembling of time that Twombly renders visible. The white of this work represents the sea, which the artist defines as 'white three quarters of the time, just white – early morning'. The theme of the sea, beyond that of water is recurrent in Twombly’s work and plays a fundamental role as that of words and music: in his incredibly rare interviews, the artist often brings up this subject from his childhood memories of Massachusetts.

In 1955, when the artist was not yet living in Italy, the Italian newspaper L’Esperienza Moderna published a brief affirmation of Cy Twombly where the act of painting was associated with a certain crisis, a tension that was proof of a crucial emotional moment. The works on which the exhibition On Paper is curated, reveal this aspect entirely, laid bare most particularly in Untitled (1964) where the graphic action is revealed in all its intensity. The repetition of the gesture, free and liberating, ends by approaching a kind of mute style of drawing where writing is replaced by extreme, stirring action.

Edwin Parker Twombly Jr., known the world over as Cy Twombly, was born in Lexington, Virginia in 1928. He studied at Washington and Lee University from 1947 to 1949. In 1952 the artist won a bursary that enabled him to travel to Europe and Northern Africa. In 1959 Twombly moved to Rome where he lived for the rest of his life, travelling regularly and in particular to Gaeta near Naples and to Lexington. In 1964 Cy Twombly was invited for the first time to the Venice Biennale where in 2001 he exhibited the celebrated narrative cycle devoted to the Battle of Lepanto. The 12 works that comprise this series have been at the Brandhorst Museum in Munich, Germany, since 2009, where one of the rooms was built explicitly to exhibit these canvasses. Cy Twombly’s works have been exhibited in the world’s largest museums and institutions and are included in many prestigious private collections. In 2010, the artist was named Chevalier of the Legion of Honour. Cy Twombly died in Rome in 2011.e Inc.
www.mariangoodman.com