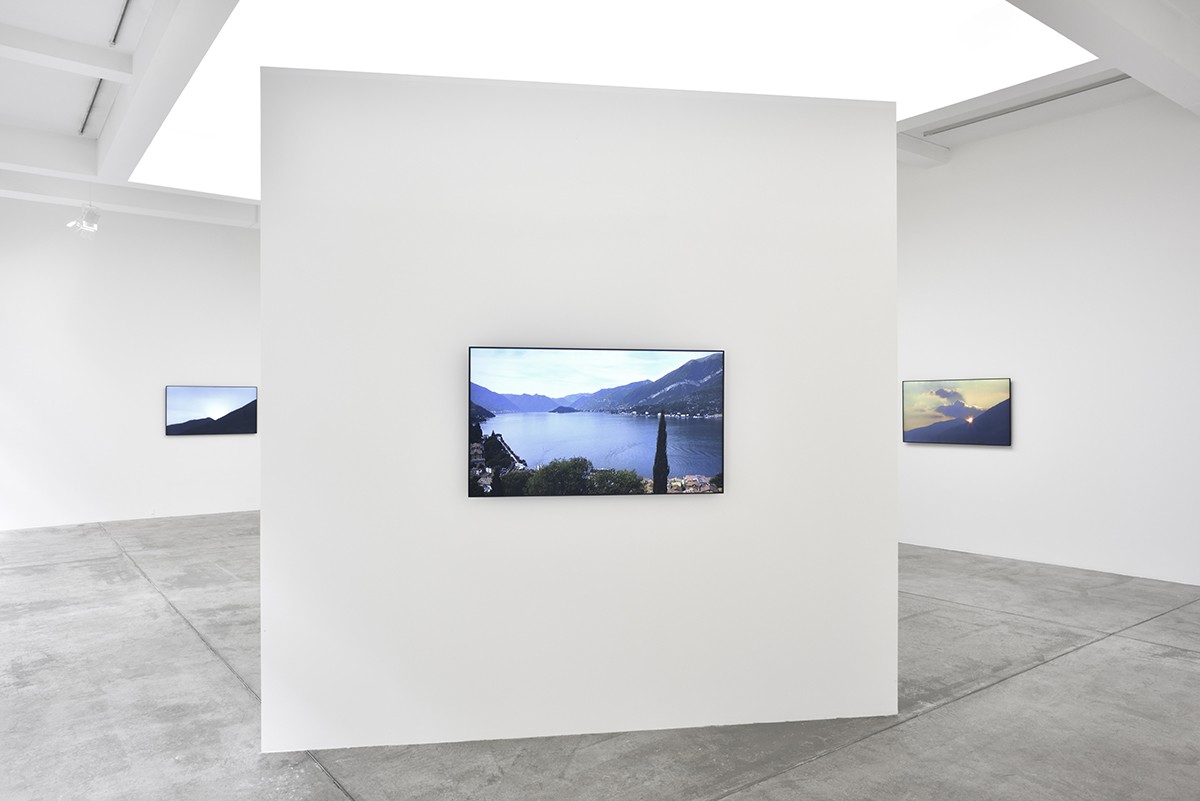 “The works for me don’t bring an answer; I’ve never know how to do that. They always bring a question.”
-Dara Birnbaum

Marian Goodman Gallery Paris is pleased to present Psalm 29(30), a new six-channel video and sound installation by Dara Birnbaum. The genesis of this new work dates back to 2014 when, following an extended period of hospitalization, the chanted Psalm 29(30) provided Birnbaum with the possibilities of healing and became a source of inspiration. This is a psalm of thanksgiving, to be sung in pious solemnity. It is believed it was written upon King David’s recovery from a dangerous fit of sickness, and therefore for Birnbaum the psalm also “addresses the contradiction between light and dark, life and death”.

Upon entering the ground floor of the gallery, visitors first encounter serene images of the foothills of the Italian Alps, which were videoed by the artist in 2011 during her Arts Residency at The Rockefeller Foundation Bellagio Center at Lake Como. Visitors are then invited to enter a central chamber, which houses a video projection portraying aspects of the Syrian Civil War in 2014. These specially selected images from varying Internet sources are historical traces that are intended to be shown with a sensitivity not usually provided by the mass media.

“The whole installation is a meditation on the possibility of healing, an environment formulated so that within its central position one can confront images of war without the spectacle deployed by most mass media and
the news industry.” Dara Birnbaum, 2016

Birnbaum’s concern regarding the spectacle of war recalls Susan Sontag’s questioning of war photography. “Is there an antidote to the perennial seductiveness of war?” contemplates Sontag. With Psalm 29(30), Birnbaum asks the question: “Can suffering be portrayed in such a way that reflection can take place, in place of manipulated fear, anguish, or anger?”

With Birnbaum’s input, Michael Saia edited the six-channels of video and acted as post-production collaborator. The two sound compositions, by Neil Benezra, are unique to this work. Psalm 29(30), as recited by monks of the Carthusian Order, is one primary source material for the harmonious composition playing outside the chamber. Inside the chamber, Benezra’s original composition is inspired by Syrian music. It also combines, amongst other sounds, the melody of church bells and environmental sounds.

A pioneering video, media, and installation artist, Birnbaum made her first video installation entitled “Attack piece” in 1975. She always resisted the idea of limiting video to being solely a projection in a darkened space. She is one of the first artists to have designed complex and innovative video installations, juxtaposing video imagery from various sources while integrating large-scale photographs with sculptural or architectural elements. She is also known for having used groundbreaking strategies when manipulating television footage. Over the past four decades Dara Birnbaum has developed a body of work that addresses both the ideological and the aesthetic characters of mass media imagery, and is today considered fundamental to the history of media art.

Dara Birnbaum’s work has been included in a vast number of important group exhibitions, festivals and biennale such as the Venice Biennale and Documenta, Kassel. Birnbaum has been the recipient of various distinguished awards such as The Rockefeller Foundation Bellagio Center Arts Residency (2011), the Pollock-Krasner Foundation Grant (2011) and the prestigious United States Artists Fellowship (2010). She is the first woman in video awarded the prestigious Maya Deren Award by the American Film Institute in 1987. She cCurrently she teaches in two distinct graduate programs at the School of Visual Arts (SVA), New York. Simultaneously to this exhibition Birnbaum’s work is featured in two groups show at FRAC Champagne-Ardenne, Reims, France and at the Vancouver Art Gallery, Canada. In May 2016 Dara Birnbaum will be honored by The Kitchen Center, New York at their Spring Gala.

Michael Saia is a musician, filmmaker and founder of the film editorial company jumP. His feature films include James Gartner’s sports drama Glory Road (contributing editor) and Jeff Preiss’s Low Down (editor), a jazz biopic. He also worked on the documentaries Living The Legacy, directed by Cynthia Wade and Mission Congo.

Neil Benezra is a composer and sound designer for film, theater, and the arts, as well as founder of Brooklyn Sound Society. He has collaborated with such acclaimed directors and artists as Abel Ferrara, James Franco, Richard Foreman, Joan Jonas, and On Kawara. He has worked with Dia Art Foundation, New York; Museum of Contemporary Art, Los Angeles; Institute of Contemporary Art, Philadelphia; and Museum Moderner Kunst Stiftung Ludwig (Mumok) Vienna; amongst others.
www.mariangoodman.com