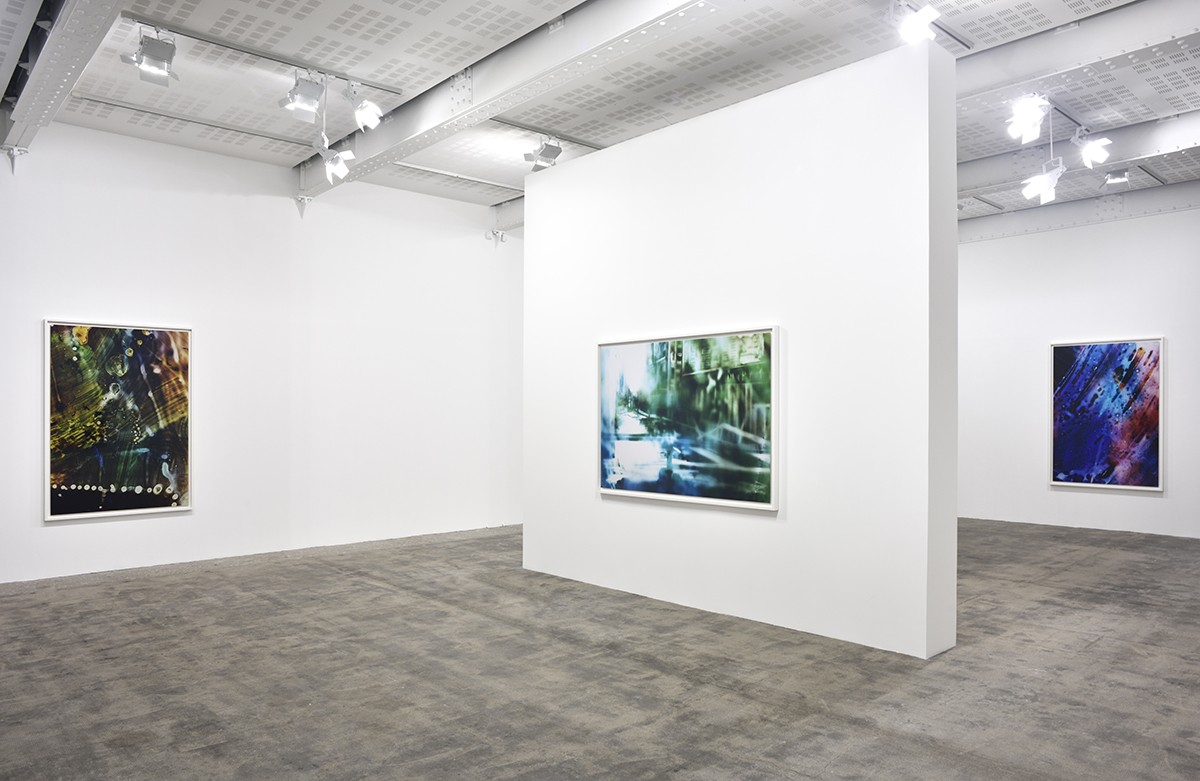 Marian Goodman Gallery Paris is pleased to announce an exhibition by Matt Saunders featuring, for the first time in Paris, a new series of abstract color works and a new video installation. This exhibition draws from many and diverse sources of inspiration including the flood waters of Hurricane Sandy, the Seine inundation of 1910 and portions of Klaus Theweleit’s book Male Fantasies. In Saunders’ work, the flooded territory takes on technical, as well as poetic and metaphoric dimensions. “In the darkroom, you’re always trying to control the spill of light which can contaminate the paper.” Saunders’ artistic practice explores the permeability of images and pushes the boundaries of painting by opening up spaces between painting, photography and film.

The works on paper come from a process in which light is passed through painting to make a photograph. Saunders considers himself to be a painter, even though the final work is often a unique photographic print. Working at times with oil on linen, at times with color ink on sheets of mylar, these materials are used as tools in dialogue with photography.

While Saunders’ process is meticulous there is always an element of the unknown. “I need to work with process. There are things you can plan to say aloud, but the most surprising are sometimes the things that just come out.” It’s only at the end of the process that a work reveals itself and the traces of its fabrication.

Far from being absolute, Saunders’ technique continues to develop, evolve and is often different for each piece. He sometimes combines several methods and negatives to create a single image. “These new pictures still use the matrix of a hand-painted ‘negative’ to make a kind of hybrid image, to move painting into a photographic space, but now the drawings sit both in front of and inside the enlarger, often overlapping or layering to make the photo. And the light and color cross boundaries.” The images in the new abstract series Inondé (Flood) are formally and visually close to his animated films. The polychrome waves and marks simultaneously fill the space and disrupt the boundaries creating an impression of quasi-cinematic movement.

While Saunders’ earlier animated films oscillated between figuration and abstraction, his new film, Flooded Vault, is the first almost purely abstract film and is presented in the vault of the gallery. Made out of thousands of scanned drawings, the film composed of two projections shows a constant flux without beginning or end, one image in perpetual mutation challenging temporality. Part of the film installation, a black and white work by the artist, damaged 2012 by the flooding of Hurricane Sandy, has become a touchstone and a starting point for his recent explorations.

Matt Saunders was born in 1975 in Tacoma, Washington. He currently lives between Berlin and Cambridge, Massachusetts, where he teaches at Harvard College. In 1997 he received a BA in Visual and Environmental Studies from Harvard and completed his MFA in Painting and Printmaking in 2000 at the Yale University School of Art. In 2010 the Renaissance Society of Chicago organized his first solo institutional show, Parallel Plot. He also exhibited at the Tate Liverpool in 2012: Matt Saunders. Century Rolls.

Matt Saunders is the recipient of several international awards including the Rappaport Prize, DeCordova Sculpture Park and Museum (2015), the Jean-François Prat prize (2013) and the Louis Comfort Tiffany Foundation prize (2009). During the run of the exhibition, his works can also be seen in two group shows: Double-take: Drawing and Photography at the Drawing Room and The Photographer’s Gallery in London (April 14 – June 4) and Prix Jean-François Prat, at the Palais de Tokyo in Paris (April 14-17).
The work for this show was supported in part by the Swedish Arts Grants Committee.
www.mariangoodman.com