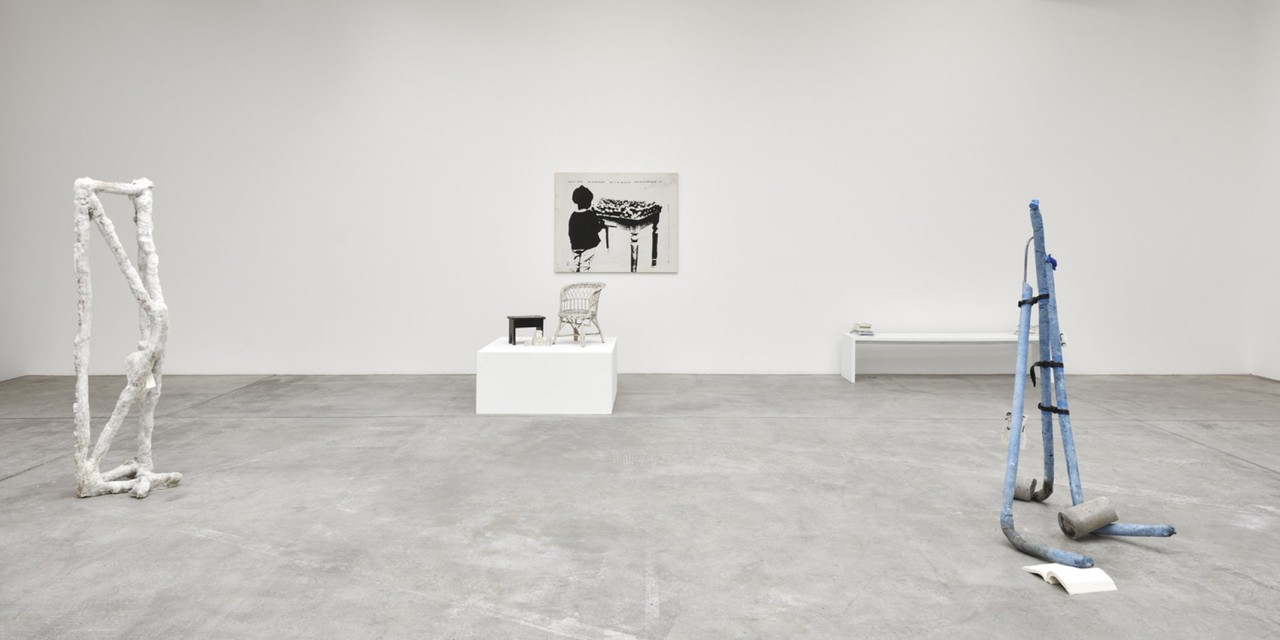 “Born, raised, educated in an exclusively ‘verbal’ milieu and culture, I paint to un-train myself.” Henri Michaux

“There are pure fictions that do not necessarily derive from words or stories, but strike with the power of their visual language instead: one thinks of Michael Dean’s sculptures, Lili Reynaud-Dewar’s performances, Ed Atkins’s videos. In one essay, Josef Strau has been described as “an artist who writes and a writer who makes art.” Within Strau’s œuvre, text is often filtered through his installations, or appears as a complement to Icons, canvases with metallic drawings on view here. One also bears in mind Book and Muscle, a work by Michael Dean, which intertwines the body of the sculpture with the body of the text. A body as public as a book can be, the subtitle of My Epidemic (2015) by Lili Reynaud-Dewar, would in fact perfectly describe the artist’s own corpus. Her long curtains, stained with vermillion ink, evoke a manuscript uncoiling. Bunny Rogers exhibits a doll tied to a stump of a ceramic tree on which rests one limited edition of her Cunny Poems. Warning: no work in this exhibition is required reading. The brain has two very distinct hemispheres; the artists presented here each lead a double life. Henri Michaux “changes marshalling yards” when he switches from poetry to painting. For Marcel Broodthaers and Pierre Klossowski, words seem to come before images—but who can say? The murals by Ed Atkins maintain the deaf violence of his videos and the acuity of his poems, while making this indictment: “Life is utterly miserable because of you personally.” The, A Novel, Robert Filliou (ca 1976) is a mise en abîme of what loving literature means, according to the artist. In addition to the exhibited works, books written by all the artists are available for consultation. Collections of poems by Giuseppe Penone are positioned close to Cocci (1979), his works in terra cotta and plaster. It’s pure fiction for the imagination, such as when one gazes upon "always these few raindrops and / never the storm. / always a partial view" (Winnie's View 28 - 30) (2015), a piece by Win McCarthy which represents the artist’s self-portrait.” Julie Boukobza

Ed Atkins (born in Oxford in 1982) has recently exhibited his work at the Stedelijk Museum in Amsterdam (2015), the Palais de Tokyo in Paris (2014) and at the Serpentine Gallery in London (2014). His work was included in the group exhibition Co-Workers at the Musée d’Art moderne de la Ville de Paris (2015).

Michael Dean (born in Newcastle in 1977) was nominated for the Turner Prize in 2016. A solo exhibition of his work was recently shown at the South London Gallery. The Nasher Sculpture Center in Dallas will dedicate an exhibition to his work, entitled Sightings, from October 2016 through February 2017.

Robert Filliou (Sauve, 1926 - Les Eyzie-de-Tayac, 1987). The M HKA in Antwerp will organize a retrospective exhibition of Filliou’s in October 2016. The Henry Moore Institute in Leeds presented Robert Filliou: The Institute of Endless Possibilities in 2013.

Pierre Klossowski (Paris, 1905 - Paris, 2001). Recent retrospective exhibitions of the artist’s work were shown at the Whitechapel Gallery in London (2006), the Ludwig Museum in Cologne and the Centre Pompidou in Paris (2007).

Henri Michaux (Namur, 1899 - Paris, 1984). In 1999, the Bibliothèque Nationale de France celebrated its centenary with an exhibition showcasing Michaux’s dually literary and artistic approach. Currently, an exhibition on this same theme is held at the Bibliotheca Wittockiana in Brussels.

Win McCarthy (born in Brooklyn in 1986) is amongst the group of artists participating in the exhibition Mirror Cells at the Whitney Museum of American Art in New York. He has also participated in the group exhibition Puddle, pothole, portal at the SculptureCenter in New York (2014-2015).

Giuseppe Penone (born in Garessio in 1947) ) is currently exhibiting new works at MART, Rovereto in Italy. New sculptures will be presented in Rijksmuseum gardens in Amsterdam from June to October 2016. Two exhibitions are also planned at the Marian Goodman galleries in Paris and London for early September 2016.

Bunny Rogers (born in Houston in 1990) presents current work at the Foundation De 11 Lijnen in Belgium through July 16th. In France, she recently participated in the group exhibition Co-Workers at the Musée d’Art moderne de la Ville de Paris (2015).

Lili Reynaud-Dewar (born in La Rochelle in 1975) was bestowed with the 15th Prix Fondation d’entreprise Ricard. Following exhibitions at the New Museum in New York (2014) and the Centre National d’art contemporain Le Magasin in Grenoble (2015), she will have a solo show at the Kunstverein Hamburg this year.

Josef Strau (born in Vienna in 1957) recently exhibited work at The Secession in Vienna (2015); he has previously exhibited at the Renaissance Society in Chicago (2014) and at Malmö Konsthall (2009).
www.mariangoodman.com